It must feel ridiculous for Tom and Susan Higgins now, looking back on those frantic and frustrating days in 2005. They had spent so many hours, so many days searching for the right place to plant their vineyard. Tom had studied geological maps in search of the one component he found essential in his quest for great pinot noir: limestone. Those days, Tom wondered: Will we ever find it? If we do, will we be able to buy the land?

Will this ever actually happen?

Fast-forward to this past Saturday when Tom Higgins found himself complaining about having to remove a rock from his estate vineyard on the slope facing Cayuga Lake. It was not just any vineyard rock; it was a 600-pound piece of dolomitic limestone. The 2012 Tom Higgins could have calmed the nerves of the 2005 Tom Higgins who wondered if he’d ever get that limestone-rich vineyard. And the 2005 Tom Higgins could have counseled his 2012 doppelgänger, “Those rocks might be a pain in the ass, but remember, buddy: We’d have given anything just to have this problem.” 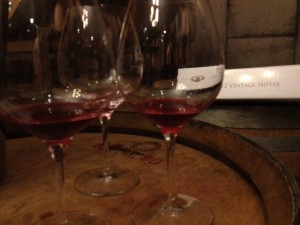 A recent visit revealed a barrel room full of 2012 Heart & Hands estate pinot noirs. They’re separated by clone for now; Higgins also separates the batches by how they’re vinified (all stems, some stems, no stems). And you can taste the same clone in new oak versus more neutral oak.

It’s all there. It has finally happened. This years-long pursuit has become a living, breathing vintage. And it was a spectacular vintage for the launch of a dream.

After the boot camp-like grind of 2011 harvest — complete with heavy rains, disease pressure, and, one would assume, a two-minute pushup fitness exam for all vintners — the 2012 harvest followed a placid, long growing season. It wasn’t perfect (no vintage is), but the early spring allowed varieties time to ripen. The dry stretch of July mercifully dodged the damaging heat spike of triple-digit temperatures. Harvest was mellow. Winemakers had options on when to pick. As Finger Lakes growing seasons go, this was a steady one.

Tom and Susan Higgins could not have asked for much better for the first vintage of their own fruit. In growing terms, this is the third leaf of the Heart & Hands estate; two previous growing seasons allowed the vines to gain maturity without producing wine-worthy fruit.

“Going out and being able to pick our own fruit was fantastic,” Susan said. “What a year to do it.”

Tom, who has put in hundreds of hours manually tending his vines, agreed. “After all the blood and sweat, it is exciting.”

Heart & Hands will continue to work with other growers, combining their own estate fruit with fruit from some of the region’s top sites. And they’ll continue to sort each picking meticulously, still a rare practice in a region with more than a hundred ostensible competitors. The sorting tells the difference from 2011 to 2012. In 2011, Heart & Hands removed as much of 40% of the fruit from some of their vineyard sources to make sure the wines were fresh and clean. In 2012, that number was roughly 5%. “It was just beautiful,” Tom told me. “I’m not only talking about our own fruit. Our growers did excellent work, and I guess you have to say that Mother Nature did, too.”

What to expect from this highly anticipated site?

“That’s a very good question,” Tom said. “There’s a lot we have to figure out in the coming weeks and months.” He’s not sure if estate fruit will make it into the 2012 Barrel Reserve Pinot Noir. He wants to learn more about what he has.

It was fascinating to watch Higgins as he drew sample after sample from the barrel room. It was like watching someone who had baked  a huge batch of cookies but had no idea what ingredients were in them. “Here’s a macadamia nut! Here’s toffee! Chocolate chips! Raisins!” Instead of projecting an air of certainty, Higgins calmly explained that this is the time for open-mindedness. The only certainty he had was in the essential nature of the site. What will it produce, exactly? His job is to guide the grapes as gently and expertly as possible, and then find out along with the rest of us.

But Tom Higgins is far from blind in this adventure. He has come to grasp what the many, many pinot noir clones can add (or subtract) to a wine. He planted seven different clones on his property, and yes, that’s like planting seven different wines. It will be up to him to decide how to use them. Some of the clones are already producing wines of extreme aromatics; some have started their lives more muted in scents while bringing significant heft on the palate. Some are more tannic — one clone is like a leather shoe, the tannins are so pronounced. Some offer bright cherry; others are all herbs and earth.

Preparing to offer seminars that will highlight terroir

For the wine geeks, Tom and Susan Higgins will offer the ultimate in site comparison. For newcomers to wine, it will be an illuminating education. Heart & Hands is preparing to host a series of seminars that will allow participants to taste wines from the various vineyards serving Tom and Susan. But it goes beyond site; by keeping the various pinot noir clones separated, Higgins can offer a unique opportunity.

“Where in the world can you taste from four different sites, with seven different clones?” Tom laughed and shook his head. “Try going to Burgundy and asking for that opportunity. No way.”

Heart & Hands is very likely the Finger Lakes winery that is most connected to its clientele. By that I mean the customers show up with a desire to do more than just buy good wine. They want to learn. They want to understand why Tom and Susan chose this place, this grape, this region. The more they learn, the more they feel connected with each bottle they open. It’s an extremely effective business model that can only be built organically, on authenticity.

The estate vineyard is the next and biggest step in building this business. Seven years ago, Tom and Susan obsessed over the details of the land until they knew that had what they wanted. It’s only a half dozen acres or so, but it’s vital to their future. A small block of riesling at the top, pinot noir covering the rest, limestone stubbornly elbowing its way out of the earth and into the vineyard rows. “It’s a hill of gold now,” Tom told me, nodding to the fall colors.

Not fool’s gold, either. Seven years ago Tom figured this part of northeast Cayuga Lake could become Pinot Alley, with more producers buying land nearby to plant pinot. Today, the Higgenses stand alone. Drive to Union Springs, head up the hill to Heart & Hands, taste the first whispers of estate wine, and ask yourself if Tom was wrong. He wasn’t. Eventually someone else will figure out what’s waiting on these hills. Maybe they’ll even obsess over it. Tom and Susan will smile and nod. They understand.