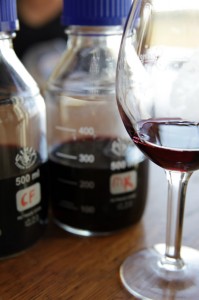 If Arrowhead Spring Vineyards has its way, “Black Friday” will be renamed “Red Friday” on account of its annual day-after-Thanksgiving wine release event where the winery will once again change the landscape of locally grown reds by releasing several from the 2010 vintage, including the Estate Arrowhead Red, Estate Meritage Reserve, Estate Cabernet Sauvignon, Estate Cabernet Franc, Estate Merlot and their 2011 Pinot Noir.

The 2010 vintage was as close to perfect as any for red grapes in Niagara thanks to a long season combined with warm temperatures and dry conditions. I recently had the opportunity to taste these wines from the tank before they went into bottle with winemaker Duncan Ross and his wife Robin.

Ross believes that the assemblage — or careful blending of varieties — is the key to quality and consistency in the reds of the region, which is his highest priority with the Meritage Reserve. The best barrels will find their way into this blend, and this year in particular; there was some consistency in what barrels turned out the best wine.

“The second fill New York oak stood out across the board for cab sauvignon and cabernet franc and were head and shoulders above anything else,” says Ross.

The 2010 Meritage is inky and robust with dark fruit flavors of currant, blackberry, spice and saddle. Two years in oak rounded this wine out but left a hearty portion of tannins for us to savor now or cellar for much later. 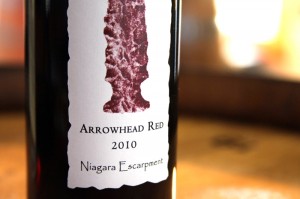 While the Reserve is a showcase of what the winery can do in terms of intensity and quality, the 2010 Arrowhead Red blend delivers as much bang for the buck as any in the country. At $15 I cannot overstate the value it presents while retaining the distinctive character of Niagara. The winery has increased production of Arrowhead from 350 cases in 2008 to 500 cases in 2009 to 750 cases in 2010.

“It’s a competitive marketplace and it’s important to us to have a product that people can afford to drink,” says Ross.

Their single variety releases are usually small and priced at the reserve level between $25 and $30 and the cabernet franc and cabernet sauvignon Reserve wines are just as you’d expect them to be in such a warm vintage — big and tannic — with the cabernet sauvignon yielding more grip and the cab franc showing a tiny streak of green that adds some savory notes and a little more rusticity.

The 2010 vintage marks the first time that the winery has released a Merlot, and for the time being, it’s the only Niagara-grown merlot bottled as a varietal wine. This one is jammy and powerful with big tannins made in an unapologetic style that should age for at least a decade after this Friday’s release. Both Duncan and Robin Ross can’t wait to pour these wines for the public.

“This is absolutely my favorite event where we have a fully stocked selection of not only the blends, but the individual components that make them,” says Duncan Ross. “It’s fun to taste them side by side.”