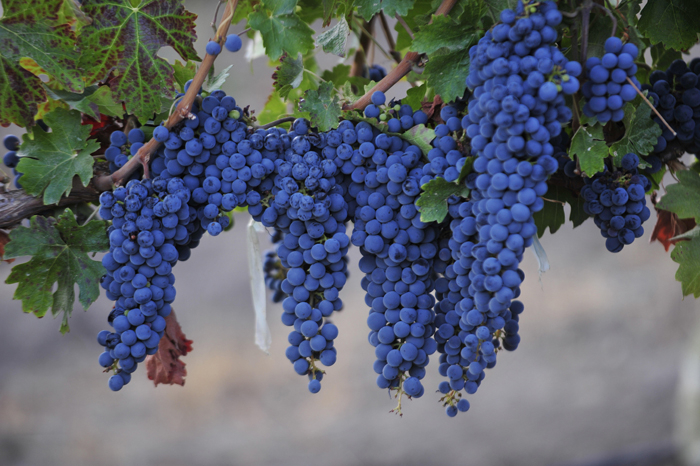 It’s easy to get confused about red wine in the Finger Lakes these days. Is there a ‘flagship’ red variety? Is it pinot in the hands of the right people? Is it cabernet franc, that workhorse that occasionally finds profundity? How about lemberger/blaufrankish? When did that bandwagon hit a massive pothole?

And now here comes syrah. If you grew up on west coast syrah or Australian shiraz, syrah seems an unlikely choice for the Finger Lakes. But that ignores its happiest home, which happens to be the much cooler Northern Rhone. No, Cote-Rotie is not Seneca Lake, but nor is it Napa. Maybe syrah makes sense along New York’s narrow lakes after all.

Vinny Aliperti thinks so. “Everyone should have at least an acre of syrah on the farm,” says the winemaker at Atwater and the owner of Billsboro, both of which make syrah from Seneca Lake fruit.  He says the best Finger Lakes syrah is “inky, leathery, and spicy.” And he even uses syrah in small-to-moderate doses to blend with Bordeaux grapes; the resulting wines are what Aliperti jokingly calls “Super Senecas” in an homage to Super Tuscans. “Think it will catch on?” he asks me. Nope.

If there is a common concern about syrah here, it’s about ripening. Red Newt Cellars made a toasty, fruity syrah in 2007… and haven’t made another syrah since. Some winemakers tell me the fruit — which isn’t grown in a lot of vineyards yet — is expensive and seems to hit a ripening wall right when vintage is taking off.

“It’s challenging, for sure,” says Jeff Houck, owner and winemaker at Lucas Vineyards on Cayuga Lake. “I like working with syrah but I feel like we still have more to learn about growing it.” Like what, I ask? “We have had to use a combo of buried canes along with exposed canes,” Houck explains. “This has caused some variability in ripening. And when we have seen winter injury to the vines, they have to put a lot of energy into renewal canes and have experienced too much vigor.”

Everyone should have at least an acre of syrah on the farm.”
– Vinny Aliperti

But you can’t keep Houck’s enthusiasm for syrah down: “This was a very good year,” he says, “with a good crop and ripe fruit. We are going to continue to work hard to get it right.”

Lou Damiani agrees that syrah is “a winter sensitive vine.” His Damiani Syrah is often the darkest, spiciest of the Finger Lakes offerings. “I am always surprised at how good most of the local syrah tastes, with accents of white pepper and hints of grapefruit rind.” But Damiani offers two warnings: it can be difficult to blend well, because “even a little blended in with other varieties is noticeable,” and it’s prone to problems with vigor. Damiani says, “As with most Finger Lakes reds, to make a good wine you have to be careful about crop load. For syrah, I ideally like two, two-and-half-tons to the acre.” That’s less than most Finger Lakes crop loads, but we’ll save the debate over vine balance for another day.

The winery that seems almost obsessively devoted to syrah is Hector Wine Company, where Jason Hazlitt is in charge of growing the fruit at Sawmill Creek Vineyard. He concedes that syrah is “pretty tricky to grow. It has a hard time surviving the winter and when it starts growing, it becomes very vigorous.” Then there’s the pernicious problem of “bull wood” — and it’s as bad as it sounds. Hazlitt says syrah “shoots a lot of bull wood, which can shade the fruiting zone, so we have to be on top of hedging and leaf pulling.”

So the grape is vulnerable to winter kill; gets too vigorous too easily; and is an inconsistent ripener. Why, then, does Hazlitt agree with his colleagues who are coming to love it? 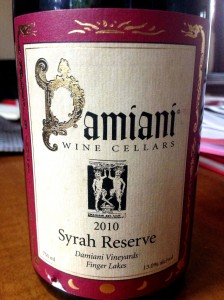 “Because we’ve been able to produce great wine with it,” he says, adding that in better vintages, “it ripens nicely with lush, big berries.”

For HWC winemaker Justin Boyette, the key is being willing to let go of the dream of a varietal syrah every year. “I prefer not to make a varietal wine with reds every vintage,” Boyette tells me. “I want to produce a varietal syrah when it’s exciting.”

Boyette and I spent a Saturday afternoon that melted into Saturday evening, just talking syrah. He has thought a great deal about what to expect when it goes right and how to recognize when it’s not quite ideal. Part of the learning curve has been in recognizing that Finger Lakes syrah simply won’t reach the sugar accumulation of other varieties. “We had a really nice, ripe syrah in 2012, but ripe syrah is not the same here as other varieties. It hits a plateau around 22 brix. We don’t see high sugars, but it can still be physiologically ripe, as it was this year.”

Boyette looks for just a hint of white pepper in his syrah; interestingly enough, he finds that the riper syrah becomes, the less that white pepper character shows in the wine. “I like the white pepper, but not too much,” he says. “It should be an accent, not overwhelming. When there’s just a touch of white pepper, that allows the other flavors to come through.”

Both Boyette and Hazlitt say that Finger Lakes syrah is lighter than many customers expect, but the firm tannins and distinct flavors make it an easy hand-sell. 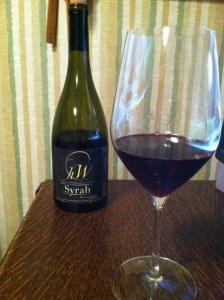 The  Hector Wine Company 2010 Syrah is among the best I’ve tasted from the region. The fruit is dark and subtle behind the earth tones — more soil than herbal — with that flash of white pepper. Boyette chose not to make a varietal syrah in 2011, instead blending it into his red called Essence. The result is exactly as Boyette described a wine with less-ripe syrah: very peppery, but not unpleasantly so, with nice fruit notes alongside.

This not a craze yet. A syrah surge, perhaps? Not even that… there are still just a few handfuls of producers making syrah here. It recalls the buzz for lemberger that hasn’t quite fizzled, but hasn’t exploded into the mainstream, either. And with the mega-popularity of jammy, oaky Shiraz, it’s hard to see Finger Lakes syrah becoming a highly coveted wine any time soon. But that doesn’t mean it shouldn’t be coveted when it’s done well. Not long ago, it was common to hear tasting room servers compare Finger Lakes reds to California.

Today, this is a region much more comfortable in its own grape skin. No one is exactly sure what syrah will become in these vineyards, but no one is apologizing for what it’s not. And that couldn’t be more refreshing.