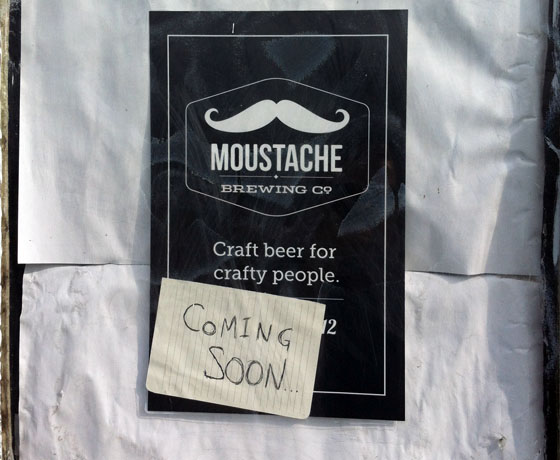 Is your Fu-Manchu feeling fuzzy? Is your goatee getting tingly? If so, that may be because Moustache Brewing Co. is riding its burly handlebar follicles straight into Riverhead this summer. Proprietors Matt and Lauri Spitz are dedicated to awesome facial hair and craft beer — and they are responsible for the new Long Island microbrewery soon to open in the heart of Polish Town. With the help of a highly successful kickstarter campaign launched in 2012, the couple has managed to raise over $30,000 with a list of investors from around the globe.

“We were surprised to see people from all over the world donating, most of who[m] we’d never met” Matt told me.

The Riverhead Industrial Development Agency was also instrumental in meeting the fledgling brewery’s need for a brewhouse location. According to Lauri, “The first person I talked to seemed excited to help us,” which was a far cry from their previous encounters with similar agencies in Nassau County. The Downtown Riverhead Revitalization push has already attracted multiple small businesses back to the area, helping to make it an enticing tourist destination.

Moustache joins Long Ireland Beer Company, which is already operating about a half mile from Moustache’s new facility, and Crooked Ladder Brewing Co., which set to open just a few miles away later this year, to form what coudl become the “Riverhead Beer Trail” — a great alternative for those visiting the North Fork who might prefer growlers to magnums, and hops to tannins.

As for the moustache itself — which can be found on Matt’s face — Lauri says “It’s very important. Some craft breweries deny it, saying it’s all about the beer” but few can deny that branding has become increasingly more essential, with throngs of new craft breweries opening every year. That snazzy tap handle or awesome label can be the added incentive that makes a customer reach for your beer over others. The Moustache brand is not connected to a localized or regional name i.e. Long Island, Riverhead. “It will allow us to grow nationally eventually” the married brewers modestly hope, again noting the need for a “hook”.

In case you haven’t seen any of their merchandise, check out their swag that will continue to raise some funds until the Spitz’s can start officially selling their beer.

Once the brewery receives all necessary permits, its paperwork and completes construction, the converted storage building will house a 15-barrel brewhouse and tasting bar.

I tasted two of Matt and Lauri’s homebrews, starting with the “Everyman’s Porter,” which was exactly that. The lighter take on a porter was dominated by coffee and chocolate on the nose, with an invitingly light palate and mild carbonation.

The IPA I tried came in at a hefty 8.5% ABV that was integrated with the outwardly fruity nose. A balance of hop and malt on the palate melded nicely with a light piney Simcoe hop influence. Matt adds hops a bit later in the boil to extract less bitterness and the result is definitely pleasing to the taste buds. The transition from what are essentially pilot batches of homebrew to full-scale microbrewing shouldn’t be too difficult. Matt notes, “We will only be tripling the volume of the brew from 10-gallon home batches to 30-gallon batches.”

With licensing and construction underway, the Spritz’s hope to see their brewery up and running by late summer 2013. With several day-pouring permits normally issued by the town, you might see them pouring their beers during the Riverhead Polish Festival or at their opening bash before long. And if it tickles your fancy, start growing out that ‘stache now to show your support for local craft beer.