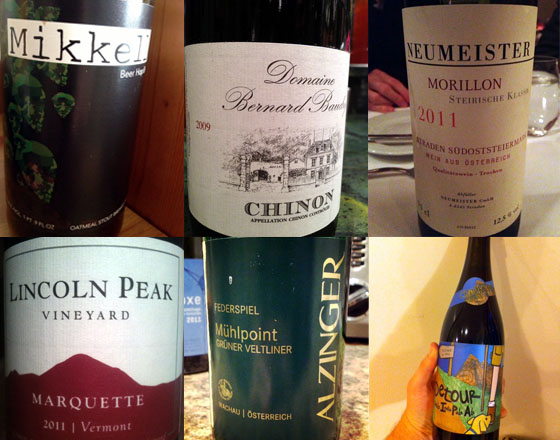 David Flaherty: Mikkeler, Beer Hop Breakfast
Despite the fact I am writing this as the sun is coming up, I am decidedly not having this beer for breakfast today. Call me a wuss, but I tend to shy away from 7.5% abv beers before my morning Fruit Loops.

For those of you not familiar with the Danish brewery, Mikkeler, it’s worth noting that it at the forefront of the new wave of “gypsy brewers.” Not possessing a brewery of his own, Mikkel Borg Bjergsø bounces around the world’s breweries like a mysterious phantom and spins off collaboration beers using others’ brewing equipment. To date, he has produced over 500 different beers, and is known for rocking the traditional boat and pushing the envelope as to what’s possible to do in a brew kettle. A bit of a deconstructionist, he’ll often make a base beer, and then release multiple single-hop versions of it to educate beer drinkers and shake up existing styles. (He’s also done this with different barrels and yeasts).

In this particular version, he started with his well-known coffee stout, Beer Geek Breakfast, and hopped the hell out of it. Creating a beer that drinks somewhere between a coffee stout and a black IPA, it’s a bit of a mind boggle. Coffee and roasted grain notes mingle with aromatic hops on the nose; not an aroma one often finds together. On the palate, it’s bitter and resinous, swirling with coffee flavor, but with a creamy mouthfeel from the use of oatmeal in the mash. A full-body full-palate press on this one…okay, maybe I should hit this up for breakfast soon. But I will certainly need to clear my day of all responsibility, and have a pillow near.

Amy Zavatto: Bernard Baudry 2009 Chinon, Loire Valley
I fell pretty hard for the wines of Bernard and Matthieu Baudry when I was extremely fortunate enough to visit them at their winery in the Chinon area of the Loire Valley a couple of years ago. Since then, I try to buy up what I can afford of it from Chambers Street Wines (a big lover and supporter of the father-son duo’s beautiful cabernet franc). This is their sort of entry-level cab franc, I suppose, at about $17 a bottle.

The Loire Valley has been seeing some pretty serious drought conditions over the last few years, which I saw first-hand with the bottom of the riverbed poking through at several points along its windy way. I can only guess that the heat and dryness is what’s giving this much more of a full, plushy mouthfeel (and a higher than expected 13% abv) than the trademark linear-ness that I expect from this area of the world, but that’s not to say it’s a lesser Chinon (in my meager opinion…).

The appearance is super dense and while the nose definitely has that calling-card pencil lead thing going on, it’s also got some apparent notes of ripe black plum and blackberry, a trace of flowers, and a cool sort of dried mushroom quality that I was really digging. In the mouth, it was fuller off the bat than Loire fans might expect, and the fruit is right there in that round, juicy first sip, but then… crazy rock-licking minerality, super fine-grainy tannins, and a tongue-blanketing dryness that reminds me of when you eat a banana that’s not quite ripe (which is not at all to say this tastes like bananas! Because that would BE bananas – just think: Green Banana Effect). Left me with a vaguely smoky finish that I could sense all the way to my nostrils. Dig it!

Oh, and P.S. On the wall of the Baudry’s winery office is a menu from the a Gramercy Tavern where their wine and several from New York State were featured in what sounded like a pretty awesome Cab-Francophile dinner a few years back. It totally made me smile to see that so far away from home.

Len Dest: Dr. Heidemanns-Bergweiler 2011 Riesling Moselle Deutscher Qualitätswein, Bernkastel, Germany
For more than fifteen years I traveled for business to Betzdorf, Luxemburg which is adjacent to the Mosel wine region and developed a love for the Mosel Rieslings.

About 40 miles to the Northeast of Betzdorf along the Mosel River is Bernkastel, Germany a major Riesling production center.

Dr. Heidemanns-Bergweiler is one of the most renowned estate Riesling producers in the area. The Bergweiler family began winegrowing in the early 16th century. The estate riesling vineyards are planted on slate soil on the hillsides overlooking the Mosel. All wines are fermented and aged in stainless steel tanks.

This is a very modest Mosel riesling and is rated as a very good QPR (quality-price ratio) riesling in the German classification system. It is very crisp with just a bit of sweetness and low (9.5%) alcohol. The aromas are more apple and peach scents than many rieslings. The overall flavor is clean with some minerality.

While this wine can easily be sipped without food, it really shines when paired with spicy Asian dishes, such as a Thai Penang curry or red curry.

Tracy Weiss: Weingut Neumeister 2011 Morillon Steirische Klassik, Austria
I tricked everyone. My girlfriends allowed me to pick the bottle for our first course and I pulled “I don’t like chardonnay, I’d rather have pinot grigio” wool over their eyes.

At Wallsé, a fantastically modern and minimalist Austrian restaurant in Manhattan, we required something with enough acid to balance the richness of the
cuisine, but with enough heft as not get lost. Those silly bastards didn’t know that the Morillion from the Austrian Styria region they were sucking down to compliment their Quark Spätzle with braised rabbit, root veggies and king oyster mushrooms was of the dreaded “C” variety.

On the nose and on the tongue, I found a lush fruit salad of tangerine, stone fruits and tropical flowers. The wine had a powerful finish but remained elegant. Clean. Delicious. I got the last glass. Suckers.

Todd Trzaskos: Lincoln Peak 2011 Marquette, Vermont
Not too far from where I live, just over a pass across the Green Mountains, the Granstrom Family has been setting the bar for production of this University of Minnesota-released red grape called Marquette.  Their 2008 busted onto the scene and drew attention from the “Drink Local” likes of Richard Leahy’s Wine Report and Carlo DeVito over at the East Coast Wineries blog, as well as taking a double gold medal and a “best in show” at the 2009 International Cold Climate wine competition.

Tasting these wines year after year, my appreciation continues to grow with regard to how well Lincoln Peak fruit is cared for, and the increasing sensitivity with which they handle their wines.

2011 is no exception, especially in a cool, wet vintage where most Marquette wines I have tried show thinner fruit and body and are not the finest examples of this new grape.

Smells like  a leafy Raspberry bacon glaze on a black pepper encrusted steak. Bright tart red raspberry fruit, quite cheeky acidity, wide lively mid palate, turns dark to sour cherry skin.  Structure is acidity not tannin. Judicious use of oak leaves the fruit room to lead.  Held up very well, sampled over three days, just sitting on the counter.
It may have been a weak year, but it will be very interesting to see what becomes of this wine, if cellared for a couple of more.

Mark Grimaldi:  Alzinger Muhlpoint Federspiel 2011 Gruner Veltliner
I LOVE Gruner. But tonight, I am sick of Gruner. The aromatics can make me feel kind of “pukey.” It’s this aspirin-y, lemon curd thing that sometimes just gets my gag reflex going.   I don’t know why it is. It’s not the wine, it’s me.  (sounds like a breakup doesn’t it? “It’s not you, It’s me…”).

Last week, I bought the last bottle of this wine that was available for sale to the trade. I don’t drink much alzinger. It’s not readily available. It’s just a tiny producer in the Wachau making about 5,000 cases annually of which not much is imported. It’s reached “superstar” status over the recent years. So I saw a bottle and grabbed it like I was snatching up the holy grail of Austrian Gruner.

Well to some I was, but to me, this wine is just “good”. But I can’t blame the wine. There are other factors. First off, we are coming off the heels of the 2010 vintage, which in Germany and Austria we had some OUTSTANDING wines.  2011 so far in Germany and Austria has not excited me outside of a few wines here and there. The wines have felt a bit “watered down”. (Maybe it’s because I drank bathtubs full of 2010s for the past year and a half?!  Most of which were fruity and ELECTRIC). Second, I am just tired. My kids and life right now are literally sucking the will to live right out of me (in a good way though!). Parents, you get me right?

Honestly, this wine is not lacking anything.  It’s all there — aromatics, fruit, acid, finish.  It’s a perfectly good wine.  It’s just not wowing me right now and I really wish it would, because I don’t have the energy to try and conger it up.
DAMMIT, I EXPECTED MORE FROM YOU, WINE!
I will just have to try again tomorrow.
Gibson Campbell: Uinta Crooked Line Double India Pale Ale
I picked this beer because of the packaging, no bs. I’m a sucker for 750 ml bottles with cork, cage and a great artist rendered label. There’s something romantic about it.
The beer pours a beautiful red color with a tan head and great retention. The lacing grips the glass and measures the 7 gulps it took to get it down. With the aesthetics out of the way it was time to dive in. There was a definite biscuit like character on the nose and just a hint of pine provided by the four hop varieties used. The alcohol was dominant and kind of bit me in the nose. As someone who doesn’t care for high alcohol aromas in beer or wine, this was a turn off for me. Maybe they shouldn’t tout the high alcohol so proudly on the label. Starting to regret my whimsical purchase.
The balance on the palate was of some consolation. Ample fruit, spice and a raisin-y component carried the ale with a nice creamy texture throughout. Some of the biscuit character was also apparent on the long bitter finish. I ended up mostly satisfied with my haphazard purchase of the week. Enjoyed it out of a tulip glass with a meaty pasta sauce and strong stilton which turned out to be a good pair.