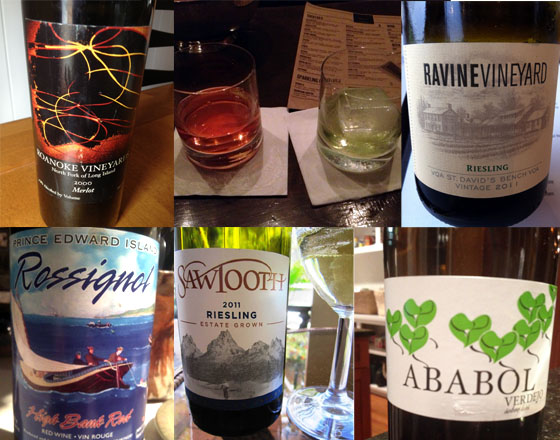 Lenn Thompson: Roanoke Vineyards 2000 Merlot
I could have gone in any number of directions with this week’s WWD submission. A gathering of like-minded friends and their families brought many delicious libations to my lips over the weekend. I drank two of the best chardonnays of my life — Pierre-Yves Colin-Morey 2011 Saint-Aubin 1er Cru En Remilly and Dauvissat 2011 “La Forest” Chablis. I sipped some great beers from Boulevard Brewing in Kansas City.

But, as the local wine guy, I just had to write about this bottle of Roanoke Vineyards 2000 Merlot — the first wine ever released by a winery consistently on my ‘must visit’ for anyone visiting the North Fork.

Back when this wine was still available in the tasting room, a local writer remarked that this merlot “lacked fruit” — which wasn’t true then and isn’t even true now. Fruit flavors are certainly not center stage 13 years into this wine’s life, but it’s still there, in the background, along with the earthy, graphite and faint herb notes. Mouth-filling with slightly dusty tannins, I think this wine has some time ahead of it, though it’s hard to know if it will improve much more. That said, I’d love a half case to stash in my cellar and enjoy over the next few years.

Evan Dawson: Absinthe and Sazerac
The mixed drink movement is surging, and nice to see it represented so beautifully in Rochester. The city’s finest wine bar, Solera, has been open in the south wedge for the better part of a decade. Upstairs, the new Cheshire opened 12 months ago.

What a list. Classic, throwback, and respecting tradition, Cheshire is impeccable. At least, it is to my untrained eye. I have a fascination with mixed drinks, but nowhere near the constant flame I hold for wine. My wife and I visited Cheshire to relax and learn.
The mark of great service is an adaptable level of comfort. Novice? No worries. Overloaded with knowledge? Not moreso than the outstanding staff, who will trade ideas with you all night.
A little absinthe for me (watered a bit; I was driving) and a vintage Sazerac for my wife. Mine was just what you’d expect, minus the oft-rumored but rarely experienced hallucinations. My wife’s was delicious, not cloying, and a visual treat.
I wonder if this movement is a bit like the swing dance craze in the late 90s. Here today, gone…? Not too soon, I hope. The list at Cheshire is long enough to keep us coming back.

Todd Trzaskos: Rossignol Estate NV High Bank Red (Marechel Foch)
In anticipation of Taste Camp 2013, I pulled out this Prince Edward Island red that my parents gifted me after their trip to the eastern provinces this past summer. This a non-vintage blend of Marechal Foch which is a sister seedling to Leon Millot.

It has a packed peppy nose of black pepper, cherry and BBQ sauce, which after the warm sunny day today, was a nice reminder that summer is near. On the swish, it bobs around a bit, like the boat on the label, with brambles, dark fruit, sour acidity, woodiness and spice sloshing around in a way that makes it a bit unsteady, but an still an interesting ride.Very light in body, and active with cranberry tartness, the linger is tannic, but not overboard.

Len Dest: Sawtooth Winery 2011 Riesling, Snake River Valley, Nampa, Idaho
We are planning our summer vacation to Idaho, Montana, and Eastern Washington, including visits to the Columbia Valley and Walla Walla wine regions in Washington, as well as the emerging wine regions of Idaho. There are around 50 vineyards in Idaho, in the Western part of the state adjacent to Oregon and Washington. Frankly I did not know much about Idaho wines and had not tasted any. But after a little searching I found the Sawtooth Winery 2011 Riesling.

Sawtooth Winery was founded in 1987 as a Pintler Cellars in the Canyon County region of the Snake River Valley in South-West Idaho. Seven acres of European vinifera vines were planted in 1982, including Chenin Blanc, Riesling, and Semillon grapes, and in 1983, four additional acres were planted, including Cabernet Sauvignon and Chardonnay. More recently, the vineyard has new plantings, including Syrah, Pinot Gris, Cabernet Franc, and Viognier.

The wine is a very light straw color with aromas of pears and apricots, with a medium body and flavors of pear with abundant minerality and acidity and just a touch of sweetness, that is more fruitiness than cloying sweetness. Great for sipping, great with Asian dishes, but equally well matched to poultry dishes and pork dishes.

While not a truly outstanding riesling, this is a very good-to-excellent riesling. I hope other Idaho wines are equally as drinkable.

Thankfully, the one I had on hand happened to be the right bottle.

This Verdejo was simple. Not boring, but beautiful in its simplicity. It had to be in order to mesh with the rich Saffron and potpourri of seafood.

Being from Rueda, I expected freshness and a steely brightness that comes from more than the tanks. And I got it. Lemon curd, unripe peach and some sort of honeyed flower, perhaps the Ababol — a native wild flower like a poppy that the winery is named for. Acid ripped right through the heaviness of the dish. Subtle in the mouth but with a full-bodied finish. Fewer than 1,000 cases made from this family-owned Castilla y Leon producer. I gotta get some more to keep its countrymen (Rioja & Cava) company in the stacks.

Katie Myers: Ravine Vineyard 2011 Riesling, Niagara
You’d think that being geographically close, Finger Lakes Rieslings would share a lot in common with Niagara Rieslings. They don’t. And beyond that, this one’s even more different.

This lovely little gem comes from the St. David’s Bench VQA (yes, Niagara has VQAs, another difference from the Finger Lakes). Out of 28.8 acres, riesling only accounts for 1.8 acres of the vineyard plantings. It is situated in a small, cold patch, removed from the lake and thus its moderating effects. What the winery discovered after planting, though, was this patch is a frost pocket, creating a haven for botrytis every year. Each year, 20-30% of the Riesling grapes are infected with noble rot (except in 2010, when a whopping 45% were affected by the condition), lending a subtle earthy, savory deliciousness to the wine.

The semi-dry wine paired beautifully with a cream of wild mushroom soup (the acidity of the Riesling cut through the cream nicely, and the umami of the botrytis was congruent with that of the mushrooms). It also held up well to a ruby-red brook trout, which was texturally balanced with the wine.