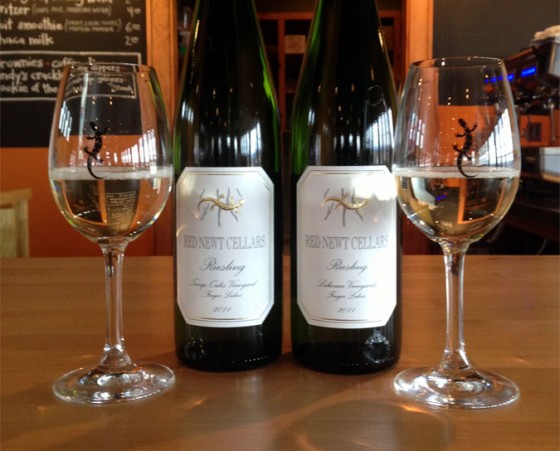 The hottest winemaker you’ve never heard of is Kelby Russell, a soft-spoken, music-loving globe trotter with the work ethic of a stubborn ant. Russell, an assistant at Red Newt Cellars, learned under Peter Bell at Fox Run and spent several winters in the southern hemisphere, where it was harvest time. He’s gained a reputation as a fast-learning workhorse.

So why is he back home in the Finger Lakes, instead of extending his overseas adventures?

“Sweeter rieslings are really what have kept me, after my start in 2009,” he explains. He was smitten by the balanced, rich rieslings from Germany while attending the Riesling Rendezvous conference in Seattle in 2010. “Riesling in the Finger Lakes mostly meant dry, semi-dry, or sugar water,” he says, and he became determined to produce serious wines in that richer style.

And why not? The Finger Lakes region provides a natural bounty of acidity, which provides winemakers options. The driest rieslings are very difficult to pull off with balance; they require tremendous depth of fruit and a deft touch in the winery (see Ravines and Forge for examples). Russell wondered why sweeter rieslings were viewed the same way that magnums were viewed locally: for beginners, novices.

“Serious wine has for decades been defined in this region by what it is not,” Russell observes. “Not Niagara; not hybrids; not sweet. The idea that a wine with some residual sugar, let alone a pile of residual sugar, could be as serious as a bone-dry riesling would have been remarkably iconoclastic only a decade ago.”

It is no surprise, then, that Russell is thrilled to be part of the winemaking team at Red Newt, where there are now three separate rieslings aiming for that richer style. (He joins the operation that has been led by Dave Whiting and Brandon Seager; Seager departed last year.) The hangup, it seems, is choosing a word to describe the style.

Sweet – a term that seems to come with training wheels attached

Late Harvest – a term that is too often associated with dessert wines. The regional flagship in this style is the world-class pair of late harvest bottlings from Hermann J. Wiemer, which have shown a consistent ability to improve with age. However, at stores like Century Liquor in Rochester, this wine is relegated to the dessert wine aisle, even though Wiemer produces a separate wine for dessert purposes.

Spatlese – The Finger Lakes isn’t Germany. Why hijack the term? More often than not, this growing category of Finger Lakes wines would be classified as Spatlese in Germany, but some would fall under the Auslese banner. (Very few would be called BA or TBA, the true dessert classifications.)

Perhaps someone will coin a new term soon, because the list is growing.

Fred Frank, owner of Dr. Konstantin Frank Vinifera Wine Cellars, explains that the Dr. Frank Riesling Reserve fits into this category. “I believe the sweeter rieslings fill a niche between the semi-dry and late harvest styles,” Frank says. “The wonderful, high natural acidity balances off the higher residual sugar with flavors of peaches and apricots.” The Dr. Frank version sells for $25; it’s a step up in price from their standard riesling bottlings, which is true for most wineries’ richer rieslings.

Another big fan of the movement is Kris Matthewson, partner and winemaker at the new Bellwether Wine Cellars and an assistant at Atwater Estate Vineyards. “This is something I’ve been promoting since the day I started in this region,” Matthewson says. “The first wines I fell in love with were Spatlese and Auslese. We’ve been making wines in the German style, toeing the lines between Spatlese and Auslese at Atwater.” Matthewson sees plenty of room for improvement in the Finger Lakes. “We should be doing more layered picking in the vineyards, with more hand picking.” The latter would allow producers to “meet Kabinett and Spatlese styles, then pick our grapes for Spatlese and Auslese wines while making sure we not picking rotted grapes, and only picking the botrytis grapes for the later categories.” And Matthewson prefers cold fermentations, which can take weeks or months. “That would let the ferment just tick away, while preserving the riesling grape qualities.”

Some winemakers are not afraid to cite the prime reason for shifting to a sweeter style: sales. At Fulkerson, owner Sayre Fulkerson offers a wine called Juicy Sweet Riesling, clocking in around 7% residual sugar. He’s blunt about the goal. “We made this wine because most consumers and wine writers prefer sweet wines. I made three or four truly dry rieslings and they are a hard sell. And no one ever writes about them.” Regarding the Juicy Sweet Riesling, Fulkerson says, “It flies out the door.”

While this movement is growing, it’s still in the minority in the region. At Lakewood Vineyards, winemaker Chris Stamp says he’s “moved the needle drier, not sweeter,” adding that his sweetest riesling comes in around 2.75% residual sugar. Most of the region’s newer bottlings range between 4% and 6.5%. “Our Dry Riesling sells on par with the sweeter version,” Stamp says, adding that a new Lakewood Riesling will debut this spring called 3Generations, and will be their driest riesling ever, at 0.2% residual sugar.

The Red Newt series is already establishing itself as a classy, attention-grabbing set of wines. The newest versions, from the 2012 vintage, include the Lahoma Vineyard Riesling and the Sawmill Creek Vineyard North Block Riesling. The Lahoma is 4.5% residual sugar, while the North Block checks in at 5.5% and is checked by a crackling spine of acidity.

Russell began honing his skills at Fox Run, which has also debuted a new series of rieslings known as the Geology Series. They include a richer riesling that Russell championed, alongside Tricia Renshaw. Winemaker Peter Bell is quick to give credit, and says, “They’re quite good.” Anthony Road Wine Company is also making its own version, which quickly earned praise from critics.

This hardly constitutes an exhaustive list, which would likely include offerings from Zugibe, Rooster Hill, and others. Sheldrake Point winemaker Dave Breeden says he’s considering a move into this category, while wondering if such a shift would simply “cannibalize our own sales.”

The question for the region is whether winemakers will continue to show a patient, serious approach with this style. Simply offering it as a sweet riesling to please customers who want sugary drinks is a plan that will keep the style in neutral. Fortunately, Russell and his ilk are determined to push the style to higher levels. “These are beautiful wines, complex wines, and nearly ageless when made well,” Russell says. “But I don’t think we’re quite there yet as a region. The problem is not one of vineyard or winemaking talent. It’s simply that we need more time to explore the style.”