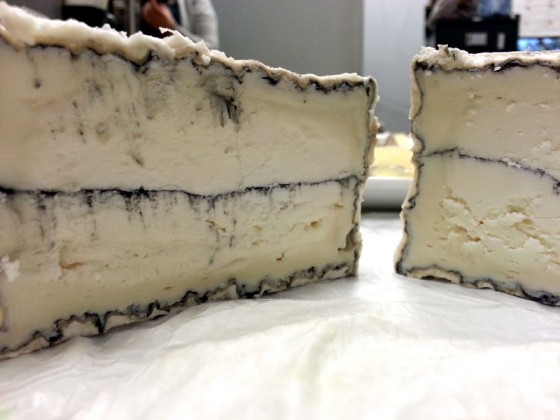 A couple of weekends ago, I had the privilege of conducting a beer and cheese pairing workshop at Empire State Cellars.  This occasion marked a fresh start back in the cheese world as my past year was a chaotic whirlwind of buying a house and becoming a father.  Although I had certainly consumed plenty of cheese during my time off from NYCR and other cheese-related activities, this was my first opportunity in a while to lead a group of people through a guided cheese and beer tasting with New York cheeses and Port Jeff Brewing Company.

After tasting the beers and making my pairing selections, the supplier ran into an inventory issue and made several last-minute changes from the cheeses I selected. While I was initially frustrated at the prospect of leading a pairing class with cheeses I did not select I was definitely excited at the prospect of tasting Blackbert, a new ash-ripened, goat’s milk camembert from R&G Cheesemakers.

Cheesemaker Sean O’Connor named R&G Cheesemakers after his sons Ryan and Gavin when he began to make cheese on his own in Cohoes, NY several years ago. After stints at Old Chatham Sheepherding Company and F. Cappiello’s in Schenectady, he ventured out on his own to explore his own path in the dairy business.

On the surface, Blackbert has a soft, bloomy white rind with some gray, greenish hues on the edges. When cutting into the small wheel, my knife slid easily through the exterior, but met some resistance from the dense past at the center. The rind and the paste were seamless without a hint of paste separation or “Toad Skin.” A fine layer of ash cuts right through the center of the wheel, somewhat reminiscent of Humboldt Fog from California. Vegetable ash is typically used to balance acidity while ripening. Some tasters may detect a certain hint of minerality when sampling, but I find this to vary to the point where it is difficult to track with any amount of certainty.

The nose on this cheese is very clean with maybe a hint of fresh cut grass. Goat cheese is very rarely fragrant, so this is right in line with what to expect. The paste is very smooth and creamy with the taste of sweet cream, and a mild to moderate “goat” taste on the finish depending on the relation of the paste towards the rind.

As part of the tasting seminar, this cheese (by default) was paired with the oatmeal stout. My original selection was a cow’s milk triple cream, and I was not sure how a goat’s milk camembert would pair. It ended up being a great match. The roasted coffee and chocolate undertones of the stout balanced the acidic tang on the finish of the cheese quite nicely. Along those same lines, I would also recommend a rich porter or even a barleywine to pair with this cheese.

Overall I am very impressed with this cheese and highly recommend it.