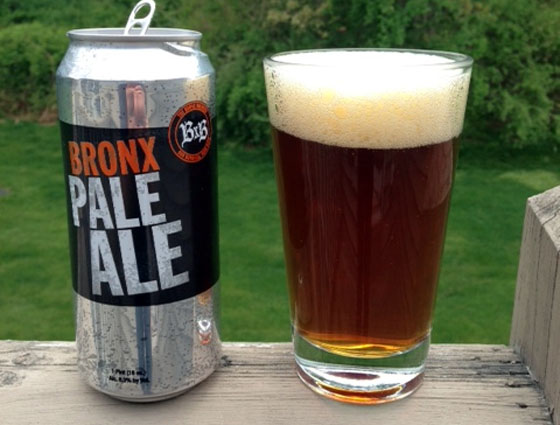 I’m admittedly not a big fan of “summer” beers. Ales and lagers that are part of a summer beer program are usually over-the-top with citrus flavoring and other adjuncts.  The malt profile in these beers, whether it wheat or pale malt, often leave a funky aftertaste.

I’d much rather reach for a Belgian or domestic wheat beer for hot-weather drinking — but, I am always in the market for a crisp sipper that has a clean finish and complements outdoor activities.  As I find beers that fit into the “session beer” category over the warmer months, I’ll review them for your beachside pleasure as part of “The Summer Session.”

The latest ale that strikes me as befitting for a spring/summer afternoon is the Bronx Pale Ale from The Bronx Brewery. This ale gained major points from the get-go due to its packaging. It comes in a four pack of 16oz. cans.  It’s perfect for beaches, BBQs, and those nights when you don’t want to carry a 30 lb. bag of bottles out to the recycling bin. Better yet, its fills a pint glass as opposed to the always-depressing ¾ glass fill.

When I asked Bronx Brewery general manager, Chris Gallant, what gave him the idea to can his beer, he told me “We love cans. They are more beer-friendly (no light gets in, less opportunity for oxidation), environment-friendly (easier to recycle), and brewer-friendly (less costly to make). And lastly, great for the consumer — more convenient and easier, especially in the summer.”

With distribution reaching from New York City to Canada, Gallant hopes to produce up to 2,000 barrels a year in cans alone. This brewing capacity means the beer will be easy to find around stores, which is important if you want to drink it.

The beer pours a nice dark amber color, with a proper frothy head. Centennial and Cascade hops dominate the nose, with some pine resin and a light citrus character showing.  The grain bill is composed of Muntons Maris Otter, Weyermann Caramunich, Briess Vienna, and Victory malts, which combo gives the ale a distinctively “English” flair.  A nutty, biscuit flavor carries the beer to a clean dry finish.  Just a touch of bitterness at the end is telling of the ale’s American roots.  This serious burger-beer is also light enough to drink on its own.  The 6.3% ABV will make those summer family reunions a bit more tolerable, just be careful on your ride-on lawnmower.

As always, we at the NYCR love hearing what our readers are drinking; comment on what fills your pint glass this summer!