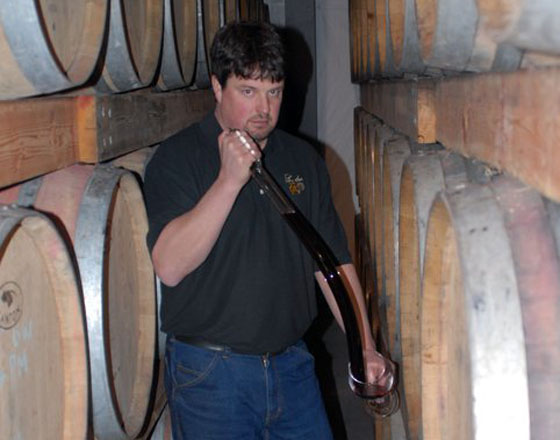 Edward Lovaas, head winemaker at Pindar Vineyards and Duck Walk Vineyards, grew up in Crescent City, CA but moved to Ukiah, CA —  the heart of Mendocino wine country — when he was a sophomore in high school. After high school he spent four years in the United States Marine Corps before returning Ukiah where he got into the wine business almost by accident.

Over the years, he worked for a handful of wineries, but he learned the most at Graziano Family of Wines studying under Greg Graziano where he got to work with “almost every  variety  you could thing of” and also worked with the U.C. Davis Extension Program by making there small-lot test wines. He is also a graduate of U.C. Davis distant learning program in Viticulture and Enology.

In 2008, Edward took a year off to focus in this other passion and work as a scuba diving Instructor and also worked with popular TV programs like Myth Busters.

Edward moved from California to Long Island, NY  just in time for the 2010 harvest. I guess you could say that he’s lucky for that.

What was the first bottle of wine you remember drinking — and where did you have it and who were you with?
First bottle I remember was a 1977 Chateau Lafite and I drank it at a party in high school (1992).  A girl whose family was big in the wine world brought three bottles of it to a party on the river. I had only had cheaper wines other than a taste with my parents and this wine was smooth, balanced and went well with the grilled steaks.

It was much different then the sweet swill that normally showed up at parties.

When did you know that you wanted to be in the wine industry?
I decided to go into the wine industry while helping a friend, who was an assistant winemaker, get stuff done so he could get finished up early that week so we could go to a motorcycle race. I decided it was a better long-term job than being a police officer which I was in the Marine Corps. My family were big wine drinkers and I always liked wine with food and enjoyed the science and art of it.

What do you wish were different about the New York wine community and industry?
I would like to see less Merlot and Chardonnay on Long Island — well in the world in general. Also more winemakers for all the wineries to show more diverse styles. I feel there are a lot of wines but all made by the same people, which creates a style profile rather than a region profile of the wines that could be produced on Long Island.

When you’re not drinking your own wines, what are you drinking?
I am a huge IPA fan so Ballast Point Sculpin or Pliny the Elder. As far as wine goes Northern Italy and Southern France wines or the Cali version of them. I am not a sit-on-the-couch-with-wine guy. I prefer my wine with food and I feel that the wines of Northern Italy and Southern France pair much better with the style of food I like. That being said I love a good pinot noir.

If you could only pick one grape/wine/producer to live out your days with on a deserted island, what would it be?
Chateau Rayas (100% Grenache). Grenache is by far my favorite wine to make and to drink and Chateau Rayas is Grenache at its best in a good vintage. It also pairs wonderfully with grilled rack of lamb.