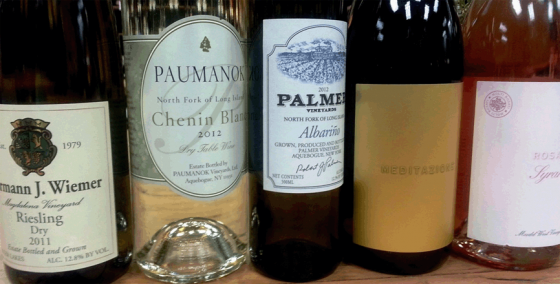 Recently at a wine dinner in Manhattan featuring Oregon’s Bergström Wines, general manager, vineyard manager and winemaker Josh Bergström expressed significant interest in New York wines, but due to limited distribution in Oregon, he has only had a few samples when he has visited New York City. As I always take advantage of such opportunities to share New York wines, I told him that I would provide him with some great examples, and in return he and his staff will do tastings of the wines and provide their tasting notes to compare with New York winemaker notes and wine reviews.

Josh also asked that in selecting the wines to include some that reflect what make New York wines unique and sets them apart for other cool-climate wine region wines.

What wines would you select for Oregon winemakers to taste that are interesting, uniquely New York, and that are made from grape varieties that are not present or not popular in Oregon where pinot noir, pinot gris and chardonnay are the primary grapes planted?

Here is my list of New York wines from the various wine regions, various types and styles. I have selected currently available wines that I have tasted, and in my opinion these wines not only stand up to comparable wines from other cool-climate regions, they also truly represent New York (although there are many fine New York chardonnay and pinot noir wines I have not included them as Bergström produces these varietal wines).

Finger Lakes Riesling. Without question Finger Lakes rieslings totally reflect New York and at the same time are equal to some of the rieslings from Germany and many are equal to or better than rieslings from Alsace, Austria, Northeast Italy and any domestic riesling including the quality rieslings from the Pacific Northwest. In the Finger Lakes the quality of the fruit, the climate, the terroir and the elevated winemaking techniques used by a dozen of the top producers are indeed world class.  Difficult choice between Anthony Road, Herman J Wiemer, Dr. Konstantin Frank, Ravines, Tierce, etc. to select one, but the one chosen is the Herman J.  Wiemer 2011 Magdalena Vineyard Dry Riesling made by winemaker Fred Merwarth.

Long Island Merlot or Merlot Based Bordeaux Blend. While currently not as popular as it was, a great vintage Long Island merlot wine produced by a top winemaker is superior to virtually any single varietal merlot wine or Bordeaux-style blend produced in any true cool-climate wine region outside Bordeaux. Another difficult choice between Bedell Cellars, Lenz, Macari, Paumanok, Sherwood House, Wölffer Estate, and many others, but the selection is the The Grapes of Roth 2007  Merlot made by winemaker Roman Roth.

New York Cabernet Franc. Both the Finger Lakes and Long Island wine regions are producing excellent cabernet franc wines. They are perhaps not quite equal to the great cab franc wines of the Loire Valley, but these wines are unique in the United States. The Finger Lakes wines are more structured but perhaps lighter than the French wines, while they have nice fruit aromas and flavors. The Long Island wines have the same green veggie aromas and flavors as do the Chinon wines from the Loire Valley, and although they somewhat lack the structure found in the French counterparts they are very close in most elements. Although a sommelier from Oregon that I know has praised the cab francs from the North Fork, both regions produce great wines. Choices are the Bedell Cellars 2011 Cabernet Franc from winemaker Richard Olsen-Harbich and the Red Newt Cellars 2010 Cabernet Franc from winemaker David Whiting.

Long Island Rosé Wines. Perhaps the wines from Long Island that have the broadest appeal are the Long Island rosé wines. While the climate is nothing like the warm to hot climates of the South of France (Southern Rhone or in Provence), the combination of the wonderful Long Island red grape fruit and the maritime climate produces some of the great rosé wines produced in North America, and far better than most any other cool climate region (although some Oregon pinot noir rosé wines are quickly catching up to Long Island). There are so many great Long Island rosé wines; Bedell, Channing Daughters, Croteaux Vineyards, Sherwood House, Shinn, Wölffer, etc. A difficult choice but the Channing Daughters 2012 Syrah Rosato made by winemaker Christopher Tracy is picked.

Hudson River Valley Hybrid Wines. New York — until 40-50 years ago — had primarily been known for hybrid wines, made from French and other European hybrids developed during the phylloxera epidemic in the 1800s. Most of New York wine regions that grew hybrid grapes have converted to vinifera grapes, but the Hudson River Valley has continued to produce quality hybrid variety wines. Most interesting in my opinion are the signature Baco Noir wines produced by a handful of wineries. Baco Noir is a French-American hybrid grape that was bred in 1902 and commercially released in 1910. While the grape is grown and wine is made in Ontario, Southern Oregon’s Umpqua Valley, and the Finger Lakes, the Hudson Valley Baco Noir wines are the most unique and very interesting.  A Baco Noir from Benmarl, Hudson-Chatham or Warwick Valley will be a quality wine.  The selection is the Hudson-Chatham 2010 Baco Noir Reserve Casscles Vineyards.

Niagara Escarpment Red Wines. New York’s Niagara Escarpment is one of the least known wine regions in New York, in part because the Canadian Ontario Niagara Escarpment Wine region is better known. The unique micro-climate of the Niagara Escarpment permits vineyards to successfully produce vinifera grapes (including cabernet sauvignon, chardonnay, pinot noir, riesling and syrah) resulting in a world-class grape-growing region. While the white wines have interesting cool-climate aromatics, it is the red wines that make this an interesting and unique wine region. Arrowhead Spring, Leonard Oakes and Freedom Run Winery all produce great red wines. The pick is Arrowhead Spring Vineyards  2010 Syrah made by winemaker Duncan Ross, which is not only the highest-rated New York State syrah wine, it may be one of the top cool-climate syrah wines produced in North America.

New York State White Wines. While New York riesling wines are the most renown white wines and definitely world class, New York is also producing white wines that while perhaps not quite equal or superior to the best of the cool-climate wines of the same varieties they are still very interesting.  Top examples are Long Island albarino and pinot blanc wines from Palmer, chenin blanc from Paumanok.  friulano from Channing Daughters, sauvignon blanc wines from Macari and Shinn, and sparkling whites from Sparkling Pointe. From the Finger Lakes the gewürztraminer wines from Anthony Road, Dr. Konstantin Frank, Hazlitt 1852, Red Newt, Standing Stone and Wagner are all interesting and quality wines. The selections are the amazing Palmer Vineyards 2012 Albarino from winemaker Miguel Martin and winemaker Kareem Massoud’s world class Paumanok Vineyards 2012 Chenin Blanc.

New York Blends. While varietal wines tend to receive the primary interest from professional reviewers and wine buyers, a number of red and white wine blends made in New York have what it takes to make them unique and interesting wines. Winemaker Christopher Tracy at Channing Daughters makes edgy blends including Envelope (White), Mediazione (White) and Sylvanus (White), and Macari’s winemaker Kelly Urbanik produces the Dos Aquas (Red) that has complex flavors. The choices are the exotic Channing Daughter 2009 Mediazione (White)and the amazing Paumanok 2010  Assemblage (Red).

There are other undoubtedly other unique, interesting and outstanding New York wines and after I get to taste them, they will be included on the next list.