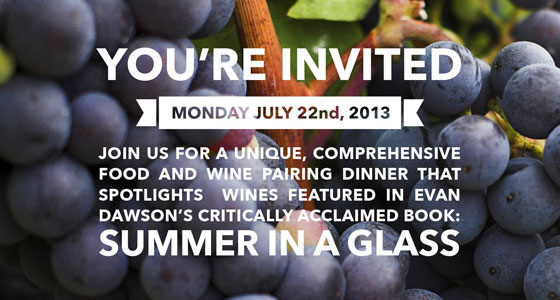 When Summer in a Glass was published, I wondered if there could ever be a dinner event that brought together all the wines from the book. It seemed like a wonderful idea, but I figured it would remain only an idea. The work of pulling together such an event would be overbearing.

On Monday, July 22, the Hole in the Wall Restaurant in Perry is hosting the Summer in a Glass-themed dinner. Tickets are still available for $150 apiece. If that price seems high, consider this: the restaurant is still probably going to lose money on the event.

This is not about making money. For owners Travis Barlow and Jacquie Billings Barlow, this is about a once-in-a-lifetime experience.

“When I read the book, I would get to the end of each chapter and I would think, ‘I have to try this wine!’ And then the list just grew, and I realized it had to be a dinner event,” Jacquie says.

Fortunately for us, Jacquie’s husband is a gifted chef who prizes locally sourced food. He’s creative, daring, and he loves pairing food and wine. 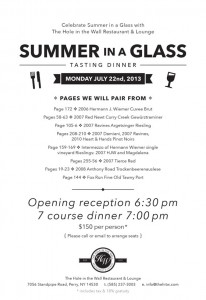 But getting the wine wasn’t easy. Jacquie wanted the exact vintages described in the book. By now, that means some older wines, and some of them hardly exist anymore.

So this innovative couple made the drive, winery to winery, politely making their case for wineries to sell them some of the last existing bottles. Hermann J. Wiemer is parting with their 2007 Magdalena and HJW Dry Rieslings, even though there are very few bottles in their inventory. Scott Osborn, owner of Fox Run Vineyards, decided to round up what he could find of the 2007 Tierce Red, the wine described in the book’s final chapter.

And the author — that would be me — has decided to dip into his personal cellar to fill in some of the holes. 2007 Heart & Hands Barrel Reserve Pinot Noir: check. Ravines 2008 Argetsinger Vineyard Riesling: check. Red Newt 2007 Curry Creek Gewurztraminer: check.

Even the Anthony Road 2008 Riesling TBA, retailing for $100 a bottle, is on the menu. And while it might not appear on the published lists, I have a feeling that dinner guests will get a taste of the famed 2008 Anthony Road Semi-Dry Riesling, the wine that won New York’s Governor’s Cup.

The full menu is below. I hope you can join us. So often we hear events described as “one time only!” This time, that’s undeniably true.

featured, hole in the wall, summer in a glass