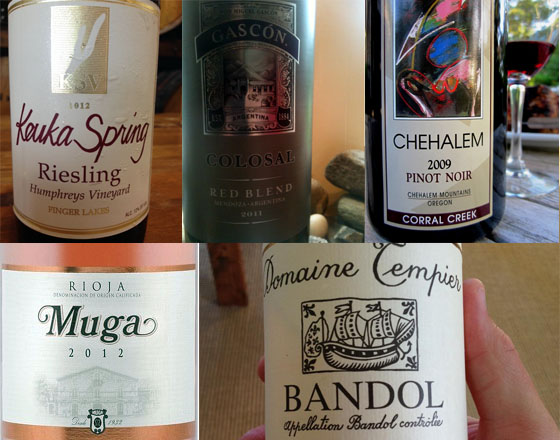 Lenn Thompson: Domaine Tempier 2012 Rose
Over the past couple of weeks, I’ve been drinking as much rose from as many regions as possible — partly because I love the versatility of rose during the summer months, and partly because I want to have a bit more context leading up to the 2012 rose tasting and report I’ll be undertaking very soon.

On Sunday, I got to enjoy this rose that frankly I’d probably not pay for at around $40. It was a surprise offered by friends from the Finger Lakes who are vacationing on the East End this week.

After tasting it, it’s certainly easy to understand why people would and do spend that kind of money for it. Bright and balanced — it’s velvety and rich, but the acidity is so well integrated, the mouthfeel is one of the real stars — with layers of crunch red fruit, peach and citrus. As it warmed in my glass, a subtle herbal/spice note emerged.

Best rose I’ve ever tasted? Maybe. Best rose-drinking experience I’ve had? Absolutely. Good friends, good food and good times will elevate any wine. With a wine this good, they make for a real wine memory.

Evan Dawson: Keuka Spring Vineyards 2012 Humphreys Vineyard Riesling
Here’s another Finger Lakes winery that is now offering a single-vineyard riesling. That’s not inherently positive or negative; some of the great wines of the region are single-vineyard wines. And some of these wines are built on marketing pablum.

So how about this one? August Deimel is one of the most thoughtful winemakers on the subject of single-vineyard wines. In short: He wants to make balanced wines, and single-vineyard wines need to be evaluated to make sure they don’t veer toward one characteristic or another. “A single vineyard often gives you a very important tool in a blend,” Deimel told me on a recent visit.

So why offer this one? You’ll have to check out our upcoming story on Keuka Spring’s new winemaker. He is, to say the least, a good read. And well read.

Todd Trzaskos: Miguel Gacscon “Colosal” 2011
It was a kind of synchronicity when on the way home, selecting some t-bones for the grill to wrap up the Indie Forth weekend, I thought, ‘We are low on malbec’. I turned the corner from the butcher’s into wine at the Hannaford’s in Middlebury. Sorry to rub it in to those places where there is no wine at the grocery. There is the expected selection of big brand wines, and a decent one at that, but there is also a center island block two-cases wide, four-cases high and six-cases long, filled with a more conscious selection which has on many occasions offered bargains and delights.

This time there was the completion of a trifecta. I’ve previously had and stocked the basic and reserve Gascon Malbecs, but had not yet tasted the blend in front of me. malbec, bonarda, syrah, cabernet sauvignon.

The base malbec from this old house is straightforward and pleasing and still very reliable while showing some vintage variation. The reserve malbec is sprinkled with some other fruit and goes through a longer oaking program. Whole judicious and structurally sound, the reserve experience really improves with some wait time.

The Colosal fills the drinkability/age worthy gap with a just balance of bright red berry fruit shining through a dark plum skin curtain that drapes across the tongue. finishes with very clean and subtle length which I think will continue to flesh out with time for the patient. At the same price as the basic Malbec a more complex deal. It is just this kind of wine that can take Argentine reputations beyond the one grape.

Len Dest: Chehalem 2009 Corral Creek Vineyards Pinot Noir
To celebrate Independence Day this past week and weekend, the choices in wines were American.

While not fully recognized by many wine reviewers that continue to maintain their judgments primarily based upon the Parker points criteria, among the American varietal wines judged by most other criteria used by the wine industry, as well as the opinion of sommeliers and wine directors, American pinot noir (having already passed merlot and zinfandel in demand) is rapidly on the path to catch up to cabernet sauvignon to eventually become the choice as a red wine. The growth of pinot noir in large part is due to the fact that American pinot noir wines are more food friendly, as are their European cousins, and also very drinkable on their own. With increased pinot noir demand, vineyards throughout the cool-climate regions of North America are planting pinot noir vines, and unfortunately far too many vineyards in ill suited warm and hot wine regions are also being planted with pinot noir.

And while a number of the newer cool-climate wine regions are producing good to very good pinot noir, including in New York, great and exceptional American pinot noir are currently coming from three cool-climate wine regions; 1) Central Coast of California, in particular in the Sta. Rita Hills and the area around Lompoc, 2) Coastal Northern California including the Western Russian River Valley, Sonoma Coast and Anderson Valley on the Sonoma and Mendocino border, 3) and the mothership – the Willamette Valley of Oregon. All three regions produce excellent pinot noir wines, but only Oregon produces very good to exceptional wines in virtually all vintages and across the entire range from regional blends to single vineyard/single block wines.

The 2009 vintage may be one of the best in the past twenty years in the Willamette Valley, with nice balance, very good quality fruit, ripeness and acidity. The Chehalem Mountains AVA created in 2001 is located in Northwestern Oregon, is entirely contained within the Willamette Valley AVA and includes Ribbon Ridge, Parrett Mountain, and Bald Peak wine regions. As a wine producer Chehalem is a partnership, with one of the partner, Bill Stoller, owning his own outstanding winery and the other partner Harry Peterson-Nedry starting vineyards in Ribbon Ridge in 1980. Corral Creek Vineyards is adjacent to the winery and has been an Estate Vineyard since 1990.

This is an elegant pinot noir with a ruby black opaque color and bright red edge on the rim. The aromas are of black raspberry, dried herbs, spices, with certain earthiness. . The flavor is of ripe black cherries, with slight black pepper notes. This is not a heavy wine, but rather light with a great long finish of complex herbs and spices, which makes this wine standout. The wine is very drinkable now but will likely mature and be best in 3-5 years. The wine is perfect with most meat and poultry dishes, as well a grilled vegetables, and cheeses.

Sold out at the winery, it has limited availability at various online wine shops.

Kevin Welch: Bodegas Muga 2012 Rosado
Last week finally began to actually feel like summer between a short road trip vacation through New England and the subsequent holiday.  My wife and I visited friends in our old town in Connecticut and was sure to stop in a few of our old favorite restaurants only to find one had some great new wine additions including a 2011 Ravines Dry Riesling.  This certainly set the bar for the rest of the week.

A trend soon emerged with our next few wine choices however; a 2012 Falesco Vitiano Rose, a Hermann J. Wiemer Rose Cuvee and a 2012 Bodegas Muga Rosado, the last of which stood out among the rest.  The Muga Rosado was predominately Garnacha and began with a pleasant mix of peaches, pears, strawberries and apples.  The Rosado was fresh and clean and offered just enough acidity to add some structure, and proved a perfect wine for a hot summer evening and a great value too.