But are you taking a Hegelian approach? First, imagine the pleasure of wine in its truest, most savage form: drinking it. One person, drinking one bottle. Then, restrain that savageness, and invite a group to enjoy the wine together. Yes, you’re sublimating the instinct to drink it all yourself, but in so doing, you arrive at the third, perhaps higher, plane: You enjoy wine with others, and it leads to conversation and greater pleasure, and enlightenment.

Wait, who talks like this? What the hell is going on here? Hegelian models and the sublimation of the savage and the search for a higher understanding? Are we losing our minds?

No, we’re just spending too much time with August Deimel, the new winemaker at Keuka Spring Vineyards on Keuka Lake.

“I can’t always contain it,” Deimel says, smiling, regarding his Hegelianism. I think that was it. Maybe by then we had moved on to Kierkegaardian topics.

This is who August is, and it’s fascinating. There is not an ounce of pretension, nor condescension. He is not a poseur. Deimel, 31, is a winemaker who studied to become… he’s not exactly sure what, exactly, but it was his education that led him to the Finger Lakes, and to winemaking.

The education of a Johnnie
Deimel is a graduate of St. John’s College, a small school with campuses in Maryland and New Mexico. Improbably, this school that boasts no outright majors (students are encouraged to broaden their minds in discussion-centric classrooms, not classes that focus on exams) has produced some of the American wine scene’s meteoric risers. Abe Schoener of the Scholium Project in California is a graduate; his winery is often the hub for references to Aeschylus, or Plato. Warren Winiarski of Stag’s Leap fame delivered the keynote address several years ago.

During a tasting at Keuka Spring, Deimel explains that the Johnnie educational approach doesn’t favor any one industry, although it seems to point students to winemaking.

This kind of openness to experience can be particularly valuable in the Finger Lakes, where the wild variations in vintage conditions can test a winemaking staff.

“I love it here,” Deimel, a Pittsburgh native, says. “To say it’s an exciting place at an exciting time would not be hyperbole.”

Path to the Finger Lakes
Deimel got his first extended taste of wine on the retail side, working in a wine shop. After considering career opportunities in theater and politics, he got serious about wine, obtaining a Masters from Cornell. The first break came at Adams County Winery in Pennsylvania, where Deimel was quickly given control of the operation.

“That’s a great way to learn a lot in a short amount of time,” he says, laughing. “I wouldn’t trade it. Good people, and there were lessons everywhere.”

The job at Keuka Spring opened when winemaker Mark Wiltberger left in the early part of 2012. The Wiltberger family owns and runs the operation, with Len and Judy watching their children assume more responsibility. Mark’s departure was a bit of a surprise to his colleagues, but the Wiltberger family says Mark left to pursue more wine education around the world. Today, Mark is listed as a consulting winemaker. “He’s doing very well,” says Jeanne Wiltberger, Mark’s sister and the winery’s director of promotion.

Deimel’s colleagues across the Finger Lakes have praised his early work. “We feel fortunate to have August on board,” Jeanne says. “There are times when he says something, and everyone stops and says, ‘What was that?’ He thinks on a different level.” 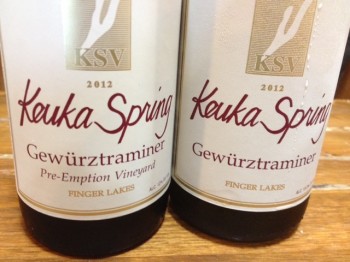 “One thing we need to be conscious of in our enthusiasm for single-vineyard bottlings is the need for balance,” he says. “Each vineyard provides something different, and if you always isolate, you make balance more difficult to achieve.”

In other words, Deimel enjoys having each vineyard serve as a blending tool. He wants every finished wine to be balanced and delicious. What happens if the new wines don’t achieve that?

“The responsible thing to do as a winemaker is to be willing to make the call that, say, this year it’s better in a blend,” he says. “So we’re going to follow things. We’re not going to produce single-vineyard wines just for the sake of doing it.”

The 2012 Humphreys Vineyard Riesling is a cutting wine, more sweet than most dry bottlings, and drier than most semi-dry bottlings. At $22, the Wiltbergers expect it to sell rather easily. Deimel confesses a preference to lay down the Humphreys for a few years to let it unwind.

The 2012 Pre-Emption Vineyard Gewurztraminer is a single-vineyard bottling that Deimel decided to separate from their other sources of the same variety. “It hated the other fruit,” he says. “It just would not blend effectively. So it just made sense to keep it separate.”

There are clear differences that mark each of Keuka Spring’s Gewurztraminers. Juicy but not sweet, both wines are vividly aromatic and attractive. Deimel has gravitated toward this variety, knowing it can be a tough sell for consumers. It’s also very easily off balance, another of Deimel’s obsessions.

Customers who meet Deimel will find a jocular, easy-going winemaker, but not one who believes in the “dumbing down” of wine. “You make wine accessible by explaining it,” he says. “Taking out the jargon and the detail is the exact wrong approach. It’s a mistake to underestimate customers.”

I ask him if a strong customer base, combined with a burgeoning industry, aided by an open-minded winemaker… well, where could it lead? “There’s sort of a Hegelian thing happening,” he says.

I shake my head, indicating I want him to elborate. “You know,” he says, “phenomenology of spirit.”

I’m taking his word for it. So are the Wiltbergers at Keuka Spring. So far, it appears to be a wise decision.