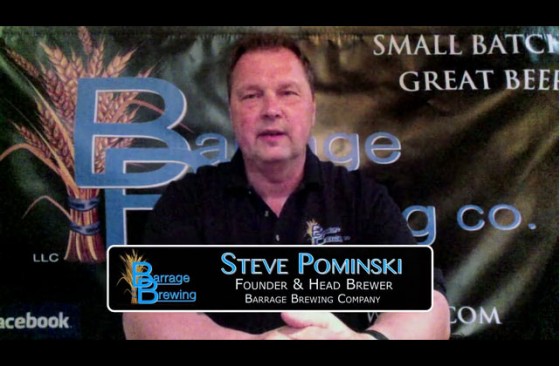 Barrage Brewing Co., one of Long Island’s newest nanobreweries is trying to get its doors in East Farmingdale open after well over a year of trials and tribulations (mostly with regulations) at a couple different locations:

In 2011, Steve tried to open Barrage Brewing Company in Freeport, NY, but was unsuccessful due to building zoning issues. For approximately one year, Steve searched for the right location to open the Brewery, and in March of 2012, he seemed to find the perfect facility in East Farmingdale, NY. He signed a lease and began work on the brewery with a 1 barrel brewing system set up, chillers and fermenting room, along with installation of 15 feet of floor drains. Everything seemed to be going fine, and then hurricane Sandy hit the New York area. The gas line hookup to the Brewery, which was scheduled for November 2012 was delayed until April of 2013. In that time, we obtained all licenses from the federal government and New York State Liquor Authority. Just when everything seeming to be coming together for the Brewery to open, an unexpected road block happened. The Suffolk County Sewer District informed us that our sewer hookup was not up to code and would need to be upgraded before the Brewery would be allowed to open. We have received quotes from several plumbing companies and are in the process of getting the sewer line up to code.

Steve Pominski, founder and head brewer, has turned to Kickstarter to make it happen. Watch his video and help him if you can.