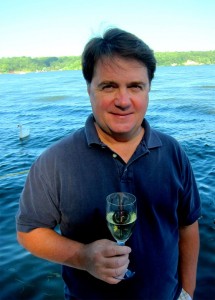 Today the New York Cork Report welcomes Lindsay Prichard to the staff as a Finger Lakes Correspondent. You may remember the guest post that Lindsay wrote for us not long ago.

Lindsay is a transplanted “Buckeye” who grew up in the farmlands of northwestern Ohio before moving to Upstate New York after college. Although wineries can be found in many parts of Ohio today, in the 1970s and 1980s there were few opportunities to experience anything other than lower-quality wines that came from California or were imported from Europe. Gallo, Blue Nun and Mateus were popular names among the wines of the day.

But as fortune would have it, it wasn’t long after Lindsay moved to New York that friends invited him to join them for a winery tour at the now-defunct Barry Wine Company in Conesus, NY. That tour was his first introduction to the world of Finger Lakes wine, a subject that he has been passionate about ever since.

Lindsay covers the Finger Lakes region for the New York Cork Report and is particularly interested in the history of the area as well as stories about the people who work hard at putting the area on the winemaking map.

In addition to pursuing his passion for wine, Lindsay also enjoys travel, photography and scuba diving with his wife Michelle and children Tyler and Tory.

Please join me in welcoming Lindsay to the team.