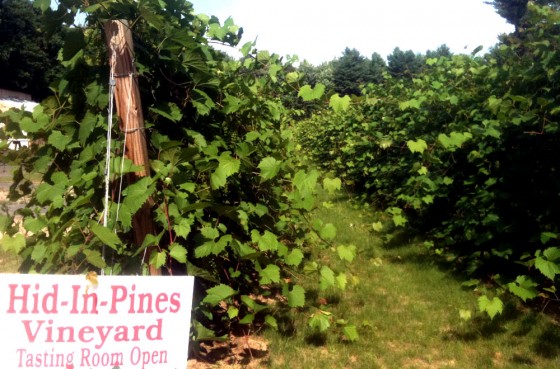 Reports of veraison are finally beginning to arrive from the North Country, and after such wet weather, both the sunshine and this growth stage are welcome news.  It’s not just the grapes that are growing in upstate New York though — so are the wine trails.

Recent legislation makes the Adirondack Coast Wine Trail an official part of the New York State Highway map. It’s just a little trail across sixty-six miles of road, linking seven wineries and cider houses, but it is a major development milestone for a new region that adds to the diversity of wine growing in the Empire State. They will be celebrating the opening of the new trail with a Summer Trail Tour next weekend, August 10-11th.

We have this new ADK wine trail in the far North Country, and we’ve just gained an Upper Hudson Valley Wine Trail which connects ten tasting rooms between Saratoga Springs and Lake George. Also included in recent legislation is the extension of both the Niagara Wine Trail up on Lake Ontario and the Shawanagunk Wine Trail in the mid-Hudson Valley.  Governor Cuomo counted wine trails among the state’s top destinations, when he called a first ever Tourism Summit back in early May, in recognition that the tourism industry is New York’s fifth largest employer, and a “critical economic engine” for the state.

We can expect to see continued growth for the wine trails in this kind of supportive environment. On that note, I’ve not been able to surface a good, concise resource that maps all of the New York State Wine Trails in one place, and may need to see if I can find a comprehensive New York Wine resource that might be interested in hosting such a thing…hmm.

What does it mean to be an officially regarded by the state as a wine trail?  It means that the local association members, get the privilege of ponying up several thousands of dollars in order to have directional signage installed along the route. The state does not chip in at all, but because they are official markers, the highway crews will leave them undisturbed, and might even weed whack around them from time to time. In this case, the group looking to foot the bill is The Adirondack Coast Wine Association formerly known as the Lake Champlain Wines Association. They have gone through an organizational transition along with a branding change, in order to align with the ADK Coast marketing work being done by the North Country Chamber of Commerce. This evolution in the marketing of North Country wine is allowing them to attract more attention, and leverage external resources more effectively. This means benefits like inclusion in the set of video spots that are being produced in order to highlight the ADK Coast in general, an area which the Chamber sees as a regional and international resource.

This Chamber’s broad thinking is certainly appropriate, given the proximity to Canada, and they are not alone in recognizing the potential for larger associations. As it happens, something just came across my desk a couple of days ago, and I got confirmation that I will be able to attend an early informational meeting of the Champlain Valley Wine Trail initiated by the Lake Champlain Basin Program and the Champlain Valley National Heritage Partnership. This is pretty exciting because for a long time, I’ve felt that there is an obvious natural connection within the lake valley…state and international borders be damned. This ambitious project seeks to link the new Adirondack Coast Wine Trail with the La Route-des-Vins in Quebec, and the Vermont producers which lie within the sizable watershed. This is not just a grand idea, as I learned that they have “National Park Service funds to develop a wine and cider trail that promotes cross-border collaboration and sustainable agritourism.”

Given that our new little wine trail is already part of the United States first international wine trail, I’m sorry to say that I’m not going to be able to make the Adirondack weekend tour this year, because of a long held schedule conflict.  So, I’m hoping that maybe some of you out there, will be on the Adirondack Coast Wine Trail, and give us a report from the field.  While I put together this post, I figured I ought to tune-in to the trail as best I could, and so I opened one of the Hid-In-Pines Leon Millot that I’ve had waiting patiently in the “to taste” rack.

Hid-In-Pines does not do vintage labeling, which keeps things simple, and leaves some flexibility for inter-blending, but in practice, the wines are generally bottled year to year. I’m pretty sure this one is a 2011 based on the dust layer on the bottle. The lean nose seems to support the dating, with tight wafts of rose petal, black raspberry, and nutty smoky vanilla.  That last note is an important point, because these wines are bin fermented and glass aged…no oak influence at all. Leon Millot tends to have ripe seeds, in my experience, and with maceration lend a pretty wood note that oak regimes would love to convey.  Once it hits the tongue, it has to be 2011.  The soft texture lulls and the vivid acidity lashes. Not so much steel-fist-in-silk-glove, as bramble fruit jam spread on electric eel. ( I like eel a lot, BTW ). Gotta say, I like wines with freshness.  This wine presents like a really high and tight Zweigelt. I know the others I have are from 2012, and will be much riper. I am kind of sorry I did not think to keep this one down for a while longer.

Even with just a handful of wineries on each North Country wine trail, there are dozens of wines and ciders to check out. If you find something you like, I’d recommend you stock up on it.  For most of these wineries and cider houses, production is small, and so they do sell out.  The beverages from this past vintage may disappear, but a lot of folks seem to think that these new wine regions are here to stay.