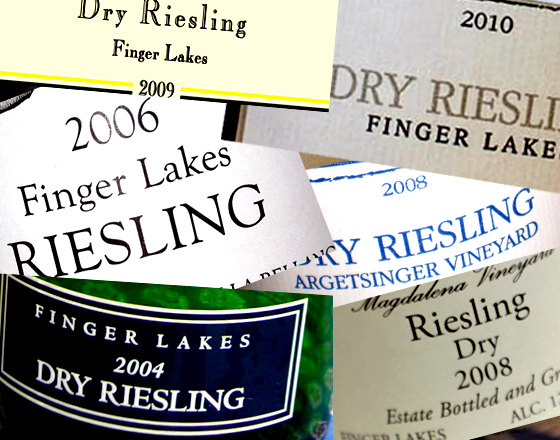 The industrial wine machine loves an exalted vintage. For consumers, it’s a chance to create a kind of trophy bottle or trophy case. For wineries, it can be a chance to raise prices (though this rarely happens in the Finger Lakes). But in upstate New York, there simply isn’t a consensus about the best vintage for riesling of the past decade.

And it’s fascinating to read the comments of the region’s top winemakers. Because there are some deep divides.

The New York Cork Report surveyed a wide range of Finger Lakes winemakers and winery owners to get their take on the strongest riesling vintages. If there is one easy commonality, it’s that no one prefers for 2007. And for good reason; the drought-stricken vintage caused enough stress to see rieslings age somewhat prematurely. It’s not a long-term aging vintage for riesling.

Outside of that, there are a number of choices for the preferred riesling vintage. If our readers are curious, the vintage that I’ve purchased the most of — and the vintage that I own the most of — is 2008. The flavors are ripe and profound, and the best winemakers had two options with the botrytis: they incorporated it seamlessly, or they sorted it completely.

This question first entered my mind when I was talking to Johannes Reinhardt, who also loved 2008, but points to 2010 as a potential benchmark. Some winemakers responded via email and did not specifically choose a top vintage. Here are some of their comments.

2006
Peter Bell, Fox Run Vineyards: “For me, 2006 has to be the very best of quite a few good years. There was a vibrancy to the wines, which I describe as a combination of flavor intensity, flavor purity, perfect acid and modest alcohol. Whether they were made in a dry or semi-dry style, they all carried those attributes. And they are still strikingly delicious, after all that bottle age.

Dave Whiting, Red Newt Cellars: “THE classic Riesling vintage of the Finger Lakes. Crisp, vibrant, aging beautifully. Every 2006 that I have tasted in the past year has been absolutely gorgeous.”

2012
Chris Stamp, Lakewood Vineyards: “I think the best Dry Riesling we’ve ever made is on the shelf right now: 2012. This vintage probably came into balance for the dry Riesling better than any other I’ve worked with. The acid was slightly lower because of the long growing season last year and the sugars were at the perfect level to give decent alcohol (11.7%) and leave just the right amount of RS to give it the ideal balance.”

Fred Frank, Dr. Konstantin Frank Vinifera Wine Cellars: “My choice for best Riesling vintage in the Finger Lakes in the past decade would be 2012. This is because the Dr. Frank Rieslings from 2012 have won so many gold medals and higher awards in national and international wine competitions.”

2009
Morten Hallgren, Ravines Wine Cellars: “I prefer the cooler vintages. Working with the acidic backbone allows for great aromatic focus, favors the expression of the mineral character in Riesling. In certain vintages, the wines take years to develop ( 06, 09
Argetsinger). In other years, the aromas are more present earlier( 11,10). Warmer vintages seem to show well early on, but peak relatively early, like the 07’s probably peaking now.”

Aaron Roisen, Hosmer Winery: “My favorite vintage at Hosmer was 2009. The rieslings had a level and twist of acidity that allowed for the dry riesling to be a bit over 1% residual sugar but still feeling dry on the finish, which led to a depth to the mouthfeel that was uncommon and curious.”

2010
Kim Engle, Bloomer Creek Vineyard: “In 2010 we harvested very ripe Riesling and I was able to make a very different style of wine- one inspired by contemporary German producers, high in alcohol and very complex. We have tended, as an industry, to harvest very high acid Riesling grapes and to shy away from phenolics in our wines. I think that the 2010 Rieslings show balance and support the potential of using riper grapes.”

2003
Bob Madill, Sheldrake Point and Red Newt Cellars: “2003 was a seminal vintage for Sheldrake Point Winery. The cool vintage gave rise to Riesling of compelling expression with wildly racy acidity. We set aside 100 cases of one special tank from the top of our R2 block (highest and farthest from the lake) for a Reserve wine thinking that maybe we were nuts. After a year or so in bottle we released the 2003 Reserve Riesling and still have a few bottles in our library. 2003 taught us to embrace the lean, linear and racy nature of our dry Rieslings.”

2011
This vintage was listed often as a second choice. A massive challenge, 2011 has nonetheless paid off for those who did the additional work necessary to harvest clean, ripe fruit.