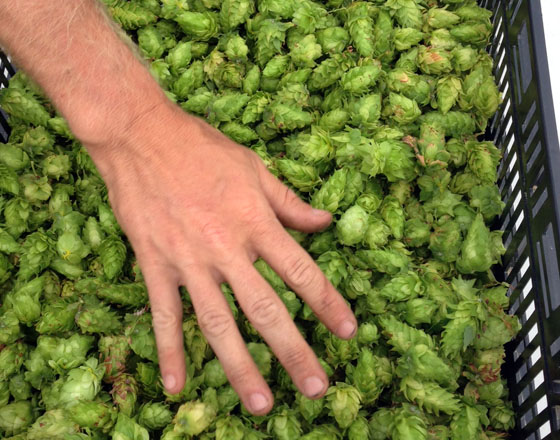 Originally, this post was going to be about locally grown hops, and what Long Island breweries were doing with them. But after talking with a handful of people in the industry — mainly brewers and hop farmers — I was left with more questions than answers. The craft beer industry is growing at a rapid rate, that’s no secret, but can New York farmers keep up with the demand for local ingredients?

You may wonder why it matters. If you are a microbrewery it might not at all. Hops and grain will always be available from sources around the world, sources that are consistent, cost-efficient, and allow breweries to function and brew year-round. The importance of ingredients being grown in our state comes into play as more New York based breweries apply for Farm Brewery licenses.

Farm Brewery licenses just started being issued this year. Hundreds of applications are pending and some have already been granted. This licensing is similar to the license a farm winery receives when they grow the majority of fruit used in their wine production. The benefits are numerous — lower license fees, the ability to sell your beer almost anywhere (festivals, farmer’s markets etc.), and selling pints to drink on premises are a few major points that drive breweries to apply for this license. But have you ever tasted a brewery’s offerings while gazing out at their acreage of two-row barley and centennial hops? Probably not. In fact, if you’re in New York, almost never.

So how is this allowed? Well, the state liquor authority works in mysterious ways. The law plainly states that to be considered a farm brewery, the producer must brew using 20% New York-grown hops, and 20% of all other ingredients by weight grown in the state (not including water). This is just for the first 7 years. After that grace period, the percentage rises to 60% and finally 90% after 13 years of existing as a farm brewery. If you’re a real stickler for the law and wish to read it, here is the bill. Keep in mind that these percentages of ingredients refer to each beer brewed,  not a brewery’s annual production. So even if one batch is brewed following the New York hop harvest, and is comprised of 100% New York-grown ingredients, this will not help in the dead of winter when these farms aren’t able to provide them. 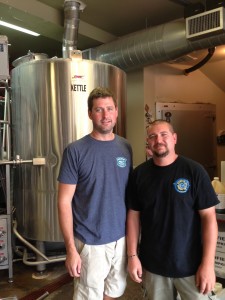 It may seem like I have a bleak outlook on the future of this bill and licensing in general, but I don’t. Instead, I’ve been looking to these farmers and the breweries and asking how it could work. What can be done to make a locally hopped beer more than just a seasonal novelty?

After talking with Greg Doroski and DJ Swanson (pictured right), brewers at Greenport Harbor Brewing Company, I can tell you that they certainly want it to work. As it stands, the recent legislation is “helping breweries grow while the farms aren’t” Doroski said when I talked to him recently. “The incentives are there for the breweries, but not the hop farmer,” he said.

That’s an interesting point.  When I asked him where the incentive were for the farmers, he replied simply “The breweries.” He elaborated by saying that the businesses have to be ready and willing to pay top dollar for hops to support these farms, helping their end of the industry grow.

“The way I see it, two related factors prevented many breweries from using more locally grown hops this harvest — price and the transition to brewing pumpkin beer. Brewing pumpkin beer is very profitable for many breweries, both from a margin and volume standpoint. Brewing with local hops is comparatively more expense and eats up valuable production space. While hop pelletization, drying and lab analysis figure in, these seem like longer-term issues to me, and more importantly, issues that won’t be resolved if local breweries don’t help local hop growers in the early stages of their development and they can’t afford to make the necessary investments in infrastructure. Don’t get me wrong, breweries are free to brew the beers they want, but to me, the use of local ingredients is important for the development and maturation of our regional identity,” Doroski said.

Swanson had a pragmatic take on the situation, noting the changes that must happen before this relationship is really viable, saying “nobody is drying or pelletizing hops around here yet.” This negates the ability to use local hops year-round, as fresh hop cones only last a day or two without being dried. He would also like to see analysis being done on the actual hops to get an idea of acid levels and content. As it stands, when you take a crop from a local farm and put it into the brewing kettle “what comes out is kind of a surprise for everyone” as opposed to their reliable hop source normally used, bringing forth predictable results.

Michael Philbrick, brewmaster at Port Jefferson Brewery mirrored many of the sentiments that the Greenport Harbor crew had. When asked about the future of hop farming on Long Island, Phil said “[It] will depend entirely on local breweries commitments to buying local ingredients. If local breweries do not embrace the local crop and find ways to use it in their products, then farmers will not have incentive to build the industry locally. I personally try to use local ingredients whenever possible because I know where they come from, it supports our neighbors, and it makes for a good story. One barrier to utilizing local hops is the varieties of hops I can get, and also the format I need them in.”

Ultimately, if the two sides of the equation can work together, there can be a truly symbiotic relationship. The breweries will have fresh, reliable, local ingredients to use in their brew while the small farms can build a sustainable and viable business model. Both parties need to work together to make this happen, just as a farm-to-table chef works with local vegetable farmers to provide the most fresh and delicious meal possible. Both sides have to listen to each other’s needs, and tailor their business to be current, spurring demand for their product.

If the enthusiasm shown by the growers and brewers I spoke to is any indication of the future of New York-grown beer, it’s looking good. John Condzella’s hop farm has already completed harvest with the assistance of their new hop-picker (acquired after a successful Kickstarter campaign in March). As for the licensing aspect, we will have to wait and see how these restrictions are enforced/altered as more breweries are granted Farm Brewery status. Who knows, soon enough we might be walking through trellised hop bines as we go to our local watering hole for a growler fill.