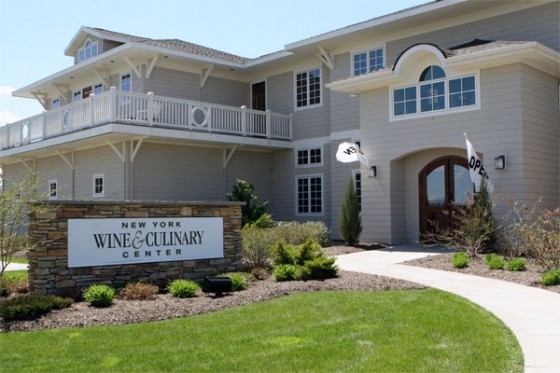 It probably shouldn’t be a news headline when a state’s culinary center carries a state’s wines exclusively, but it is when it’s the New York Wine & Culinary Center’ After a brief lapse in spring of 2012, the center has made a number of significant changes, with a clearer focus on New York products. That’s true of the restaurant, wine list, and in the news annual awards program that makes its debut Saturday night.

In full disclosure, I’m helping emcee the Saturday night event. Yes, there are still tickets available. No, that’s not why I’m writing this piece. I’m writing about this subject because the center has significantly intensified its local focus. It should never have been in doubt, but it was, and that’s been addressed in a number of ways.

First, the menu: My colleague Lenn Thompson pressed the culinary center to explain their decision to bring in non-NY wines last year; many of those wines were easy-to-find wines that exist on myriad restaurant lists. During an early-summer visit, my wife and I discovered an appealing dinner menu and a much broader, more interesting New York wine menu. There were a number of attractive by-the-glass options, including Finger Lakes rose on a balmy evening. The bottle list was a step up as well. The wines were sectioned off to feature Long Island, Hudson Valley, Niagara, and Finger Lakes. We ordered Sheldrake Point Dry Rose and a 2010 Wolffer Cabernet Franc by the glass.

We considered a bottle of the 2010 Arrowhead Spring Syrah from Niagara, but it was listed for $80. We don’t mind a markup, but that was too much. In a subsequent email, Cellar Master Ryan Baldick explained that there was a typo on the list, and the Arrowhead Spring Syrah should have been $60. He explained that the wine wholesales for $25, so $60 is a common industry markup. Also on the list for $60 was the Standing Stone Dark Red (which is Saperavi).

“The top-priced bottles are moving well,” Baldick said. “Servers are utilizing management to assist in sales tableside. We are finding this enhances the guest’s experience and allows us to educate the guest on the world class wines that New York State has to offer.”

I contacted Duncan Ross, owner and winemaker at Arrowhead Spring, to get his take on the NYWCC’s pricing. He pointed out that the same wine sells for $35 in his tasting room, $29.95 at some stores. In restaurants, it’s selling for $45 at Remington in Buffalo, $45 at Shango restaurant, and $41 for Dick and Jenny’s. “When I see the pricing on a list is so reasonable, I find myself trying new wines more often because I know the value is there, because they have taken time to select great wines and price them modestly.”

But Ross points out that the NYWCC is simply using a long-held restaurant model for pricing, which is somewhere between two and four times the wholesale price. “It sounds like they are huge fans of New York wines and are hand-selling the wines,” Ross said. “It’s all good as far as I can see.”

On Saturday night, the culinary center debuts a series of awards that will be handed out annually. They chose four categories: Eat, Love, Grow, and Drink. The Eat category honors a chef or restauranteur; the Love category honors someone in the tourism industry; the Grow category honors a producer, manufacturer, or farmer; and the Drink category goes to a winery, brewery, or distiller. Here are the 2013 honorees:

Do you know much about these recipients? We’d love to hear your take, and your experiences with each of these. This year there is a Chairman’s Award, an award that will not be annual, and represents a kind of lifetime achievement. It will go to Mary Ellen Burris, the Senior Vice President of Consumer Affairs for Wegmans. Burris joined Wegmans in 1971 as the “voice of the consumer,” said Tom Wahl, Jr., a NYWCC board member. “She was doing farm-to-table before people even knew what that meant.”