Last year, I compared Just Food’s Let Us Eat Local event to Willy Wonka’s Fancy Food Factory. I’m clearly a creature of habit (or entirely uncreative and in need of a thesaurus) as I found that exact note scribbled in the margins of my notebook as I considered my arrival to the 2013 fête that took place on October 2nd.

As I took in the now common place hand carved pumpkin sporting their logo (this year in white!) and the 39 food stuff stations each appointed with plates each more beautifully autumn than the last and marveled at gorgeous use of leaves and made a logistical plan that began with the easily accessible New York state wine stations… I couldn’t help but notice everything felt bigger. Crowded. More polished. Was Let Us Eat Local on steroids this year?

Let’s remember something before I giggle at the lady who two-hand pushed me on her way to the composting bin. The benefit, now in its sixth year, was sold out to capacity according to events and marketing director Jessica Gaffney. Just Food raises money to promote both sustainable CSA programs and community driven farmers’ markets and helps New Yorkers learn how to grow and find healthy food. All wonderful and deserving programs. So? Because the organization does fantastic work and in the end educates people about actual real food, we’ll be happy for them and the MORE of it all and the throngs of people pushing for espresso at Dallis Bros. Coffee towards the end of the evening. (I get it, that coffee rocks.) A happy thing rather than an annoyance.

It’s hard to recap an event without there being a socialite section feeling of “THIS IS WHO WORE WHAT!” but let’s take a look at the trends now that eating local is more of a “thing.”

We’re savvy.  We’ve accepted meals composed with ingredients from within 100 miles or so. In fact, it’s now generally expected at eateries frequented by the types attending this benefit at this price of admission.  But that doesn’t mean just because we’ve ponied up that we know everything about everything. Myself included.

Dave Pasternack of Esca snuck me seconds of his Crudo de Meracato after I admitted I wasn’t familiar with Long Fin Fish. (Once I tasted it, it was obviously a member of the tuna family and I felt like an idiot.) L&W Oyster Company offered whimsical but simple Blue Island Oyster Naked Cowboys with Macintosh Apples and Absinthe Marmalade. Chef Jacques Gautier of Brooklyn’s Palo Santo hand pressed tortillas for Squash Blossom Quesadillas. And the line for them was worth it.

Hooray for Long Island produce present in the most delicious bites.

The theme of consumer awareness continued with the featured wine. At FLX corner, sippers were more knowledgeable about the Finger Lakes region as a whole and asked for the Ravines Dry Riesling by name. The new-ish 2012 was on hand and though a little young, is already balanced and drinkable. (By the trough, if you’re smart.) The know-it-alls found themselves on a new wine adventure next door. Dan Mitchel of Fox Run Vineyards taught the uninitiated how to pronounce (and identify) Gewürztraminer and Lemberger grapes. I was tickled by the oft declared “PERFECT FOR FALL” after they sampled the 2010 Lemberger though the night was a balmy 74 degrees.  After all, they are right though I found this vintage a little more fruit forward than in the past.  The Long Island area kept it simpler with varietals most people have heard of. Shinn Vineyards 2010 Merlot and Bedell Cellars 2010 Chardonnay seemed to find its way into most of the glasses.

The biggest alcoholic trend wasn’t the craft beer though Brooklyn Brewery’s Greenmarket Wheat was weirdly green like a vegetal Cab Franc or Rosé that a great many people enjoyed at Brooklyn Winery’s booth but not surprisingly….Cider. 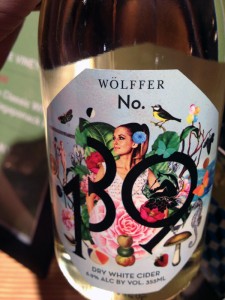 The South Fork of Long Island’s Wölffer Estate Vineyard supplies the Hamptons with much of it’s rose throughout the summer (along with chardonnay and several types of red wine.) Now, under the direction of wine maker Roman Roth and brothers Joey and Marc Wölffer they add hard cider.

If you’re one of those apple freaks who blow through disposable income on secretly importing Farmhouse ciders from the UK, Wölffer’s No. 139 hard ciders will not be for you. Despite the adorable single servings (355L), these beach-ready bottles weren’t burned into my memory as a must buy. With a clean and crisp flavor, they’re not quite an alco-pop and I wouldn’t say no to a glass as an aperitif….But there’s not much else going on. A hint of recognizable apple from Halsey’s farm down the road and a whisper of bubbles are pleasing but as a whole remains a little boring. The Rosé was more memorable with the barest of grape skin contact to give it a darker hue and a heftier feel in the mouth. 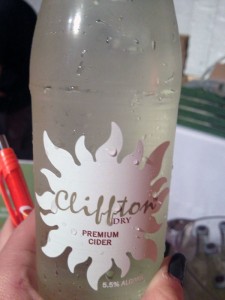 Another option: Cliffton Dry, a sparkling cider completely new to both Let Us Eat Local and my growing cider obsession. Made with apples from the Finger Lakes and cold pressed before spending six weeks fermenting, this cider is as the name suggests….Dry. Created to remind South African co-owner Shelagh D’Arcy-Hinds of home, Cliffton Dry is more of a fruit wine than a traditional cider, but the tiny beading doesn’t care what you call it. It’s got fruit flavor, but also a likable saline quality. It says, “Let’s get the night started” but isn’t incredibly complex.  I also think being new to the NYS beverage party, they weren’t prepared to answer questions about specifics (orchard location, process, etc.) but that also may have been just who I was speaking with.

I think it’s never a bad thing to create excitement about ‘unknown’ products and cider is certainly on trend, but I would have liked to see some more hard-core ciders on the docket. (Might I suggest my beloved Leonard Oakes Steampunk or Homestead Apple from Aaron Burr Cider which both have a little more ‘umph’ to them?)

The point of Let Us Eat Local is to excite patrons with fare that fits under the ever growing umbrella of New York State eating and drinking, not necessarily chasing the next best thing. In that way, this event was incredibly successful. I think as the organization grows bigger and bigger and continues to sell out this worthwhile benefit, it would be fun to see them push boundaries a little more. Cider is a good start, but there’s room for more new and funky flavors. Either way, it’s inspiring to see so many big name chefs and destination restaurants adhering to the keep it local ideology many of us have been psyched about for some time. Or perhaps that’s exactly why they’re so successful.