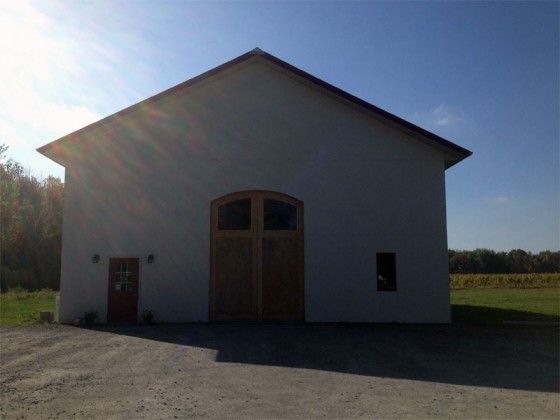 “Wine should always have a story and wines need a sense of place.” That is Jim Baker’s mantra.

Baker is the owner of Chateau Niagara Winery in Newfane, New York and strives to live up to that mantra. To that end, each wine in the portfolio has a unique story regarding its inception and creation that Jim happily shares with each interested consumer.  These stories and Jim’s own respect for the terrior of the Lake Ontario Plain motivate Chateau Niagara to offer quality vinifera wine made in the Niagara Region.

As happens often in the wine industry, the tale of the conception and creation of Chateau Niagara is a love story. It is the love story of Jim and his wife, Kathy, who met more than 30 years ago.  Jim, a native of Barker, New York and Kathy, a native of Jamestown, New York began their love affair and their affinity for wine by visiting the wineries in Chautauqua County in the Lake Erie wine region in western New York. At the time, there weren’t any wineries in Niagara County, but Jim always wanted to follow in the steps of his ancestors and grow fruit there — specifically vinifera grapes to make wine.

After nearly a ten year search for the perfect parcel of land, the Bakers purchased a parcel of land in Newfane in the Spring of 2006. Later that year, they planted the vineyard — at least part of it. Due to a problem with the nursery they bought vines from, the Bakers were only able to plant their white varieties initially — chardonnay, riesling and gewürztraminer. The following year, they planted pinot noir, cabernet franc, cabernet sauvignon and merlot.

Years later, the Bakers planted somewhat exotic, Eastern European varieties that Jim was interested in. Chateau Niagara now uses some of these grapes, such as Blaufränkisch and Turan, in its red blends.  As others, such as Saperavi and Feteasca Neagra, become viable through growth and development in the nursery that the Bakers maintain on the Chateau Niagara vineyard property, they will be used in forthcoming blends.

Jim and Kathy pride themselves as being “farmers first.”  It was this motto that drove them to locate their vineyard and winery in the Niagara Fruit Belt region on the Lake Ontario plain.  Jim’s family has lived in Niagara County for eight generations and originally came to grow fruit. After much research and study, Jim and Kathy decided that they could make high-quality wines from vinifera grapes grown in this region.

In the Fall of 2009, the Bakers built their winery and opened the following year. Chateau Niagara initially offered only white wines, but by 2011, Chateau Niagara was selling a full portfolio of both white and red wines, including  chardonnay, riesling, pinot noir, cabernet franc, Trinity (a unique Bordeaux-style red blend that flips the normal ratios by offering 80% cabernet franc) and Bull’s Blood. 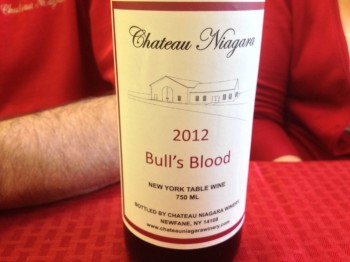 Bull’s Blood, or Egri Bikavér most commonly in Hungarian, is the most famous red wine in Hungary. This blend is controlled by the government and must contain at least three of thirteen grape varietals.  This list contains the three used by Chateau Niagara: cabernet franc, Blaufränkisch, and Turan.  Chateau Niagara is one of about a half dozen wineries making Bull’s Blood in the United States.

Of the many varieties of wine made at Chateau Niagara, Jim and Kathy drink their “flagship white”, gewürztraminer, most frequently. As with most winemakers, the Bakers find it difficult to decide which wine that they produce they like best. When reaching for one of his red wines, Jim usually selects the Bull’s Blood (if there’s any left). If not, he enjoys the Chateau Niagara Trinity or varietal cabernet franc.

I asked Jim which variety he thinks grows best in Niagara, and even more specially on the lake plain, Jim immediately responded, “cabernet franc.”  While a good winemaker must “work with what they’re given,” Jim feels that properly made cabernet franc from Niagara may be the best in the world. While it may be somewhat of an afterthought in Bordeaux, Jim feels that Niagara cabernet franccan be a shining example of how the Niagara Region is the next frontier in New York winemaking.

The 2012 growing season in Niagara was long and hot — and the resulting wines show it.  The 2012 Bull’s Blood is big and bold.  The 2012 cabernet franc shows good structure and deep, ripe red fruit. Even though Jim has had to “dial back” his pinot noir as to the ample fruit on the nose, the 2012 vintage still offers a punch of cherry fruit, which Jim calls the “cherry bomb.”

While 2013 has been nowhere near as hot ordry as 2012, Jim expects several good things for Chateau Niagara this year. Given the small amount of Turan currently growing, Jim was only been able to make one barrel of the Bull’s Blood in 2012.  As it was incredibly well received, he is excited to see how the blend will work once the grapes are harvested this year. Chateau Niagara also has plans to release an Old World-style wine made with classic Russian techniques called Kagor. His will be the first winery in the western hemisphere to make this sweet wine with 10% residual sugar.

Chateau Niagara also plans on releasing a dry rosé made from pinot noir and chardonnay called “Bliss” which was originally created for their eldest daughter’s wedding that took place at the winery in September 2013.