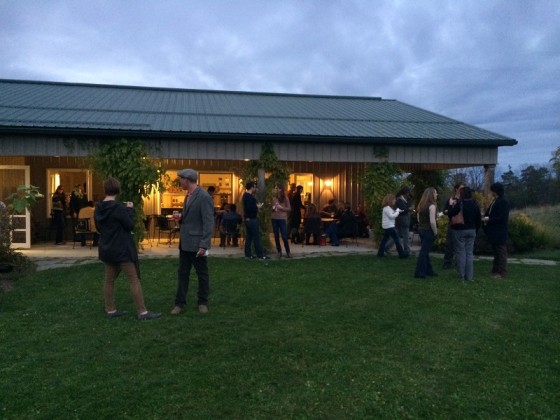 Pork chops and applesauce conjures up a combination of home-cooked meals around the dinner table with my family when I was young as well as flashbacks of the Brady Brunch repeating the phrase in their best Humphrey Bogart impersonations. What doesn’t jump to the forefront for me however is the idea of culinary innovation from this age-old combination.

When I started hearing that Bellwether Hard Cider on the west shore of Cayuga Lake was hosting dinners with Belly Ithaca, an indoor food truck from Ithaca, my interest sparked. After hearing of the success of a previous event from the duo and seeing the social media chatter I knew I had to attend the next occurrence.

That opportunity was the weekend before last when I attended a 5-course pork and cider dinner at Bellwether where each dish was smartly paired with one of their many hard ciders. And, although it may not have been a Cronut culinary revolution the likes of which are about to take the country by storm, it was most certainly a great success.

I arrived at Bellwether on a picture-worthy fall evening and was quickly greeted by the hosts of the evening Bill and Cheryl Barton, owners and operators of the Cidery, along with Caitlin (Barton) Matthewson “taskmaster” at Bellwether and husband Kris Matthewson winemaker at the new family venture Bellwether Wine Cellars.

While waiting on the patio for the remaining guests to arrive we were treated to Bellwether’s Cherry Street Cider and Belly’s Frittata on a stick.  The semi-sweet Cherry Street Cider, as the name implies, begins with refreshing apples and finishes with clean cherry and paired suitably with Belly’s Frittata on a stick which although awkward to eat was a great starter.

The audience then transitioned scenery to a setup inside Bellwether’s tasting room where the next course was promptly served. A butterflied sausage with apples and onions was nicely presented with Bellwether’s Heritage cider, an off-dry cider from European apples and the lone still cider of the evening.

Bellwether’s Legacy Cider was served to start the next course. Legacy is the sparkling sibling to the Heritage cider made with the same European apples and undergoes secondary fermentation in the bottle and bottled on the lees. Accompanying the Legacy was Belly’s Autumn Chowder, hearty with bacon, potatoes and celeriac, very well executed and one of the top dishes of the evening.

Next up from Belly was a fresh crudités of young Plowbreak Farm vegetables with a palate-cleansing buttermilk dressing. Although a great showcase of local seasonal veggies, and a standout dressing, it was likely the least impressive course of the evening considering the pig focused theme. Bellwether’s King Baldwin Cider, a dry combination of local Tomkins Kings and Massachusetts Baldwin apples returned the focus to the course and paired well with Belly’s dish.

Bellwether’s Original Cider and Belly’s standout main were also the standout pairing of the evening. The semi-dry cider is a big blend of desert apples and the refreshing crispness of the Original played impressively well together.

Other than the grocery store and restaurant staple ciders such Woodchuck and Angry Orchard my cider experiences have been relatively limited.  The aforementioned combination however may have been my cider awakening and was clearly an eye opener with regards to how a well-crafted cider can elevate an equally thoughtful dinner course.

The last course of the evening was an Apple Streusel with Whole Baked West Haven Farms Apples and Ice Cream.  A relatively simple finish but thoughtfully executed and well tied into the evening’s theme.

Bellwether however decided to up the ante and supplement the desert with a yet to be released Pommeau style fortified cider. For those not previously in the know like myself, Pommeau is a French elixir made by mixing apple juice with Calvados, an apple brandy. Bellwether engaged Finger Lakes Distilling to distill a hard cider which they subsequently aged for over two years in old bourbon barrels. They then blended it with a fresh cider did a rough filtration and then bottled it in Calvados style bottles giving a nod to the inspiration behind the creation.

The evening was a great success , a collaboration between an established Finger Lakes Cider producer and a modern Ithaca up-and-comer taking advantage of the momentum in both the eat local and food truck movements. The pride each of these hosts takes in their craft is evident through their attention to detail from the intimate knowledge of where each and every one of their ingredients are sourced through final execution.

Both Belly and Bellwether have expressed interest in continuing their collaboration with future dinners, and with a stable of other ciders and a new portfolio of wines from Bellwether along with an essentially endless supply of local resources for Belly I fully expect any future venture to be of equal success.