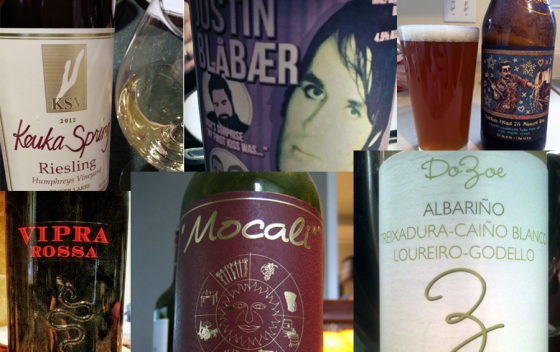 Here is a sampling of what libations passed the lips of our editors and contributors last week:

Evan Dawson, Managing Editor: Mocali 2009 Rosso di Montalcino
I suspect that, 20 years ago, wine writing was more focused on sifting through the flawed wines to find the good wines. Today, there aren’t many flawed wines on the market. Most are sound, safe, if banal. So when friends or family ask, “What wine should I drink with X?”, it’s hard to answer the question. They’re safe, generally speaking, in most categories.

And yet, oddly, I find Rosso di Montalcino to be the safest category of all. Oddly, because I find Brunello di Montalcino to be a minefield of poor value and overblown monsters. But Rosso is almost uniformly solid, understated, soft, approachable. It’s pleasing to people who like wine but don’t love it; it’s a nice, quaffable red! And it’s pleasant for wine lovers, because it’s a nice, quaffable red that offers a break from thinking too much about wine.

This was a good bottle. Most are. They won’t stamp a memory on the wine side of your brain, but they’ll offer nice food companionship. They’re good Thanksgiving bets, and most are still found in the teens. What’s not to like?

Jim Silver, Business Editor: Keuka Spring Vineyards 2012 Humphrey’s Vineyard Riesling
If upstate New York is to focus on riesling as it’s go-to grape, and apparently that is an understatement, they should be sure to plant a whole lot more of it in the best places they can find, and start naming those places. They should be sure that Finger Lakes Riesling doesn’t become a watered down cliché – generic like Kleenex – a category, if you will.

It’s been discussed before but I think the idea of proprietary place names and single vineyards are very important to the long-term valuation of the region’s rieslings.

How do I know this? Well, how does Europe? The whole basis of a Burgundy or a Mosel’s perceived value, even before it is produced, is built on the history of the ground it grows on. You may want to argue that that is no guarantee, and I’ll say you may be right, but it doesn’t matter. It is how land (and the grapes grown) there earn and hold a reputation, and thusly their value, over time.

This wine was supposed to be my glass of white before I got to my red with dinner the other night. But it was so well balanced, grip-py, complex and compelling that I got lost in it completely. Dry, stone-y, mineral-ly, and gorgeously subtle on the nose, it has a ravishingly long finish.  The Finger Lakes region doesn’t need a big-brand riesling to put downward pressure on price, and pin the quality benchmark at “generic.”  I’d be afraid we’d lose amazing wines like this Keuka Spring to commercial burdens.

Michael Gorton, Long Island Correspondent: Evil Twin Brewing Justin Blåbær
This is one horrible label.  But don’t let that stop you from trying this.  Especially if you are a fan of Berliner Weisse.

Evil Twin Brewing Company is a contract brewing company  based in Denmark that produces mainly one-offs. They have a huge following and a lot of their beers are hard to come by. Though becoming more popular and with production occurring in various parts of the country you may find them more frequently in your local beer shop.

At a recent tasting of LIFE (Long Islanders for Fermentation Enjoyment) our host was able tons we secure a god amount of their beers the membership to explore.

Evil Twin Justin Blåbær is a tart, refreshing nearly-sour like Berliner Weisse. The name is enough to make one pass on it, but the label is what makes you stop and look and maybe walk away. It screams “Tiger Beat.”.  but what’s in the bottle is worth the purchase. For your information Blåbær is Danish for blueberry, not that famous singer.

Yes it is brewed with blueberries, but they are subtle.  It is best categorized as a sour wheat beer, with low alcohol. I find it to be a great summer refresher.

The nose packs nothing but tart sour goodness. Think lemon drop candy. It has a tart-sweet playoff. The blueberries don’t come out until you taste the beer.  But again, they are subtle. The palate brings lemon, blueberry and some bready yeast. Think lemon meringue blueberry tart. The finish is not sweet at all. Crisp and clean, almost lip smacking. It made me want to go back for more.

Kevin Welch, Finger Lakes Correspondent: Dogfish Head 75 Minute IPA
While on a recent around-town scavenger hunt for a particular seasonal hard cider my wife currently has a passion for, I found myself at a local beer nirvana that due to proximity I unfortunately do not often visit. It would have of course been a sin not to look around and see what other gems lined their shelves. I took full advantage and filled my cart with the unusual, the hard to find and larger formats.

One of those that made its way home was Dogfish Head’s 75 Minute IPA. Well familiar with the more common 60, 90 and 120 minute IPA I wasn’t even aware there was a 75 minute. The 750ml IPA is actually a blend of their 60 and 90 brews but instead is naturally carbonated through bottle conditioning, which yields a very pleasant mildly carbonated beer that retains its lees.

An initial fear of an overly sweet beer due to the addition of maple syrup was unfounded and turned out to be just enough to round out the flavor. Overall, a well-balanced bottle conditioned IPA and a great choice worth seeking out.

Michael Chelus, Finger Lakes Correspondent: Bigi 2011 Vipra Rossa IGT
I’m always looking for good wine from Italy. Over the years, I’ve spent a lot of time gaining appreciation for the multitude of varieties and blends that come from the homeland of my maternal ancestors. I lived in Umbria for a semester during college and, while there, was able to enjoy many of the great Umbrian varietals. When thinking of Umbrian wine, most think of its most famous wines, such as Orvieto Classico, Torgiano and Rosso di Montefalco. In addition to these notable wines, Umbria continues to show that it has more to offer.

This past week, I found this interesting red blend. While the name literally translates to “Red Viper”, the name was inspired by one of Orvieto’s historical noble families, i Monaldeschi della Vipera. Vipra Rossa is composed of three grapes: merlot (70%), sangiovese (20%), and montepulciano (10%), that are vinified separately in stainless steel tanks, and a portion of the wine is aged in French oak barriques.

Although it is a blend using the those three, the sangiovese was dominant and you could hardly tell merlot or montepulciano were components. There was ample cherry and strawberry fruit on nose. On the palate, raspberry and blackberry dominated. It was medium body and had a medium-dark ruby color. There were nice tannins present, allowing the wine to be paired well with food. It would work incredibly well with pasta with tomato sauce or pizza. It needs more oak and balance, but at $9.99 per bottle, it’s hard to argue with it for an every day Italian red wine.

Todd Trzaskos, North Country Correspondent: Do Zoe 2012 Albarino Blend
It’s the time of year when the talk of many folks in colder climes turns to hearty red wines as if they are the panacea for dropping temperatures and shortened sunlight. On a grey autumn day of sporadic solar rays in the Lake Champlain Valley and a grey crossing into a clouded White River watershed, I felt the need for a little shot of brightness and I got a lot of it: Do Zoe sprightly white wine of Spain from the Rias Baxias.