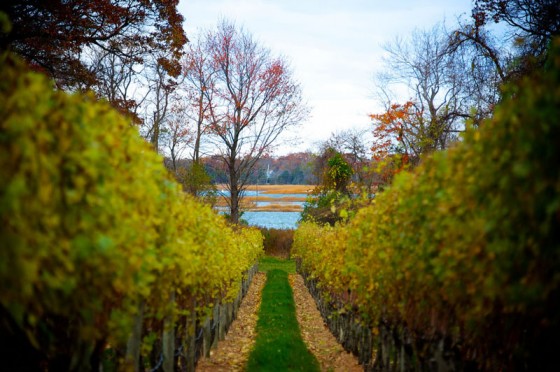 When David Acker became the fifth owner of the East Farm property in Head of the Harbor Village in 1998, he knew there was a way to fulfill his dream to use the 32-acre waterfront estate as a charity platform. As a successful entrepreneur and philanthropist, he saw money for others in that fertile ground. The farm, listed on the National Register of Historic Places, had a 300-year old farmhouse, several barns and a continuous tradition of farming that the medical device inventor wanted to maintain.

But in his own words, “Tomatoes and green peppers were boring.” So he decided to plant grapes. 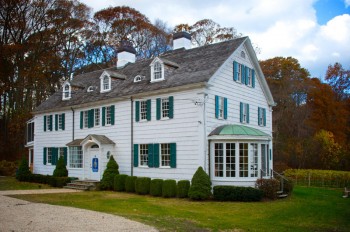 With the assistance of well-regarded local grape grower Steven Mudd, Harmony Vineyards was slowly created. But, from the beginning, Acker knew that the net proceeds of the vineyard would go to charity. In 1999, the old farmhouse, which was originally on the water, was moved to the road to serve as a tasting room and art gallery. Historically unimportant additions were removed. Plans were approved. Preparatory crops were planted. An alternating proprietorship agreement for production was created with Lenz Winery, allowing Harmony to take over their facility for 12 days per year. Finally, in 2002, 6600 vines — merlot, cabernet franc and chardonnay –were planted. And then Acker waited.

His winemaker, Lenz Winery’s winemaker Eric Fry, told him to be patient. They knew that those grapes would grow well there. They also knew that the waterfront location would mean rain water would run off quickly and Long Island Sound breezes after rain would mean less need for drying agents to battle mildews. And the waterfront location also meant the temperature was about one to two degrees warmer than further inland, which meant buds breaking earlier, a slightly longer growing season and, they hoped, riper grapes.

While Acker waited, many projects required attention if the property were truly going to become a functioning vineyard. Acker doesn’t strike me as the type to believe in “signs,” but one day while working on one of those projects in the barn, he found one anyway.

Buried in the dirt, he found a check made out to cash for $1,000. It was dated 1869 and drawn on the account of one George F. Darling. At that time, the estate was owned by Shep Jones (who happened to be the first cousin of painter William Sydney Mount), a dry goods store owner who also made loans to local residents. The story of the old check, which could have purchased the entire estate at that time, is still a mystery, but it seemed to be symbolic of Acker’s vision to find money for others in the ground of East Farm.

While his intentions were always good, he is quick to admit that early samples of the wine were not. In 2005, they had their first barrel tasting and to say that Acker was disappointed would be an understatement, “I likened the taste to what one might expect if you were to lick the service road of the LIE with your tongue.” But his winemaker, Fry, put his arm around him and told him to be patient (again) and to wait two more years.

When Acker tried the 2007 Bordeaux Blend (75% merlot, 12.5% cabernet franc, and 12.5% cabernet sauvignon), he loved it and knew they had a high-quality, salable product that could fulfill his charitable vision for the property. By 2012, they had completed a two-and-a-half year restoration of the farmhouse tasting room and had multiple vintages to serve to customers, who seem to appreciate the wine, the charitable spirit of the vineyard, and the waterfront venue only a 75-minute drive from New York City.

And like he hoped, East Farm has become a charitable force over the past few years. All of the net profits from Harmony Vineyards go to hunger and education causes that are important to Acker. He prefers to focus on a select few charities so he can have a greater depth of impact, “We really want to focus on what’s important to us. And while everyone’s needs are important, we think we can’t get the horsepower unless we focus.”

The regional food bank charities that receive contributions from Harmony Vineyards include Island Harvest and City Harvest, both dedicated to fighting hunger in the region. In the education area, Harmony gives to the Stony Brook University Foundation to provide tuition for students who could otherwise not afford it. In addition, they assist in funding the East African Center for the Empowerment of Women and Children, a school in Kenya where Harmony Vineyards recently financed a new building, the Harmony Resource Center. The vineyard also contributes to The PinkRock, a charitable division of Mather Hospital which helps uninsured or under-insured breast cancer patients pay the incidental expenses associated with treatment.

Acker lights up when talking about the future, “We continue to delight in what we’ve been able to do and what we are going to do in the future. We just want to be able to donate more money to the charities as we move forward.” His vision translates well at the vineyard. A recently built elevated grass terrace allows visitors to sample the wines while enjoying the beautiful views of the vineyard and the water. A lower picnic area with plenty of running room next to the grapes has been created for visitors with children. There is generally live music every weekend and art shows in the farmhouse tasting room, a cozy area decorated in warm colors with 300-year old accents like fireplaces with Dutch tiles, stained glass, and old plank floors.

Those visiting would be well served to try Acker’s personal favorites, which include the 2008 Harmonious Bordeaux Style Red Blend and the 2010 Chardonnay. And if you get there this weekend (November 16-17), you can take part in the Post Harvest Adult Scavenger Hunt where clever visitors can win wine and other prizes. Given the history of finding money in the dirt there, it might be worth your while.