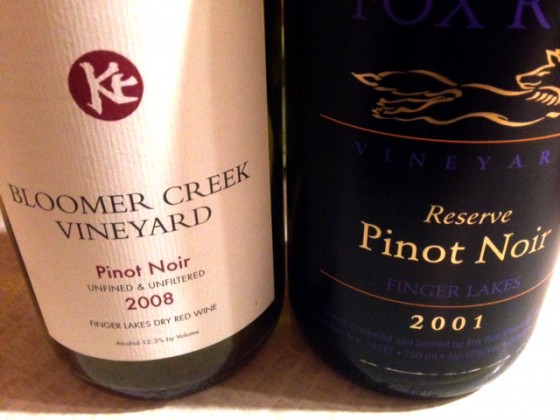 A pair of Finger Lakes pinots offered a stark reminder about the potential value — and the potential dangers — of aeration. And it reminded me that it’s easy to make mistakes when it comes to decanting.

I don’t do a whole lot of decanting, but there are wines that seem to require more air to open up. Our Science Editor can probably fill me in on whether decanting has as much impact as we think, and I don’t claim to write from the position of a scientific researcher. But based on my experience over the weekend, here is a suggestion:

Don’t decant older wines that are likely past the stage where primary fruit is still prominent. And really, don’t decant wines that cause you to say, “I hope this wine is still alive.”

That latter statement is one we made about the Fox Run, which we opened first. Upon opening, it was rather surprisingly vibrant. I won’t drop a laundry list of descriptors on you, but the wine was potently aromatic, with some nice secondary aspects. Better than I had anticipated.

But an hour later it was nearly gone. My brother-in-law, who had remarked previously that the wine was “nice,” now called it “flat and dead.” I was left with one conclusion: This wine had somewhat effectively resisted oxidation, but time was catching up to it. The blast of air that comes with the removal of the cork was enough to speed up the aging. I’m glad we didn’t decant it; we would never have known the quality it held, if only briefly.

The Bloomer Creek was precisely the opposite. On pop-and-pour, there wasn’t much there. Very little nose; it was the kind of wine that makes you wonder if it’s very mildly corked, only because it seems strangled. So we left it alone for a while. As wise men tend to say, your wine glass is a decanter, after all.

An hour later, the Bloomer Creek had blossomed, the reticent toddler who, after meeting someone new, finally warms up and then begins showing off. I’m glad we hadn’t poured it immediately and drank it within minutes. We would have missed it.

Peter Bell, Fox Run’s winemaker, offered his thoughts on our experience and on decanting in general. “Decanting older wines is at least something to resist, unless they have a lot of sediment or they are known to be robust — Bordeaux most obviously,” he said. “You are correct in asserting that the act of pouring them straight into your glass has an adequate aeration effect, as long as you are prepared to take a while drinking the bottle. Delicate older reds – think pinot – are the most prone to being ruined by aggressive aeration. Of course, this conversation is predicated on the assumption that the definition of an older wine is pretty malleable.”

And how about younger wines? Bell said, “Decanting younger red wines presents much less of a mine field. The sweet fruit aromas are often masked by what we lazily call reductive aromas. A good splash, an hour or so ahead of pouring the wine, makes a huge difference.”

But ah, how about young whites? Bell told us, “I am prepared to get all iconoclastic and aver that decanting young white wines can have a dramatic, salutary effect. Almost nobody does this, but I have taken to doing it after finding that a partial bottle tastes much better the next day.”

Kim Engle, the winemaker at Bloomer Creek, said that he finds most decanting unnecessary. “I believe most wines in the marketplace are sold ready to drink, more or less,” he said. “Without personal experience or advice from some more experienced source, the average consumer would have no way of knowing whether are a particular wine will fade or become more expressive with decanting or aeration.”

I’ve encountered a lot of friends and wine lovers to believe that a basic rule is, “The older it is, the more it needs to be decanted.” As Peter Bell explained, decanting isn’t always about aeration. And I appreciate the mystique and ritual of decanting a special bottle. But each wine has its own needs, and most of what we drink probably does not need decanting. Or, if you prefer, it’s nice to know that a wine glass can do the job, too.