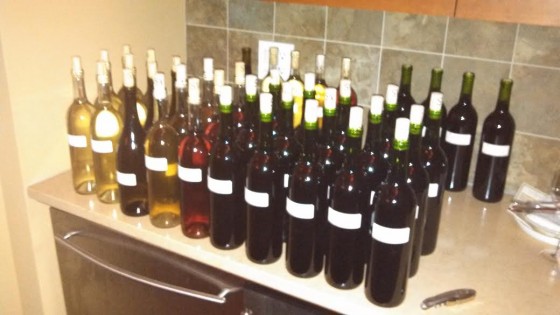 On two consecutive Saturday nights in February, Shinn Estate Vineyards in Mattituck, NY, held their annual futures dinners. 100 guests and friends of the winery spent several hours eating hummus, salumi and duck stew while tasting barrel samples of soon-to-be-released wines from the 2012 and 2013 vintages — which co-owner David Page calls two of the best back-to-back vintages he can remember.

2014 marks the 11th year that Page and his wife, co-owner and vineyard manager Barbara Shinn, have hosted the futures dinner. Over that time,  it’s grown from a small family-style dinner held in the barn to a three-room, sit-down extravaganza (or “Shinn-dig”, as the event used to be known) in various rooms across the winery/farmhouse inn complex.

Attendees have the opportunity to buy the wines at a significant discount;  2013 whites will be delivered in the spring, 2012 reds in the fall.  The money paid up front helps defray the costs of corks, bottles and labels.

Page, Shinn and winemaker Patrick Caserta poured 10 different wines at this year’s dinners, including their Wild Boar Doe (cabernet sauvignon/cabernet franc/merlot/malbec/petit verdot blend) and Haven (sauvignon blanc/semillon blend). The Estate Merlot could be drunk now, showing a good balance of fruit and tannin.  The Nine Barrels Reserve Merlot, on the other hand, is still a bit raw;  it needs some time to come together.

New this year was the winery’s first-ever riesling.  This off-dry riesling was made from grapes grown on the five-acre Schreiber vineyard which was planted in 1982 and had formerly been managed by Peconic Bay Winery. The sample didn’t show a whole lot of acidity but it’s a strong first effort that many attendees purchased.

I ended up buying riesling, Estate Merlot, Wild Boar Doe and cabernet franc — totaling only 1 case. We’re moving to the Finger Lakes soon, and quite frankly the less we have to schlep the better we’ll like it.  Besides, it’s not like there’s no decent wine where we’re going.

The dinners follow a typical pattern:  the evening begins quietly, but as more samples are poured everyone livens up considerably. By the time the evening’s raffle was held (for a magnum of 2005 Cabernet Sauvignon), things were positively rowdy. “The best part is being able to get a room upstairs at the Farmhouse Inn so that you don’t have to drive home after all that wine and food,” said Richard Dixon, of Cranford, NJ.

Repeat attendees are common;  at least one person at this year’s second dinner on February 8th had been to every one of the futures events.

Dates for next year’s event have not been determined, but will be posted on the winery’s website later this year.