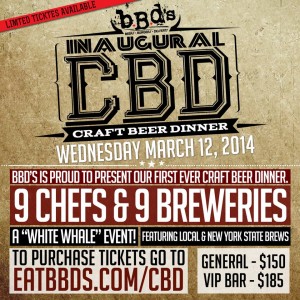 These days Long Island is laden with breweries, taprooms, wine bars and a ton of strip malls. Most nights there’s no shortage of tap-takeovers or tasting room events for the beer lover.

There’s also been a huge spike in the number of formal beer dinners taking place across the island — way too many to list here. So, every so often I’d like to introduce beer-centric events that bring something different to the table.  I also plan on attending some of these events and writing about them. Even if you aren’t able to attend, this will hopefully slake your thirst for some good suds and even better times had.

Two events happening over the next month or so have piqued my interest.

Friday, February 28: “Craft Beer: A Love Story” As part Jedediah Hawkins Inns’ “Sessions in the Speakeasy” author and beer historian, Tom Acitelli, will host a beer tasting and discussion on the rapid expanse of craft brewing .  Some of what is written in Tom’s book “The Audacity of Hops” will be intertwined with the evenings’ libations and rhetoric. Six Long Island based beers will be poured alongside hearty pub-fare in the cozy speakeasy space of the Victorian Inns’ basement.

Tom says he wants to give the audience a general introduction to the history of craft beer and especially the prominence of the NYC area in that history. The rise of IPA as the American archetype and the use of Cascade hops (the first American aromatic hop grown and used in the states) will also be a focus in the session.  Tickets are $95 per person which includes beer, food, and a copy of Tom’s book. Don’t want to drive afterward? Book a room at the inn located in Jamesport and the session is free! Call the inn for reservations 631-722-2900.

Wednesday, March 12 Beers, Burgers and Desserts’ Inaugural Beer Dinner. So in case you haven’t heard of Beers Burgers Desserts in Rocky Point, now you have. Opened last year, BBD’s has quickly become a regular watering hole for me and my friends. Remember that feeling you got when you were a kid pulling up to an amusement park or a fast food joint with a playplace? Well that’s pretty much how I feel when I see the BBD’s sign poking through the unassuming strip mall facade. More than 20 draft lines pour almost all craft beer with a pretty good local representation. The bacon-fueled menu is second to none when it comes to carnivorous indulgences.

Even though beer dinners are a dime a dozen these days, chef and owner Ralph Perrazzo has upped the ante. He is bringing in 9 chefs and 9 breweries for the restaurants’ first-ever beer dinner. Not only are the chefs all top notch, the breweries are all based in New York. At $150 a seat, this dinner isn’t chump change.  That being said, with the talent and quality of food flying around, I could see it selling out quickly.  Call the restaurant for reservations 631-849-1620.

The Chefs and The Beer