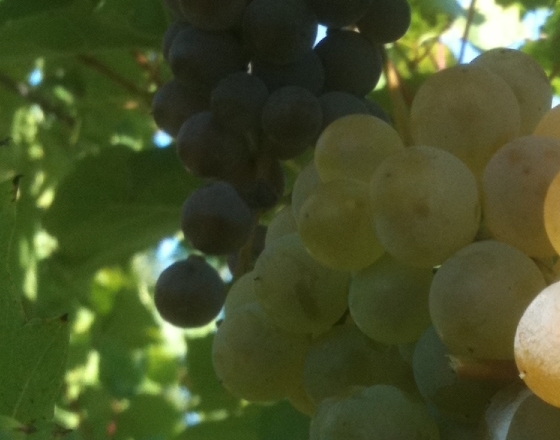 It was very tempting to approach this subject indirectly through a wine science fiction sort of allegory. The tale of a race decimated by plague and forced to breed with other relative species in order to survive. The social stigmas faced by the viable offspring:  the challenges of relocation and settling of new lands,  the strange and divergent characteristics that began to appear in subsequent generations. It’snot far off, as a version of the inter-specific hybrid grapevine story, and of the unexpected mutants that currently exist among us, in the form of the cold climate grape called Frontenac.

The Frontenac grape was bred by the University of Minnesota and introduced commercially in 1996, a hardy hybrid that has been mentioned previously in these pages. Not long after it was planted in a number of cold-climate vineyards, it was followed by the first report of Frontenac Gris spotted by Peter Hempstead in 1998 at the university where it was patented and soon released to wide planting in 2003. In 2005, Frontenac Blanc was identified in Quebec, and then subsequently found and propagated in other places. It was officially released by UMN in 2010, and now I’ve even got a couple dozen of the creatures in my own test vineyard.

This kind of mutation is far from common, yet also not unheard of in the wine world. In fact there is a famous example that is familiar to many of us. There are more than 1,000 clones of pinot in production according to ‘Wine Grapes’ and while variation may occur in the growth and skin color, the underlying genetics remain the same. Chromosome changes in pinot noir led to independent mutations such as a grey skinned form that most recognize as pinot grigio, and a white version known as pinot blanc. It is assumed that the variations in pinot and other ‘wine grapes’ became apparent because of the wide plantings and hundreds or thousands of years of cultivation in which to find the radical expressions. How interesting then for us to bear witness to such a rare deviation in Frontenac, in our own era, and in such a short span of time.

I have seen this kind of mutation with my own eyes and it is certainly a site to behold.Two adjacent spurs on the same cordon, one throwing clusters of greyish-pink, and the next of translucent gold.

The vine that we spotted at the Cornell Vineyard Trail in Willsboro, NY, has shown the deviation in two consecutive harvests and it is supposed with some certainty that cuttings would propagate true to the white variation.

I recently caught up with Andy Farmer of Northeast Vine Supply by phone to talk about Frontenac. He was in between cold-climate conferences and the large-scale pruning jobs he and his crew have been occupied with, cutting wood in frigid temperatures to tame vineyards all over the northern United States and to provide the plant material necessary for propagation. I wanted to get his perspective on the arc of Frontenac’s distribution.

I’d assumed that where once Frontenac Noir was the leading red grape planted in North American cold climates, it had lost ground to Marquette which has become a real favorite. He said that this was true for a time, but that with the recent trend towards interest in sweeter wines, he’s seen Frontenac orders rise again because its profile lends itself to sugar balancing out acidity. Also, producers have realized that Frontenac Noir, Gris and Blanc all have the same favorable growth patterns, which simplifies trellis and canopy management while offering multiple options for winemaking.

After the release of Frontenac Blanc Farmer said that he propagated and sold 7,000 vines right away and it is quickly becoming the top selling white variety. From Montana to Maine it seems to be working well and wineries are feeling good about the final products. The release of Frontenac Blanc came without a patent, but has included a $.25 per vine voluntary royalty, proceeds of which go to Minnesota Nursery Research Corporation. Andy is looking forward to seeing how those funds will be invested for future breeding, a program in which Frontenac is an important genetic component. 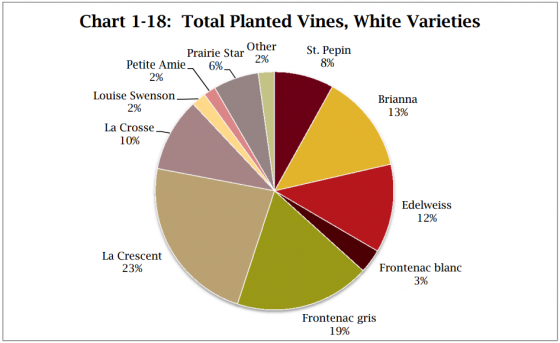 Frontenac Noir is a versatile grape that has been used for a range of dry-to-sweet red wines, rosé, and fortified styles as well. Cherry is the usual descriptor, followed by bramble fruit, even plum when ripe, with high freshness and very low tannin. It has been likened in textural profile to Barbera. Dark color takes easily, and pigment extraction is not an issue. In finished wines the deep hue can set the taster up for a big extracted experience, but the tannin structure is not there to deliver, which can be confusing. I’ve had a hard time finding a dry version that appealed to me. Acidity is the framework, and it seems that the versions with a few grams plus of residual sugar, make for a tastier balance, emphasizing the freshness and delicacy. Oak, if not used judiciously, can easily overpower the wines, and chemical de-acidification if not done carefully, can flatten them.

Frontenac Gris can be more challenging in the winery. Although grey, it still wants to give up its color very quickly. Most folks crush and press right away, or opt to press whole berries or clusters. Stone fruit and citrus aromatics and flavors are the signature, and I have also found that sometimes with light skin contact, some strawberry notes are also present. Even a short period of contact after crush and before press, can yield intense pink tones in the must that evolve into salmon to amber toned color during and after fermentation;  hues that have traditionally been regarded as unfavorable flaws in commercial white wines. Maybe the rising interest in orange wines will create opportunity here.  To wit, I heard from Richard LaMoy at Hid-in-Pines Vineyard in Morrisonville, NY who relayed, “Here at Hid-in-Pines we fermented Frontenac Gris on its skins for the whole fermentation. It came out with a nice crisp peach flavor that we finished semisweet. The color is a very unique autumn amber. Personally I enjoy it over the noir, but many still prefer the original Frontenac.

I had the opportunity to try an experimental Frontenac Blanc and peach juice, apple skin and citrus pith are what I have in my notes. A few weeks ago I was visiting with Chris Granstrom at Lincoln Peak Vineyard in New Haven,VT. He has a couple  of acres of Blanc that are in wine production but also serve as a healthy mother block for Andy’s propagation work. As we were talking, a regular customer stopped by for a case of their Sycamore (60% Frontenac Gris – 40% Frontenac Blanc) which he had ordered for pickup. It is fleshy, fresh and tropical, done in a semi-sweet style that is not the wine Chris had originally planned to make, but one he does in respond to the patrons’ demand. This grape is very new to commercial production, so it may be a little while before we any significant number of varietal bottlings, but they are certainly coming.

After settling on reasonable understanding of what Frontenac is, I had an experience that forced me to adjust perspective, and had me happily drinking my words.

While attending the annual meeting of the Adirondack Coast Wine Association, and partaking in the ensuing shared tasting, Sean Frey from Elf’s Farm Winery & Cider Mill came over with a gleam in his eye and an unmarked bottle in his hand. The aromatics were reserved, but what I tasted was smooth and well balanced, rolling with bright cherry, blackberry and plum skin. The wine was completely dry at 12.5% ABV, yet the fruit was pure enough to leave a faintly sweet beam lingering on the tongue. It was a barrel sample of a Frontenac Noir from the warm, ripe, pretty-much-perfect 2012 vintage — crushed, cold soaked, and pressed to new barrel ferment, with one year on lees in the same barrel, a transfer rack to stainless, and ready for bottling.

He said that he’s been working on producing something like this for five years now, and finally feels like  this represents what he’s been after. It was really good, and I’m going to stop by to get some once it is labeled.

Vintages are still far more mutable than the grapes themselves. Report is the 2013 Elf’s farm Frontenac Noir is not showing quite as good as the 2012, either in quantity or quality, so look for the new 2012 release and get it while you can. And remember, you never know when things will change again.