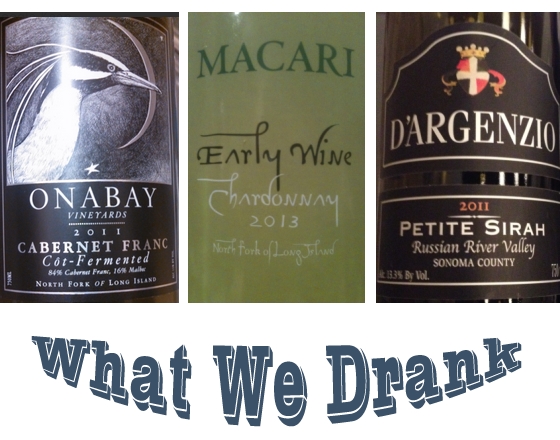 Todd Trzaskos, Contributing Editor: Macari Vineyards Early Chardonnay 2013
It being the New York Cork Report’s 10th anniversary I felt compelled to open something from the Empire Wine Cellars Club selections. This is the second time we’ve encountered this wine via the club, and I’m starting to think I need to buy direct.

The flavors of this wine bring back youthful memories of summer bike rides to the local soda shop where we’d turn spare change into a treasure trove of penny candies. It’s intensely possessed by the spirit of sweet tarts…the green apple and lemon ones especially.  Many might take it for a sauvignon blanc at first sniff, the pyrazine aromas are so fresh and grassy. Across the tongue it is pretty darn fresh as well. Snappy, crisp, flavorful with additional layers of fruit from stone to Pomme to citrus, and then it washes out clean leaving a tingling vacancy that cries to be occupied by another splash.

My better half said, “I remember this wine, it’s the one that convinced me that I could like chardonnay.” Granted, she has a cool to cold, alpine climate palate, so even this wine, as it warmed, was called out as having the perception of some residual sweetness.

It’s a really nice, and right tasty wine at an extremely reasonable price. I know this must sell out, so if it is too late for you this time, put it on your wish list, because the next release will be here before you know it.

Tracy Weiss, Long Island Correspondent: D’Argenzio 2011 Petite Sirah
I was introduced to Sommelier Hillary Fornell through NY Vintners, a fantastic wine shop in downtown Manhattan. Hillary, in turn, introduced me to D’argenzio Petite Sirah, a well-made wine to rejuvenate your lust for reds as we approach what I call the late winter heavy wine blahs.

From the Russian River Valley in Sonoma, the 2011 Petite Sirah is dark and deep and clearly plays emo in its apartment above its parent’s garage. Intensely red in hue, it’s got graveyard dirt on the nose with dried black roses and dates rounding it out. Some of the Cali Sirahs get too muddy, but this was all savory softness with a good amount of acid to keep the heaviness balanced. Tannic, but not chewy, I’d be into this wine all week as we GOD WILLING say good bye to winter. The winery and tasting room is in Santa Clara with an annex in LA and has me wanting to visit and check out its urban-ish tasting rooms for more than the inoffensive weather.

Paul Zorovich, Finger Lakes Correspondent: Onabay Cot-fermented Cabernet Franc 2011
Lenn sent this as part of the Empire State Cellars wine club a while back. I needed some red one night, so I pulled this out. Honestly, I find the name “Onabay” sort of silly (if it’s from the East End of Long Island, of course it’s from ‘on a bay’ – or is it supposed to be pig Latin?), so that probably colored my initial reaction to the wine.

I thought it was overly aggressive, likely because of the malbec in the blend, and I forced myself to drink it. Over the course of several days, though, it mellowed out and by the last glass I found myself actually quite enjoying it. I still think “Onabay” is a silly name, though. (I do like the screwcap.)

Michael Gorton, Jr., Long Island Correspondent: Scarola Vineyards 2005 Merlot
St. Patrick’s Day came and went.  Corned Beef and Cabbage, Shepherd’s Pie and plenty of soda bread was  consumed.  To wash it down, plenty of beer was had. Maybe too much.  I’m Irish, what to do you want? Of all the tasty beverages that went across my lips, the one that stood out was a simple bottle of wine that I had mid-week.

Frank Scarola doesn’t have a vineyard. He buys grapes from growers and vineyards on the island and the wine is made with the guidance of Roman Roth. I first tasted this wine a long time ago when this blog was called Lendevours and there used to be a “Cork Club”.  This was part of that shipment. It moved me then, maybe back in 2008, I think, so much that I had to meet Frank. We met at what is now Cedar House on Sound Bed and Breakfast in Mattituck and talked about wine. I bought 2 cases of wine from him and there was plenty of this wine in it. Last week, I drank my last bottle.

For those of you who know the 2005 vintage, there were two.  One before the rain.  One after the rain.  It rained for 21 days in October 2005.  I remember, we just bought our house, and I was concerned that there would be a leak or something.  There wasn’t.

This wine was made with grapes following the rain.  Those who waited were rewarded.  And those who held on to bottles like this were rewarded as well.  The acidity was the backbone of the wine.  There was still some cherry and plum, but earth and spice and savory herbs had taken over.  Graceful, like a waltz, it showed balance and structure that held up to the time in the bottle.  To think that this was about $16 when it came out.  If you still have a bottle or two, hold on to it.  There is still some life, and I wish I did.