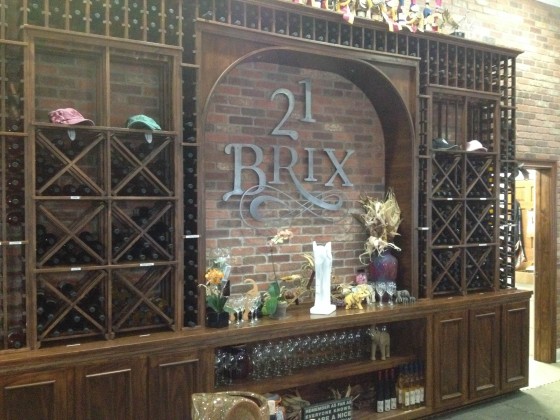 Grape growing is big business in Chautauqua County and has been fore more than 100 years. The region gained prominence for grape growing when the concord grape was brought there in the 1870s. Called “America’s Grape Country,” the region is the oldest and largest concord grape-growing region in the world. The success of that grape has long been the dominant theme in the area, eclipsing the limited success vinifera grapes have enjoyed. There are more than a dozen wineries in Chautauqua County today, nearly all producing some vinifera wines.

All of these wineries have had varying levels of success, but one has received a lot of praise in recent years as an up-and-coming winery and recognized producer of fine vinifera wines — 21 Brix Winery in Portland, New York. Its relatively new having opened in 2011, but the land around it, owned and operated by the Jordan family as Olde Chautauqua Farms, has been an operating grape farm since the 1960s. Olde Chautauqua Farms has grown both native and vinifera varieties of grapes since the 1960s (as well as other fruits and vegetables) and has grown into the largest vinifera grape farm in western New York. Today Olde Chautauqua Farms covers roughly 300 acres, including 17 varieties of grapes, most of which are vinifera. 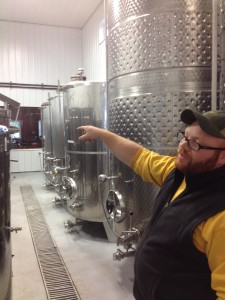 Winemaker, Kris Kane, has been an employee of Olde Chautauqua Farms for most of his life, since it’s owned by his family. He’s helped in all phases of farming since he was a child but he had dreams of becoming a chiropractor and massage therapist. During each one of his school breaks he’d come home and work on the farm, slowly bringing his dreams a tad closer to his “roots.” Then in his junior year in college the idea of opening a winery came to him.

After graduating from college, Kris returned to his family farm and spent time learning more about vinifera grapes. When a job opened up in 2005 at Presque Isle Wine Cellars in Erie, Pennsylvania, less than a half hour down the road, Kris jumped at the chance. He started off in the cellar, literally but in a few short months he became winemaker at Presque Isle. He worked as winemaker diligently for three years until another opportunity arose – one that would give Kris insight into large-scale commercial wine making.

In 2008, Kris went to Australia to work for Stewart Wine Company outside of Melbourne and returned to the cellar taking the position of lead cellar hand and night shift supervisor during harvest. Having been armed with wine making experience and some knowledge of large-scale winemaking, Kris returned home to Portland, New York and began planning to open the winery with his family. In 2009, plans for the winery and building were underway and by 2010, ground was broken on 21 Brix Winery.

21 Brix Winery gets 70% of the grapes from Olde Chautauqua Farms and sources the remaining 30%. The 70% is made of up vinifera varieties which gives Kris a good amount of control over the grapes he uses in making his wine. 21 Brix made its first vintage at Presque Isle Wine Cellars in 2010 before its facility opened in Portland. When the winery opened in 2011, it was able to offer 1,500 cases in its inaugural vintage. The winery is now a state of the art production facility, the size of which is not seen frequently in western New York.

Kris describes himself as a naturally driven person. Like many winemakers, he loves the entire process of winemaking. It’s his life, not his career. Many nights, his wife, Nicki, has to call him to make sure he comes home. You can’t really call it being lost in his work when Kris doesn’t see it that way; he’s lost in his passion. For Kris seeing the smile of a customer tasting his wine is far greater than watching cases leave the winery.

Kris’ passion, drive, and success at winemaking have brought him recognition from the industry on a national scale. He was named as one of the Top 100 Most Influential U.S. Winemakers by IntoWine.com. The list includes such notables as Paul Hobbs, Paul Draper, Merry Edwards and Phillipe Melka. The inclusion in this list is quite an honor for the 32-year old winemaker who works in a region that he says is “often overlooked.” Although it may be overlooked, the choice of the Lake Erie wine growing region of New York was a natural decision for Kris given his family’s history, as well as that of his step-father, Michael Jordan.

When drinking his wines, Kris prefers the aromatic whites – sauvignon blanc, riesling and gewürztraminer. The 21 Brix portfolio is full of aromatic whites, as well as reds like syrah, cabernet sauvignon, blaufränkisch, and cabernet franc. The portfolio also includes hybrid grapes such as Noiret and Vidal. Native grape varieties are also reflected in the portfolio given how well they grow in the region and their popularity with customers. Kris fells that “if you can make good wine on the East Coast, you can make wine anywhere in the world.”

Of the grape varieties that do well in Lake Erie, riesling is number one, according to Kris, with chardonnay, gewürztraminer and blaufränkisch following close behind. While cabernet franc does well both in Niagara and the Finger Lakes, it doesn’t do as well in Lake Erie. Kris takes the lead from some of the best wineries in New York. He takes those ideas and expands on them based on his experience to find what works best in Chautauqua County.

Kris’ proudest achievement so far has been his 2011 dry Riesling which took best in show honors in several competitions, including the Pacific Rim International Wine Competition, and exceeded the showings from some of the best in New York. Kris feels, “This shows riesling is a New York State variety, not just one that excels in one winemaking region of the state.

In Kris’ mind, Lake Erie is an emerging winemaking region though it may never get fully out of the shadow of the concord grape. But Kris feels the region needs to tap into the historical roots of the area and its rich history of grape growing and not just embrace but be proud of its roots and represent them by growing the best vinifera possible. Then, of course, sharing that with the rest of the state and the country.

There are enough vinifera grapes being grown in the Lake Erie region to allow the local winemakers to not settle for subpar grapes in terms of quality. The wineries can now be selective in choosing the best grapes to make the best vinifera wines possible. This has raised the bar for local wineries and should allow the region to grow and be able to compete with the Finger Lakes and Long Island heading into the future.