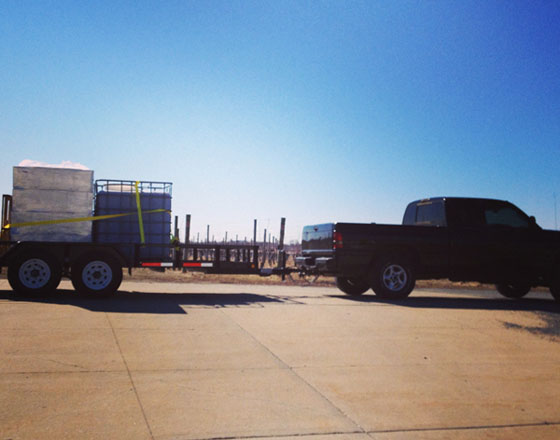 Getting past New York City with a trailer overloaded with 350 gallons of wine had been a major milestone. As the truck lurched and faded, lurched and faded, every bang of a pothole had me questioning my decision on this endeavor, but I still had four hours to go until the Finger Lakes. I was taking perfectly good still red wine to Bellwether Wine Cellars in Trumansburg so I could turn it into an ode to dry lambrusco (an endeavor that had given more than a few colleagues on Long Island a good laugh). I needed to use their pressurization tank and bottling line.

Since I’d be spending the next few days in the Finger Lakes wine region finishing my project I decided to make a few appointments with some wineries and winemakers. I expected to sample some wines, have some conversation and come away with a nice little article. But what happened was completely unexpected. It wasn’t the wine but the experience I had actually visiting each place that would completely inspire and embolden me.

First stop was Ian Barry. Most of you may know him as the former winemaker at Villa Bellangelo, but soon he’ll be launching Barry Family Cellars. For a big guy he makes wines that are light on their feet and still pack punch. His 2012 Reserve Riesling for Bellangelo was easily the best 2012 Riesling I have tasted in a long time. While I wasn’t able to try his currently unreleased family wines what caught my eye was what was behind all his wines and projects. There was a dogged persistence, matched with the patience of a saint. He has spent the last 10 years slowly accumulating a piece of equipment here or there, slowly building to the point where he can launch his own project.  Barry Family Cellars has three vintages of wine ready and yet none of it has been released. I realized that it was this sense of persistence coupled with patience that a lot of folks in a lot of industries, including myself, could learn from and aspire to.

Next was Nancy Irelan at Red Tail Ridge. By now many of you know of her forays into obscure (or weird) varieties, in addition to her great rieslings and pinots. She has always been a wealth of information and a “must stop and visit” when we are in the region. Having spent her career on the technical side of wine growing you’d expect her projects to be perfectly thought out and executed. That’s why when she handed me a bottle of her 2012 Riesling Petillant Naturel (or pet nat, a wine that is bottled before primary fermentation finishes, making for a technical winemaker’s nightmare) I was blown away. It was delicious, like a toasted sweet brioche roll dragged through a lemon salad dressing. It was out of character, perfect, and proved once again that by leaving your comfort zone great things can happen.

Rick Rainey, one third of Forge Cellars, was my third stop. They have seen their star rise quite quickly and are known for their pinots and rieslings. They’ve attained a lot of notoriety by questioning commonly held beliefs in regards to how wines in the Finger Lakes can or should be made. Trying his 2013 Verrill vineyard Riesling straight from the barrel was all the convincing I needed. I’m not a riesling pro, but I can tell you that the balance achieved with a little barrel (no flavors, this was an old barrel) was exactly what I would want in my own. Fleshy but bright, focused but giving. To keep a region moving forward, pushing the envelope should be a hallmark and celebrated. We’re lucky not to have AOCs, we should remember to take advantage of that.

Johannes Reinhardt, another who really needs no introduction for readers here. His Kemmeter rieslings have unsurpassed clarity that is truly rare and easily rivals many in Germany.  They make me feel under qualified to comment on them. While the wines are impressive for me, the experience before the tasting was what struck me. This appointment-only establishment managed by him and his wife, has bucked the trends and isn’t the least bit concerned of it. One offhand comment really struck me, both in its simplicity and truth – he wanted to love the experience of pouring wines for folks as much as they may enjoy it. We can all talk about bottling passion, but his is putting it on display on the labels and next to the wines in the tasting room ups the game. It comes through with as much clarity as his wines and it’s something I hope never to lose or forget.

Finally, I visited Kris Matthewson, winemaker at his recently launched Bellwether Wine Cellars. Some may know Kris because his fingerprints are all over wines from his former employer Atwater. Focusing on single vineyard Finger Lakes pinot noir and rieslings, he doesn’t shy away from the experimental (pet nats, natural ferments, dissolved co2) but still holds an eye on the traditional. The energy he throws behind winemaking is inspiring and nearly impossible to keep up with, which is reflected in the number of wines he’s producing. You might even start to worry that he won’t be able to keep up the crazed pace and then I was invited to his house for a simple dinner of roasted chicken accompanied by his 2012 Sawmill Creek Pinot Noir. This is where everything slows to a crawl. The tension between juicy and fatty chicken and bright, luscious pinot creates a tension that still has me salivating. It’s a tension that shows in his wines, his winemaking and even in himself. Out of this tension comes a deceivingly simple, yet beautiful experience. He demonstrates that balance comes in all shapes and forms.

After a week my time came to a close and the wine was in bottle. Having vacillated between sure and unsure about my own wine since before harvesting in October, I would have never have thought a week in the Finger Lakes would leave me more sure and emboldened than I had been when I left. Lessons in patience, persistence, pushing the envelope and your own comfort zones, instilling passion in all aspects and seeking tension and balance will be things I lean on from here on out. While our paths may be different, the hope is to always keep pushing forward, damn the torpedoes or potholes in this case. Cheers guys!