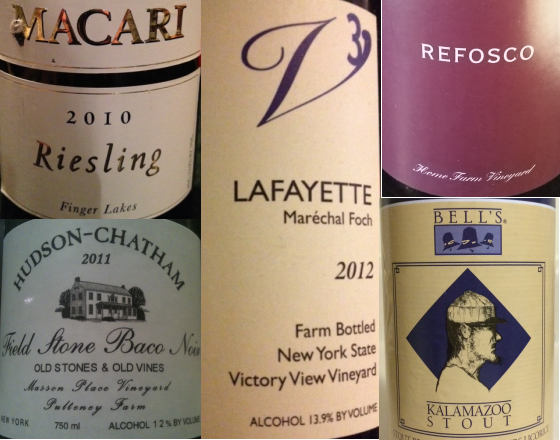 Editor’s Note: Starting today, we will publish WWD twice a month, rather than every week, going forward

Amy Zavatto, Contributing Editor: Macari Vineyards 2010 Riesling
Kelly Urbanik’s first vintage with the Joe and Alexandra Macari, this Finger Lakes-sourced beauty started off with a little petroleum on the nose that blew off after a bit, and then opened up with aromas of beeswax, fresh, juicy pears, nougat, and white flowers. It’s mouth filling and lush, with weight and length that tells of the warm vintage this came from, but with a delicious zing and bite of minerality, grapefruit juice, and zest, and sweet-salty finish that keeps you interested (if you weren’t already).

Todd Trzaskos, Contributing Editor: Hudson-Chatham Winery 2011 Field Stone Baco Noir
I had a long busy weekend in Washington DC, via Great Barrington MA, and on the way home, I had the good timing and great fortune to spend a whole day in Columbia County in  New York’s Hudson Valley with Hudson-Chatham Winery operator Carlo DeVito. The last time I’d been in the area was in the late 1980s when the concept of wineries in the county was beyond comprehension.  It’s a different world there now, and  the DeVitos have led the charge into a tasty future.

This wine has a very interesting nose that is an amalgam of inkwell, dried black raspberries, anise spiciness from the barrel and a little earthy bit of fresh dug celeriac. Dense, black fruit fruit paints the tongue with a chewy layer conveying a gravity to the wine that has more pull than the 12% ABV on the label.  Despite the flavor density the textural experience is very soft on the palate through the first three quarters of the run.  Then the texture gets edgier towards the finish, mingling sour cherry skin, barrel toast and a barely green bitter note that might really excite those with a penchant for not-overripe Cabernet Franc.

I opened and tasted this with some local hybrid grape winemaker pals. Our consensus that the wine had hints of both Puglia and the Loire, but certainly spoke of some place in a language with which we were not familiar, but would like to learn to speak.  When I brought the bottle home for familial evaluation, I had to fight to save enough to write these notes.

Michael Gorton Jr., Long Island Correspondent: Channing Daughters Winery 2012 Refosco
I said earlier this week to Lenn that I would submit the shortest What We Drank. Here is what I said when describing this wine: Juicy; Rustic; Gulpable; Delicious. I’m adding, get some. Now.

Every region of wine has a cult wine. Some cult wines are single vineyard, some are limited production wines and some are varieties that only a certain vineyard grow. Like Chenin Blanc from Paumonk Vineyars. Well, there might be another grape variety and varietal to add to cult status. Channing Daughters Refosco, a black grape variety that has been made into Rosé until this 2012 vintage. It is a tightly packed wine with loads of dark fruit notes and some blue fruit notes with a strong floral edge that gives it some finesse. Bright, fresh and young, it needs a some time to unwind and come together.

Seriously, only 58 cases were made, and if you haven’t gotten your hands on it, you missed something special.

Paul Zorovich, Finger Lake Correspondent: Ravines Wine Cellars 2012 Keuka Village Red
The move to the Finger Lakes house is over, but on the other hand it’s only just begun. Not only is there a whole lot of unpacking left to do, there are closets to build out (which is made harder when your closet designer uses the wrong dimensions so you have to send a bunch of parts back for the right ones), and there are jobs to find. Luckily the last one has been taken care of, as both of us will be working at Ravines Wine Cellars, albeit each in a different tasting room.

Since it’s always a good idea to be intimately familiar with your own product, we opened a bottle of Ravines’ Keuka Village Red. We’ve always liked this blend of Noiret and cabernet franc. It’s basically been our house red (and I guess it had better be, now). At 12% abv it isn’t too strong, and the cab franc gives it a nice spicy finish. It’s fruity and uncomplicated, which is what I needed after wrestling with head rails and brackets and shelving.

Gibson Campbell, Long Island Beer Correspondent: Victory View Vineyard  – 2012 “Marechal Foch”
I received this bottle as a gift from someone who lives not too far from this estate winery on the Upper Hudson Valley Wine Trail. I had no experience with this grape variety aside from hearing about it, so I wasn’t quite sure what to expect.  My wariness of hybrid red grapes has been lessened by Keuka Lake Vineyards “Leon Millot” in past years, so I approached the wine with an open mind.

The color was inky-purple to black.  The nose was full of potpourri spice and red currant aromas.  The body of the wine was almost thick, with a lot of texture and chewy tannin. The palate had an intense ripeness that was overtly jammy with some raspberry and pomegranate.  With some technical notes on the back the 13.9% ABV was a result of the early ripening of this variety (picked on Sept 9th 2012 at 24.5 Brix).  Six months in Minnesota Oak gave it a tropical coconut note on the finish that reminded me of heavily oaked Tempranillo.  I probably wouldn’t drink this wine often, but it was quite interesting to open up and try with a few friends, whom like myself, enjoy trying unique wines.

Next, on your first taste you’’ start off with an initial hoppy bite which quickly transitions into the expected smooth mocha and dominant dark roast coffee and malt mix with a final reemergence of hoppy bitterness at the end for a dry finish. This stout is well balanced and carries great earthiness from the roasted malts. This beer comes across at 6.0% ABV and 51 IBU.

The brewer’s licorice used here comes across as a natural result of the hops and coffee, not just a headline catching brewmaster’s experiment. The possibly preconceived strange choice, successfully marries the bitterness of the hops and acid of the coffee so well that you may not even realize it was the result of the licorice addition but rather inherently derived from the other core ingredients.

Overall the Bell’s Kalamazoo Stout is an exceptional stout with great coffee flavors that was smartly crafted by the Kalamazoo Michigan brewery.