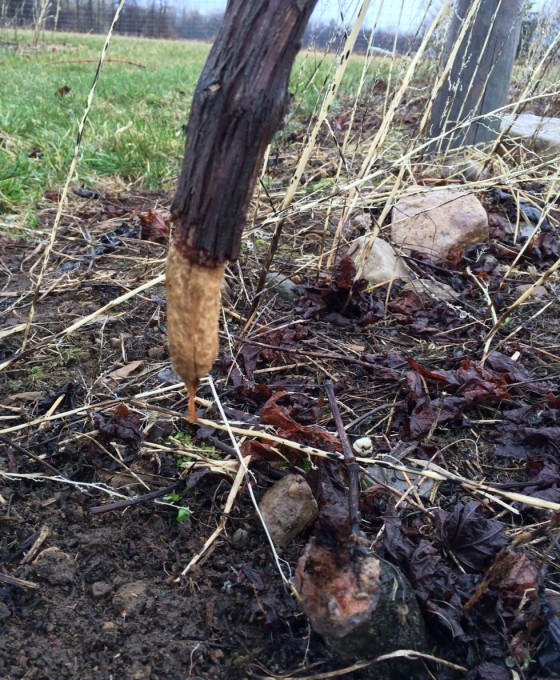 Word from the North Country has been relatively good as regards vine damage, based on early random bud samples and their reported survival rates after the deep cold that was delivered this winter. Once we get out into the vineyard to do the pruning, and we visit every vine, that’s when you get a true picture of what is going on. In this particular case, the visual I got was a real shocker.

The buds may have held up,  but while working a couple of Lake Champlain Valley vineyards in NY and VT, we found some pretty significant trunk damage.

Gnawed by rodents: from heavy nibbling, to complete girdling, and on to fully severing severing vines from the ground. Voles is the best guess, and I’m no genius, but it’s probably the Meadow Vole (Microtus pennsylvanicus) to be specific. It was too easy to imagine that the deep snow cover had facilitated and encouraged their voraciousness. Even though we had an eruption of Snowy Owls in the valley this season, when there is  a population of creatures where a single female at year of age can produce 70-80 offspring in a calendar cycle…I can only imagine what had been going on under the white winter blankets.

Many of us saw extensive vole networks left through the grass in our yards, and left abandoned once the snow receded. It seems that those little critters can cover a lot of ground. The damage we found seemed to be concentrated in vineyard edges, in areas closest to field and forest habitats. I put a call out to the cold climate community for reports and mitigation strategies, and got an interesting variety of answers.  Mostly is was shock and surprise at the extent of the damage, some theories and suggestions, and even a recipe for rabbit stew, if that was who was to blame.

“I’ve honestly never seen anything like this in a commercial vineyard before. Sometimes some gnawing, but never girdled like these were.We like to blame vole damage on mulch around base of vines (providing shelter) but honestly, I haven’t run across much of this type of injury. Wow. ” -Timothy E. Martinson, Ph. D. – Cornell Extension

“‘Wow’ is right! That is some incredible damage. We do have problems with voles here in Minnesota, but that is about the worst I’ve ever seen. ” Peter Hempstead – University of Minnesota

“Are you sure you don’t have Beavers!” – Ray Knudsen – Champlain Valley Vineyards, Benson, VT

Richard Lamoy at Hid-In-Pines Vineyard did have some replacement vines get hit by similar activity, while older La Crescent nearby remained untouched. He had a theory that is close to my own ” … that heavy ice layer around Christmas on top of a few inches of snow. It was cold enough then that the ice stayed and we got more snow all winter.  The ice made a natural ceiling for the voles or whatever to burrow under.  They used the opportunity to feed on the vines where they normally wouldn’t, being protected from the owls and hawks above.”

And it also seem would seem he has painful experience that is worth considering: “…that ice storm back in 1998…a similar situation in my apple nursery where I had 500 grafted apple trees. I lost all of them that year to girdling under the layer of ice.”  Backing up this information was the report from Terence Bradshaw at the University of Vermont. “I haven’t seen anything like that on grapes, but this is looking like one heck of a vole damage year for apples. I’m getting reports on damage (and seeing it in my own blocks) from all over the place. ”

Paul Curtis from the Cornell Wildlife Extension contributed, “Yes it looks like vole damage to me also.  The photo shows heavy ground cover in the rows near the vines.  That could facilitate a population increase of voles, and the vines were an easy meal under the protection of snow cover…If all the damage was below the snow line, then voles are most likely.  It will be important to remove any cover within and between rows that might harbor voles.”

Taking the recommendation under advisement Rob McDowell of Purple Gate Vineyard, Plattsburgh, NY wrote, “I also had a surprising amount of similar damage. The common factors seemed to be heavy ground cover and deep snow. I can deal with eliminating the ground cover, but as the snow is beyond my control, baiting may be the only option “

Aside from wrapping vines with mesh wire, plastic tape, or painting them with a repellent impregnated latex, mouse baiting with poison seemed to be the  regularly suggested control.  This seems problematic if a healthy raptor population is a concern, or if vineyard neighborhood pets have the potential to ingest loaded prey. Given the sporadic nature of the damage, where vines on their highways were pressured, but ones next over on a trellis untouched, I wonder how often the voles would find and take the bait. Kevin Iungerman chimed in from retirement “…for those in New York, be wary of your use of mouse bait in vineyards; check product labels for very restrictive guidelines on use.”

Mark Hart of Mt. Ashwabay Vineyard had some practical input. “I have some very good vole habitat in my vineyard in northern Wisconsin — adjacent woods, taller ground cover, etc. I have had instances with complete girdling, but never quite to the extent on your vine. Usually it is a small number of vines every year. Reducing ground cover, post-harvest in the fall, will help. Mowing isn’t needed for other reasons at that time, so it is hard to get motivated for the effort. There are baits that work, but unless you saturate the edge area with bait stations, getting the bait in a spot that will get the voles before they find the vines is hit or miss.”

When I talked to a couple of landscape gardeners in the neighborhood, and told them my story, I got zero sympathy.  “Welcome to our world” was the response. It turns out that ornamental shrubs and the mulch that surrounds them means that intermittent and untimely death of a much loved plant is expected a part of the process. With that sober reminder, the knowledge that this was an extreme winter, and that voles run in a four year cycle of population boom, we hope that it will be some time before we see this kind of incident again.