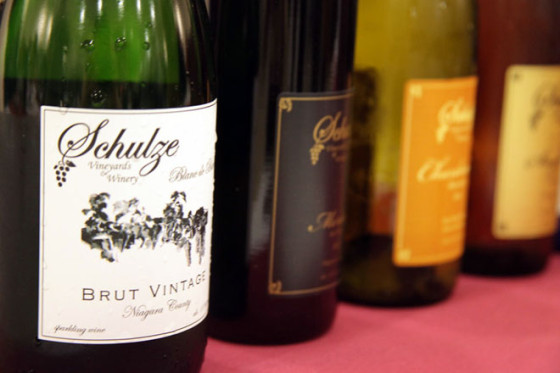 Wine’s ability to enable us to metaphorically travel through time and space just might allow me to grasp all that’s happened in the months (or years?) since I’d last been a regular contributor to the NYCR. As I look back through what resembles a hazy glass of unfiltered, sediment-laden chardonnay, there’s a lot I’ve missed or just never got around to verbalizing. This minor disconnect from the region left me wondering where to jump back in: An expansion of the official Niagara Wine Region Route? Or maybe a vintage report card which, after all is said and done, will just remind us that quality falls on the backs of individual growers?

After all the fuss and false starts, it took a spontaneous visit to Schulze Vineyards & Winery to reconnect me to the region.

Schulze is a bellwether for the progress of the region. Because it’s literally right around the corner from my house, a drive-by can reveal so many things. From the number of out-of-state plates or the size of the limo buses in the parking lot to the equipment being prepped on the crush pad, it’s a view into where we are in the season and in the region’s evolution. Part of that evolution of the winery itself was hiring Jonathan Oakes as a consulting winemaker, the guy I spontaneously met up there with a few weeks ago.

When Schulze first opened its doors in 2007, my wife and I had just moved here and I was as gung-ho as ever about learning everything I could about the region and the greater world of wine. Oftentimes my enthusiasm would spill over into their winery with open bottles from the previous night shared during their short lunch breaks or even in the vineyard. The winery’s explosive growth – largely helped by converting their juice-grape farm and our neighbors’ old vine concord vines into successful semi-sweet and sweet wine brands – has kept the family operation on its toes. Rain, sleet or snow, it has been non-stop winemaking as well as events and deliveries. These days I wouldn’t just drop in and hold up work because I have a few ounces of leftover Chinon to drink.

Owner Martin Schulze and his right-hand man Shaun joined us, and before I had a chance to pour anything I’d brought to show them, they offered to open their still-fermenting bubbly. Sparkling wine has always seemed to be the one creation that can get Martin to relax his often-analytical, perfection-obsessed nature enough to simply enjoy his own wine in the middle of a workday.

The winery had always used either vidal or their very rare Geisenheim-created Riesling-tweeked Siegfried grape for their base wine before recently supplementing with chardonnay grapes from outside the region. That day I was treated to both a Siegfried-based bubbly and a Chardonnay version. Siegfried can express itself through a confected apple flavor, which the winery usually frames in a dry and semi-dry still wine. When turned into bubbles, it loses some of that candied quality and takes on more mature notes of green apple and fresh baked bread.

The voluptuous stone-fruit-focused chardonnay bubbly we tried next may be the direction the winery will find itself heading thanks to last spring’s planting of chardonnay along with its first riesling vines. I’ve gotten the impression that their decision to expand their vineyard wasn’t so much a business decision as Schulze has pointed out that compared to the bulk of their production those vines wouldn’t be revenue generators anytime soon. Their sparkling production is small but meticulous, with the process being somewhat primitive compared to the more mass-produced wines.  Nevertheless, Schulze’s commitment to higher quality motivated the investment back into the vineyard where he has greater control.

The third sparkler was more of a mystery. Revealed as something they’ve been working on for a couple years, it offered much more floral aromas, an obvious touch of sweetness and a tank-carbonated feel that the winery uses with their native grapes. My mention of its similarities to Moscato d’Asti were met with relief. Turns out that was the intention all along. Using a Traminette-dominated blend to produce a mid-priced crowd pleaser would satisfy that growing Moscato market.

Quite honestly a comparison to Moscato doesn’t do the wine justice. After a round of laughter at the proposed Don-Ho inspired name it became relevant that marketing wasn’t a concern in the cellar. These men are going through the daily grind, day in and day out to make the best stuff possible no matter the grape, price or package.

A few moments of required tasting note transcribing led to the group sampling some of my homemade, whole-berry-skin-contact Siegfried I made from their grapes a few years back and the Chinon I opened the day before. After a few rare spirits, we opened up a beer from the lab’s collection and compared it to the Flanders Red beer Oakes had in tow. A few brett jokes later I was reconnected to what’s been in plain view since I arrived, and it’s not something the average visitor gets to see. It’s something that will make Schulze and the greater region stronger as it evolves. It drives these men to work their asses off on what feels like a never ending merry-go-round and it drives me to want to share the story with as many people I can.