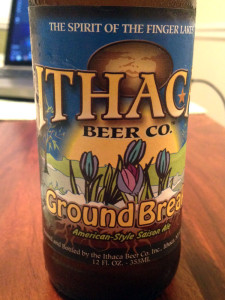 Ithaca Beer Company is one of my go-to brewers when I’m upstate (anywhere north of Westchester for us Long Islanders). They have a solid lineup, yet the brown ale and “Flower Power” IPA are always my favorites.

This saison pours a dark yellow to orange color with champagne-like froth. There’s more haze and sediment than I would have expected from an American Saison, although its European counterparts are well known for it. Whatever particles aren’t stuck to the bottom of the bottle slide happily into the bath of ale (it’s ok, yeast is packed with vitamin B and B12).

The nose shows ripe banana and grassy aromas typically associated with this style, but was lacking a definitive saison character.  The heavy dose of Amarillo, Crystal and Glacier hops dominate the nose, hence the distinguishing “American Saison.” It made me miss the funk and producer-variation of a good Belgian farmhouse Saison.

After taking a few sips, my disdain for this “imitation Saison” is quelled. The palate is lively with carbonation, but with a smooth malty backbone. Fresh orange is complimented by a toasted biscuit and a bitterness that falls right in the middle of your tongue.

As wine is my other beverage of choice, I eventually noticed a strong tannic structure. Halfway through the beer, the scratchy mouthfeel and slight astringency gave it away. I had to do a little reading to make sure there actually were tannins in beer. Some consider tannin in beer a flaw, but in certain styles it is befitting. Such is the case with Ground Break.

It was good on its own, but excelled with food. I’m usually not a stickler for beer and food pairing, except that they should always be paired. This beer made me think twice about that. Its’ lightness would make it drinkable with a grilled whitefish, but its’ sharpness would allow it to cut through a fatty pork chop as well.

My comparison to a Belgian beer is unfounded in that we are not in Belgium. I think it’s awesome for a brewery to not try to replicate a style exactly, but rather tweak it in ways that can make it your own. We’ll never have exactly the same conditions that a European brewery would, to which we owe the multitude of styles and tastes in beer.