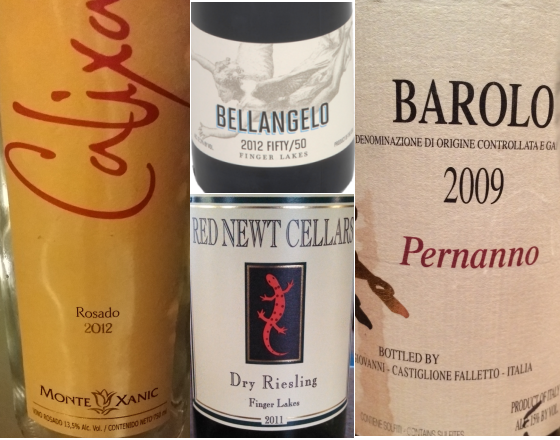 Lindsay Prichard, Finger Lake Correspondent: Bellangelo 2010 Fifty/50
As Memorial Day was winding down on Monday night, I decided to check the wine cellar to find a wine that would pair well with the latest History Channel mini-series that I had planned to watch. With the prospect of work the next day, I decided to pull an easy-drinking white. I had a few candidates in mind, but settled on the 2012 Fifty/50 from Villa Bellangelo. Although I had tasted several of Bellangelo’s wines, I had never tried this particular one.

Fifty/50 is a blend of 50% Riesling and 50% Gewurztraminer with Riesling grapes sourced from Morris Vineyards and Gewurz sourced from Gibson Vineyards. I respect both growers and enjoy both grapes as single varietal wines, so I was anxious to give the wine a try. After some additional chilling, I opened the bottle and poured a glass. The initial aromas were dominated by floral and perfumed notes indicating the noticeable presence of the Gewurz. But there were also some subtle citrus and honey scents that hinted at the existence of some amount of Riesling.

The sweet fruit and spicy flavors of Gewurz were prominent in the first few moments of each taste. But both were quickly replaced by the grapefruit-citrus flavors of a dry Riesling. That overt dichotomy became less pronounced as the wine warmed and opened. But I found myself waiting expectantly for the transition to take place with each sip, which became a bit distracting.

Overall, Fifty/50 is a well-executed wine, but somewhat confusing at the same time. You can call me old-fashioned, but I would prefer a single-varietal Gewurz or Riesling over a blend of competing aromas and flavors. But if you haven’t tried Fifty/50 and enjoy trying something new, give it a try and decide for yourself.

Michael Gorton, Jr., Long Island Correspondent: Monte Xanic Calxia Rosado
It’s rose season. Even in Mexico.  Spending ten days in Mexico drinking cerveza can be tiring. There are only so many Dos XX one can drink no matter what the most interesting man in the world says. While there I usually cook a few times. One night I decide to butterfly a few chicken’s. What goes better with grilled chicken in the Caribbean.  Nothing but some Mexican Rose.

From the Baja area of Mexico on the west coast is the famed Valle de Guadalupe where this wine is from. I have had wines from there before, but where I visit on the Yucatan,  there isn’t much selection. This year I was pleasantly surprised to see a lot more Mexican wines in the supermarket.  I had to have this rose. Made from 100% Grenache it was bone dry, crisp and delicious.

A bit of funky-ness on the nose along with sour cherry, citrus, spice and earth it was inviting. The palate brought more of the same fruit but with a more red berry note. Hints of plum, garden herbs and black pepper also lingered. Super balanced and a 13.5% ABV that was well integrated made this bottle go rather quickly. Even if I was the only one drinking it.

Todd Trzaskos, Contributing Editor: Pernanno 2009 Barolo
My brother brought this bottle with him to our Memorial Day weekend, family gathering up on Lake Champlain. It was a nice treat because we’d both been to visit Adam Japko in Carlisle, MA for one of his famous home blind tastings, the weekend prior. That particular event had offered up a flight of seven Schiavenza Barolo from vintages ranging between 1949 – 1979. The youngest two still showed some primary fruit while older ones had passed into more oxidative or volatile states of being. The ’49 though lacking any reminiscence of Nebbiolo, still had a delicate tawny port balance.

We did have a 2010 from another producer that evening at Adam’s, that as a counter point to the rest, was obviously still too young.  So where is the sweet spot on the Barolo aging curve?  Where is prime and how much does that change by producer and plot?  Probably need to attend a Barolo Boot camp with Levi Dalton to know where it is most sensible to spend your hard earned Lira, err, Euros.

The 2009 Pernanno still had youth but was rounding it’s harder edges into sour cherry and spice with a hint of licorice… plum skin tannin mingles with the French oak which shows itself into a long finish.  Delicate in weight, even at 15% ABV, there is a subtle density and extraction that is quite intriguing.  How long would it last if cellared properly, who knows?  My take away, until I am better schooled, is to buy young as you can, hold and enjoy after a few years, and to only expect an experience in old age.

Paul Zorovich, Finger Lake Correspondent: Red Newt 2011 Dry Riesling
While the name says “dry”, the back label says “off-dry”. No matter, it’s a terrific balanced Riesling from what has turned out to be a pretty good year for Finger Lakes Rieslings. Nice acidity and fruit with just enough minerality to remind you that it’s supposed to be there.

Katie Pizzuto, Art Director: Domaine Paul Blanck 2012 Riesling
Domaine Paul Blanck (Alsace) makes a beautiful, lithe, dry Riesling that I have been in love with for years. It’s imported by Michael Skurnik, whom I trust so implicitly with wine choices that I would blindly buy a wine I know is imported by him with no hesitation. The 2012 has beautiful citrus notes, tons of minerality and a backbone that would do any posture teacher proud, especially for what is considered his “entry-level” (Classique) bottling. It’s naturally fermented which really lets the character of the grape unveil itself, giving off floral hints on the back end. This could easily be laid down for 5 or 10 years but patience simply isn’t one of my virtues.

This is my go-to wine if I am trying to make folks understand that not all Riesling is sweet. Often, if I am pouring at an event, I get women coming up and asking me if I have any pinot grigio (which I never do). When I offer them this beautiful Riesling the reply is always “Oh no, I hate Riesling, it’s way too sweet for me.” That’s when I get the chance to educate a little bit and turn them on to something new…make them understand that there are Rieslings out there that are bone dry if that’s what they’re after. Not everyone is a willing guinea pig, but most who are, do see the grape and the wine in a whole new light.

Sometimes I get lazy. And I don’t want to walk downstairs.
When that happens, we play “CELLAR ROULETTE!”
One of my favorite games, as the name suggests, is to see what a friend picks randomly from the stacks leaving the decision totally out of my hands. (Well, not totally, since I bought it all.)

We played a round this Memorial Day Weekend and came up with this bottle. I was pleasantly surprised. This medium bodied Chenin Blanc from Loire Valley’s Anjou ended up being a perfect bottle to drink on the screened in porch under cover from a rain shower. Which works out because it’s a perfect way to describe this wine! Cloudy with concentrated fruit: melon & unripe apricot. Gracefully dancing across the mouth like the pitter-patter of raindrops overhead. A clean mineral finish reminiscent of the salt water bay in front of us. Transitional from spring to summer. 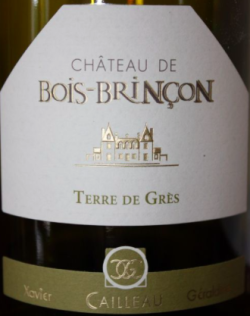