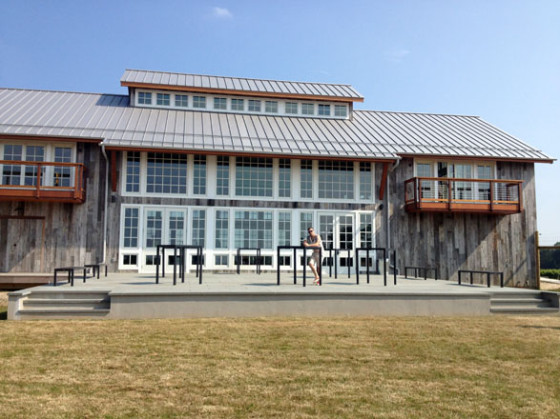 If you’re driving out from mid-Island, Greenport’s only winery seems like it’s located at the end of the earth. As you pass more familiar faces on the North Road (Hi Sparkling Pointe! What’s up, One Woman?), you wonder if you could possibly die from holding your bladder. Why couldn’t you just stop closer to the LIE?

Then you see it.

From the distance, Kontokosta Winery is a weathered grey structure: imposing and lonely on a windswept chunk of land that brings to mind the moors of the Scottish Highlands. After a quick jaunt down the dirt road, you start to cheer up as you pass rows of vines and pull into the only civilized parking lot of any winery on the East End.

Standing in front of the tasting room, taking in the red barn doors and distressed dove wood, you’re forced to look up. The facade screams RECLAIMED WOOD (it is) and your eye continues to rise up and up to the white picture windows. They climb all the way to the roof begging you to find out what’s on the other side. Take it all in. Rustic isn’t really the right world for this colossus that would be called ‘barn’ if it weren’t so sophisticated. It’s natural and pastoral in a very refined way. 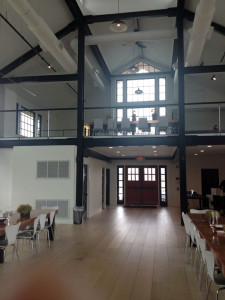 Inside, the décor, unfolds in light wide plank floors, gleaming copper tables, and endless ceilings flanked by framed windows. Black steel beams keep the space industrial even with the water views peeking out from the trees. The sum of these well thought out parts gives the allure of a boutique hotel. Not totally a surprise given owners Michael and Constantine Kontokosta are in the hospitality business with stakes in both the Harborfront Inn in Greenport and the newly re-opened Aquebogue Cove Place Inn.

And they’ve drawn upon these experiences to create the first LEED gold-certified winery on the North Fork, using that aforementioned reclaimed wood and recycled steel. They’ve also found a way to give you light everywhere you look.

At the back of the room sits the tasting bar, made from former wine barrels, now stained to a dark stone bringing you back to the point. It’s not just a lovely place that makes me want to have a second wedding out on the bluff with J Crew clad bridesmaids posing with Dionysus wreaths. 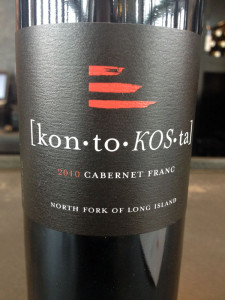 In 2002, under the direction of Ackerly Pond owner, Ray Blum, 23 acres of vinifera potpourri were planted: merlot, cabernet sauvignon, syrah, viognier, sauvignon blanc, riesling and cabernet franc (the most successful of the bottlings in my opinion.) Blum managed the vineyard until his death in 2007. The Kontokostas began bottling their own label in 2007. Lenz winemaker Eric Fry oversaw the first several vintages, however Gilles Martin (known for his work at Sparkling Pointe, but seems to be consulting at quite a few North Fork wineries) took over in 2012.

Kontokosta also sells olive oil and sodas and other confusing things wineries seem to do to make a buck, but all of that is secondary to the 62 acres of land that backs up to the Long Island Sound.

The combination of land and sea is stunning. Since Kontokosta opened their doors nearly a year ago (HAPPY BIRTHDAY), the tasting room has been filled with well-dressed day trippers who quickly get a splash of something cold in their glass and follow the trail to the edge of the earth to marvel at crashing waves. The vista reminds you why many of us fell in love with the “other fork” in the first place.

You should join them.

Kontokosta Winery is a sincerely beautiful spot with a very modern touch.  For better or worse, a blending of commerce, class and casks.  Stop by sometime.