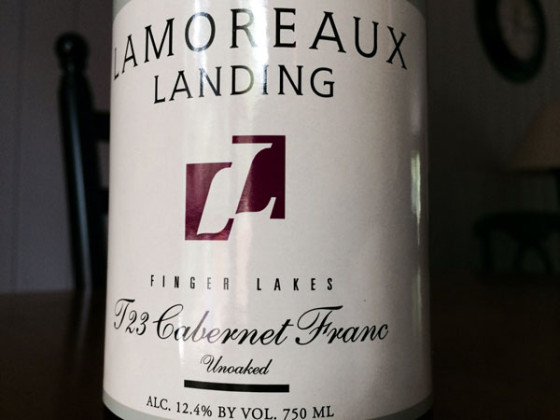 Red wine loves wood the way sunlight loves a hillside, the way Tarantino loves violence, the way feet love grass. One does not necessarily need the other, but can you imagine it another way?

At Lamoreaux Landing on Seneca Lake, they could indeed imagine it another way. Back in 2002, the winemaking team floated the idea of viticultural nudity. This would not be performance art in a 750-ml bottle. This would be an experiment to see what would happen if cabernet franc saw no oak barrels.

Today, the question of who gets the credit remains murky. Josh Wig, a co-owner, tells me only that “Mark approved the concept for the 2002 harvest with the intent of producing a fruit-forward wine.” He’s referring to founder and owner Mark Wagner. Was it Wagner’s idea? I don’t know, but at this point, it hardly matters.

Lamoreaux Landing created T23 Cabernet Franc, and since 2002, T23 is a wine that fearlessly shows what this variety looks, smells, and tastes like in the Finger Lakes. Is it the best cabernet franc in the region? No. But if you have ever wondered what the fruit is like without the adornment of wood, Lamoreaux Landing provides an answer.

No apologies, even in learner vintages.

The pinnacle to date is the outstanding 2012 T23. As previously discussed on NYCR, 2012 is one of the small handful of best vintages in the past generation. It’s the five-tool ballplayer with no weaknesses.

But the ripeness of the fruit might easily lead some winemakers to ramp up the wood contact. It’s hard to blame them. In many cases, the fruit can handle it. Oak can provide not only aroma and taste, but texture.

How fun, though, to see a 2012 red wine in the buff. There is no guessing about which aromatics come from the barrel, or which flavor components are born of the fruit. This is a cabernet franc solo act. Paul and Ringo and George have stayed home. Take it or leave it, but no need to imagine. This is pure stuff.

The T23 is not always so compelling. In some past vintages it has been rather thin, wispy, its ribs showing a bit. But is that so bad? Modern winemaking is capable of smudging out most flaws, but it can also produce homogeneity. Lamoreaux Landing is exercising trust with their customers to embrace each vintage, even if the wine is angular or two-dimensional. Wine is not all about hedonism. We abandon the intellectual pursuit at our peril. 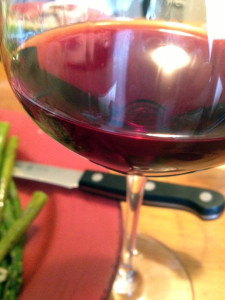 That’s why it’s so rewarding to pour the 2012 T23. The first five minutes, I thought it was a disaster. It was a muted mass, much darker in color than most years, but bereft of a nose. It was a singer using a microphone covered by a wet towel. That’s your warning. Give it a bit of air, because a short while later, it was a revelation. The soily, loamy tones were there, accompanied by the classic regional traits of cabernet franc: tobacco leaf, sage. Raspberry, but richer, more mulled and compote-like.

Wig says there is no hurry for this wine, which is available now for $20 a bottle.

“Originally, the idea was to have a red wine with lots of fruit to release and drink young,” Wig explains. “It turned out to be a wine that is a lot of fun to drink young because of the great fruit and smooth tannins. If you put some in your cellar and age it for four or five years, you can watch it evolve over that time period.”

Wagner reportedly still has a few bottles of the 2002 T23 kicking around. That would be a riveting pour.

Best I can tell, this is the only stainless-steel-only cabernet franc in the Finger Lakes. Wig points to Anthony Nappa doing the same on Long Island, but beyond that, he says you’d have to go to the Loire Valley. As mentors go, you won’t find a better one for cabernet franc.

And yet I don’t find myself wanting a wave of wineries to do the same. It would be interesting, certainly. Losing T23 would be a shame. Given the choice, I still prefer a cabernet franc with judicious oak deployment. But every year I look forward to T23, just to see. As in Hollywood, wine doesn’t need much nudity. Just enough keeps us turned on.