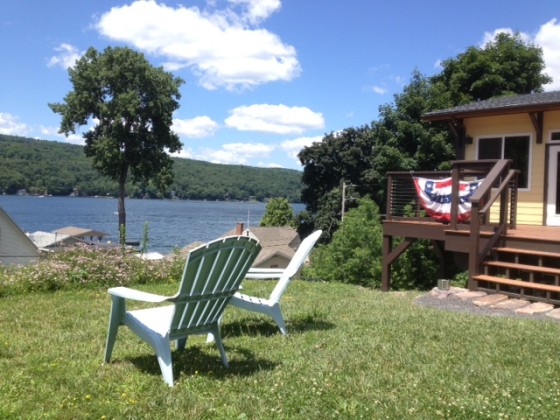 Gualala, California is a small ocean-side town in California, northwest of Napa. It’s home to the Surf Market, the coolest community grocery store in the country. And while the locals love it, it convinces tourists to make the drive from Napa Valley.

“Perhaps the closest thing to the perfect small town store,” is how Seth Olney describes it.

Olney is the owner of the Olney Place on Keuka Lake, and he knows something about what makes a store special. At the age of 34, Olney has developed his community store into the beating heart of the Finger Lakes. He’s traveled the country to find inspiration; a trip last winter took him up and down the west coast. He’s been to Florida. His customers have convinced him to go to Saxapahaw, North Carolina, where the Saxapahaw General Store is another gem for those in-the-know.

On a recent visit to the Olney Place – an annual visit to pick up The Rachel, the best sandwich in the region – I asked Olney if his store is the Oakville Grocery of the Finger Lakes. He appreciated the sentiment, but he explained the difference.

His recent west coast trip exposed him to some of the other stores that have become destinations. His list of secret-handshake-level stores includes the following:

So what sets aside the Olney Place? It’s more than just the location; the Olney Place is on the east side of Keuka Lake, not all the way down to the bluff. Katie, a 30-something from Rochester, stood in line next to me while waiting for a sandwich. She offered this astute take: “When we’d come down to the Finger Lakes in the past, it was hit-and-miss with just about everything. Wineries, food, stores. Now there’s a lot more hit than miss, and this store is a big part of that.”

It’s more than just the fact that there’s no other store that is even passable in the Penn Yan area (sorry, Tops). It starts with the fact that somehow, Seth Olney seems to know everyone who comes into his store. “We like to say that when you’re the only place in 20 miles with toilet paper, you get to know everyone’s shit,” he deadpanned.

And there’s a lot more.

On Thursday night, Olney Place opened its new tap room. They ordered seven dozen glasses for the occasion, but the crowd forced them into emergency glassware in just two hours. The tap room offers twelve beers on tap; visitors can get small tastes, full pours, or growler refills. Selection will depend on the season, and will constantly change. And Olney will stock dozens of craft cans in the store. 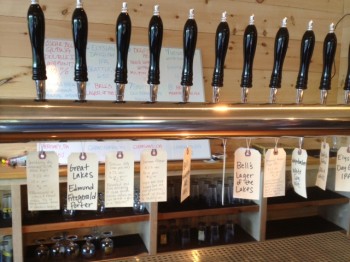 During my visit, on a scorching summer day, Olney poured us his variation of a “summer shandy,” combining fresh lemonade over a summer wheat beer. It’s a form of “cock’d ale,” aiming to bring more refreshing, lower alcohol drinks to customers (and especially women). Olney picked up the idea during a trip to the Boonville Beer Festival in California’s Anderson Valley. He asked what everyone was drinking.

The answer was a “migosa,” a take on the classic mimosa. This one had orange juice and gose-style beer. Seth loved the idea, and came home ready to experiment with summer offerings at the Olney Place.

“We know that people who love beer will be here,” he said. “But we want to make it more palatable to everyone. Who doesn’t love a beer spritzer on a hot day?”

“Total collaborative effort”
You discover just how many people are regulars at the Olney Place when you find out how the new tap room and bar came together.

Olney had the bar and countertops already; he found milled lumber that his grandfather had stored 40 years ago. And then the community filled in the rest.

Sam Castner, a local artist, donated an old metal pipe that became the bar’s foot rail. A friend in the construction trade offered higher-end lumber for a relative song. A retired local cabinet maker came out of retirement to build the bar.

Now it just needs a name. 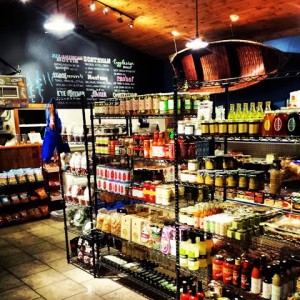 “I still have no idea what we’re calling it,” Olney said with a laugh. “But this was a total collaborative effort. If it takes a village to raise a child, it definitely takes a community to build a business.”

Interesting products
In his early days of running the business, Olney wasn’t selling many tomatoes. Someone suggested San Marzanos, so he stocked them. The first order sold out almost immediately.

“That was certainly a surprise,” he said. “It just reminds you that you have to listen to your clientele.”

That’s why Olney sells seaweed chips, artisan crackers, coconut waters, and gourmet sodas. Every week he seems to add new products that cater to the snow birds. But he also makes sure the locals feel like the Olney Place is their store.

A personal touch
The specialty sandwiches are named after local customers and friends, and you’ll often see Olney dashing down to the lake to offer boat service. The Olney Place has a dock and sells gasoline, but Olney wants boat traffic to target his store for more than just fuel. Boaters can call in orders, picking up groceries, beer, and lunch. During the summer, Olney wants lake dwellers to know they don’t have to leave the water.

When Seth returned from a trip down to assist customers on the lake, he was smiling. Two more cars had pulled into the parking lot. “I have no idea who those people are,” he said. “I usually know everybody. Lately, I’m seeing more and more new people.”

Perhaps most importantly, Seth Olney is not a schmoozer or bullshitter. That’s not to say that he doesn’t know how to entertain his customers. But he is the genuine article, a champion of the Finger Lakes who has poured his own money into this business. It relies on a seasonal surge just to survive. He has no wife, no children. “You’re looking at my kids,” he said, pointing to the store.

We finished our visit outside, sitting with a wide view of the lake. “I’ll probably never be satisfied,” he said. “There’s always more to be done. I want the store to be a celebration of lake life. I want to build a subculture while trying to direct the energy of the community beyond just the shoreline.”

Then he jumped up and headed for the front of the store. Another pair of new faces had come in, and Seth Olney wanted to know their names.