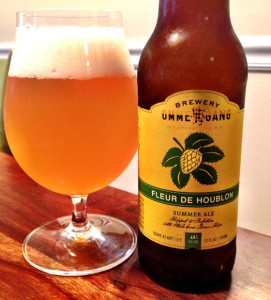 The Fleur De Houblon (hop flower ale) from Brewery Ommegang in Cooperstown, NY has been my favorite “summer ale” this season. Albeit not my preferred style of beer, summer ales are ubiquitous this time of year. Many of these ales eventually find my gullet out of pure thirst, oppressive heat and/or lack of a better choice. I like this beer because it isn’t limpid, over-carbonated, and shows more complexity than any other offering in its class.

Poured gently to not disturb the yeast sediment, the ale glows a bright yellow-gold color with a pearl frothy head. Whole-cone Bravo hops (featured on the front label) show fresh apricot, lemon, and lilac on the nose. There’s also a familiar yeast aroma I associate with this brewery. It has an under-ripe banana aroma that I notice in a lot of Belgians, but more distinct.

Ommegang actually use a “house yeast” that’s undoubtedly Belgian in origin. I learned on their brewery tour that the yeast is actually vacuumed off the top of the fermented beer, dehydrated, and re-pitched in the next batch. This practice ensures consistency in their beer and establishes a house flavor.

If I had tasted this beer blind, I would have nailed it for a Saison. It tastes like orange, grass, and cream put in a blender and garnished with a dash of black pepper and clove. The fruitiness and slightly tart, acidic finish make the classification “summer beer” appropriate. The spiciness and prevalent hop flavors make it a “good summer beer”.

Alongside food, this beer really sings.  I enjoyed it with asparagus (wine-pairing nightmare) and Chicken Francese. We also had a bottle of white Burgundy at the table, and the beer pummeled the wine as far as pairings go. The 6.7% ABV and cleansing carbonation makes Fleur De Houblon a perfect companion to any dish with some cream or butter added.

I liked this beer so much, I’m not even calling it summer ale anymore.