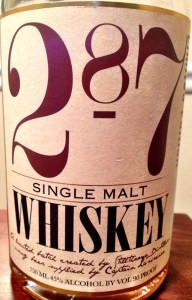 Recently on a trip to Empire State Cellars, where I always check out the New York spirits, I picked up the recently released 287 Single Malt Whiskey.  The whiskey is a collaboration between StillTheOne Distillery in Port Chester, NY and Captain Lawrence Brewing Company just about 11 miles down highway 287.  The spirit was distilled from Captain Lawrence’s “Freshchester Pale Ale,” aged for about one year in new American Oak, and was bottled last month.

According to the distillery’s website, this is a limited quantity “First Taste” edition with Master Distiller, Ed Tiedge’s signature on each bottle.  I hope the limited edition bottling means that most of that spirit is still resting quietly in Oak until it will make a triumphant return after it’s matured longer.

This project is similar to what Long Island Spirits has been doing with Blue Point Brewery for the “Pine Barrens” whiskey for some time, yet the products are vastly different.

At just a year old, the 287 shows its’ roughness and heat, but definitely boasts ample character and complexity. 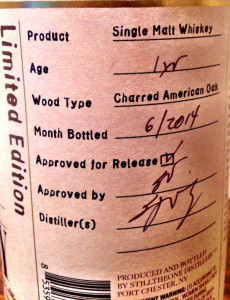 On the nose it shows a load of citrus blossom, orange peel and is quite malty – even beery underneath. The powerful alcohol sensation is quieted with a splash of water and opens up with some sandalwood, clove and hops (not something you usually smell in a whiskey).

The palate is malt driven all the way. Caramel and charred oak flavors mask some of the edginess on the tongue. It’s still pretty harsh, but with some more time in barrel and bottle, I think this will be a serious contender in the New York spirit world.

At around $55 for a 750 ml bottle, it isn’t cheap, but is priced relative to the rest of the spirits made in the state.

StillTheOne is perhaps best known for its Comb Vodka which is distilled entirely from honey wine or mead. Their dedication to quality ingredients and meticulous distilling practices puts them up there with Hillrock Estate Distillery and Finger Lakes Distilling (Mckenzie Whiskey)both in New York.

If you get a chance check out StillTheOne’s website which is really well done and fun to peruse if you’re a beverage nerd like me.