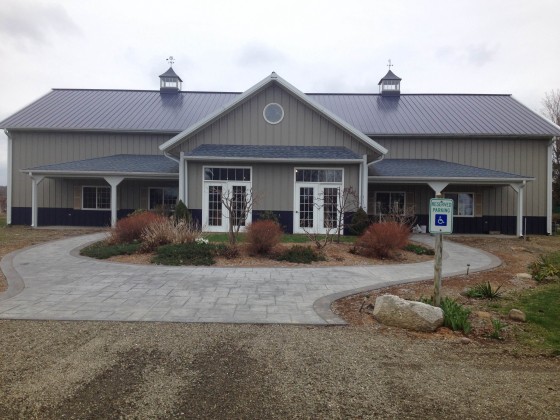 Chautauqua County has been known as the one of the best places in the world to grow concord grapes for generations. That is why many family farms have been growing grapes there for well over one hundred years. Some farms that started growing mostly Concord and native grape varieties over time added vinifera grapes to their fields to sell to home winemakers. Recently, the region has seen an increase production of vinifera grapes and received acclaim for its success in growing them. These small blocks have grown into acres and acres of vinifera grapes that supply a burgeoning winemaking scene in Lake Erie.

Gary Burmaster is a fifth generation grape farmer whose family has been growing grapes in Chautauqua County since the 1860s. Gary’s great grandfather, Sheldon “Rufus” Butler began the farm by planting seven acres of concord grapes. He was also a winemaker and listed in 1891 Directory of Grape Growers, Winemakers and Distillers of California and of the Principal Grape Growers and Winemakers of the Eastern United States published by the Board of State Viticultural Commissioners of California. Until the mid-1960s, the family farm supplied concord and other native grapes to venerable jam and juice producers such as Welch’s. In the mid-1960s, the family began growing vinifera grapes to supply the growing winemaking industry. It wasn’t until Gary was ready to retire as a full-time farmer that the family went from growing vinifera grapes to making wine in their own winery.

Along with his wife, Pam, and daughter, Beth, the Burmaster family opened Liberty Vineyards & Winery in 2008. Liberty Vineyards grows 80% of the grapes it uses in wine production, both vinifiera and native. Syrah, riesling, diamond, Minnesota hybrids and catawba are all grown on Liberty’s property with other grapes coming from producers within a 10-mile radius. The winery sources varieties such as traminette, marquette, vidal and noiret.

The Burmasters chose to open their winery at the urging of their daughter, Beth. She obtained a Masters in Business Administration in Marketing from St. Bonaventure University and created the business plan for the winery as her master’s thesis. When her father began speaking about retiring, the idea of opening a winery by building on the family’s vast experience in grape growing seemed like the logical progression. In 2007 they started creating wine on a commercial scale and released the vintage in 2008 when the winery opened.

Gary believes their success with growing grapes throughout the generations comes from the unique characteristics of their property. Their soil composition which contains high levels of gravel, its close proximity to Lake Erie and the openness of the farm which promotes good air drainage are all contributing factors to grape growing. Gary also pointed out that due to the proximity to the lake itself the entire region has the potential to create great wines. Typically the lake keeps the vineyards warmer than locations further inland, helps prevent the harsh spring frosts which plague other regions and provides a longer, warmer Autumn that aides in ripening.

With Bob Green, the Burmasters’ winemaking consultant, they have taken a hobby of home winemaking and turned it into a business that produces a line over twenty wines from sweet to dry, using both vinifera and native grape varities.

Liberty Vineyard’s biggest seller is a sweet wine entitled “Reds, Whites & Blues” made from various native varieties. Liberty also makes wine from some vinifera grapes not seen frequently in New York such as pinot grigio, syrah and carmenere. On my recent visit to Liberty Vineyards, the chardonnay, syrah and carmenere were all showing very well, displaying the unique terrior of Lake Erie providing more mineral composition than seen when grown in other regions.

The Burmasters see a bright future for Lake Erie as a winemaking region. With the interest in vinifera wines growing in the region and with the juice market flooded, Gary thinks more grape growers will experiment with vinifera, improving the quality of the grapes sourced to local wineries. This will improve the quality of the wines being made and fostering a bright future for the region.