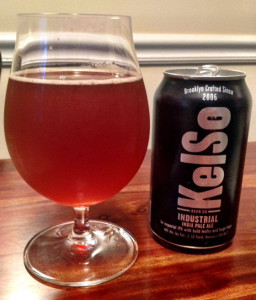 I bought this beer not knowing if I would really like it. Imperial IPAs are often overblown, out of balance and hard to drink. There are always a few solid go-to selections and Brooklyn Brewery’s Brooklyn Blast is the first that comes to mind.

When done well, the style can be excellent and mouth-filling. They’re best alongside hearty meat dishes like pork shoulder or short ribs. I equate them to the California Cabs of the beer world. That being said, I’m rarely eating short ribs while I drink these beers so I appreciate a balance and quaffability in them as well. Kelso’s house-style is usually geared towards a more drinkable style of beer and it shows in their Industrial IPA.

For an Imperial IPA, the brewer must use a serious amount of malt to provide the yeast with enough sugars to ferment the ale up to 10%ABV. To counterbalance the maltiness, he must then add a serious amount of hops to bring the beer up to 100 IBUS (for people that don’t know the International Bittering scale that’s really high). Thus, it takes almost double the ingredients to produce this powerful style as compared to normal ale around 5%ABV.

Kelso’s Industrial IPA is a reddish brown with no head and just a tickle of lacing. The hops provide a load of grapefruit and pine on the nose while the malt shows as candied sugar and maple syrup – both vying for attention. Just as the palate seems malt-driven and overpowered, the long bitter finish of the beer takes over. In between are flavors of wheatgrass, more grapefruit, and weirdly…raisin bread.

When I look for a balance in most styles of beer, like an IPA for example, you look for the flavors to be in harmony with one another. What I’ve realized about Imperial IPAs is that hops and malt will never be in harmony. There’s just too much stuff floating around in the glass. Instead, the flavors fight for attention like pre-pubescent twin boys, with neither ever winning. And I guess you can call that balance.