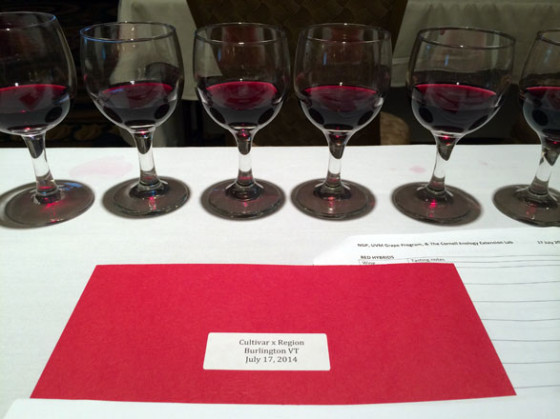 Harvest is closing in fast and winery tasks are in high gear, whether it be crush pad prep or the bottling of last year’s vintages. From large producers to little amateur outfits like our own, the story is the same as one season rolls quickly into the next, and what comes in through one door must pass out another and make room in between. While I was bench testing blends for the 2013 whites, I got to thinking about a very interesting and informative cold-climate tasting from earlier this summer, when it seemed like we still had all the time in the world.

A couple of dozen local wine producers and advocates from around the Lake Champlain Valley convened in Burlington, VT for a “Cultivar X Region” tasting sponsored by the Northern Grape Project and coordinated by the University of Vermont Grape Program and the Cornell Enology Extension Lab. Several flights of experimental wines were lined up to include five grape varieties sourced from five different sites, tested with several selections of yeast during fermentation. As far as we know this was the first formal comparative tasting of its kind in the region, and it certainly piqued interest in having more like it.

Most of the plots where these grapes were grown are products of the NE 1020 Project which helped fund the planting of cold hardy trial vineyards: University of Vermont, University of Minnesota, and in New York at Geneva in the Finger Lakes, Willsboro in the Lake Champlain Valley, and Clayton in the Thousand Islands of the St. Lawrence river. The grapes were fermented according to a standard protocol at Cornell and in Minnesota, and I felt quite fortunate to be able to see the variations side by side, while tasting alongside a number of folks who are pioneers with these grapes. The format was single blind, so we knew what the variety was, but not where from, nor what kind of yeast was employed.

Terry Bradshaw from UVM opened with a situation introduction and orientation, and I’m grateful that he and his UVM crew were able to host us in what turned out to be a great central location. Tim Martinson, Senior Cornell Extension Associate, and Northern Grapes Project leader offered a few minutes of explanation about the background of the NE1020 and the Northern Grape Project and made the important point that this tasting was a milestone of sorts, the actual fruition of those first experimental plantings years ago. Anna Katherine Mansfield and Christopher Gerling led the tasting flights and were responsible for the big reveal after all of us had handed in our assessment sheets, ranking the flight of wines in order of preference. Anna and Chris are a dynamic duo and I’ve consistently been both educated and entertained by their presentations, and this time was no exception. Each tasting round offered one variety from two or three sites using two or three different yeasts. We had a few minutes to take notes and rank our selections before we handed in the data sheets and were then allowed to discuss what we had tasted and the identities of the wines were revealed.

We passed through a white flight of Prairie Star, and two more of La Crescent before moving on to a few red flights of Frontenac, Marquette and St. Croix. These were all grapes that I was familiar with, so novelty was not a factor, and maybe that’s why the aspect of site seemed to show through so clearly. Maybe it was the conditioning of cellar palate…I’ve been making cold hardy wines from the Baker Farm trial for several years now. Maybe it was the company. Lindsay Pashow the field tech at Willboro was there and had asked me to sit with her. We are waiting on the full tabular data from the event to be distributed, but based on my notes, I had a freaky experience over several flights of wine. I consistently chose the Willsboro trial wines as my most preferred, as #1 and #2 each time except for the very first flight of Prairie Star where preference followed the yeast selections and the Willsboro wines came in #1 and #3.

I’m not saying that I recognized the wines as “Willsboro”, but I do know that they appealed to me more than the others. There was a distinct brightness and clarity to the flavor profiles of the Willsboro wines, which did not come through in the other New York sites, while the UMN wines leaned towards the vegetal and slightly reductive. The Baker Farm vineyard in Willsboro, really is an excellent site for wine growing, and I have to believe that the strength of the location had a direct impact on the fruit quality and resulting wines.

Lab-made wines are a little funny to sample because they have not been made to extract the finest possible product from the process, but rather, they all are treated with the same wine making tasks and parameters, in order to isolate the variance that comes with intuitive human touch. Lab wines are not generally quaffable, and while this year’s batch had followed the same production rules as in previous years, I did comment that the wines are getting better and approached commercial quality in several cases. The wine labs themselves may be maturing and subtly raising the bar, but that compliment would suggest that there is some change in consistency and the scientists might not like that.  So I’m going to stick with the site and say that as the vineyard grows up, so grows a quality that is distinct enough to taste.