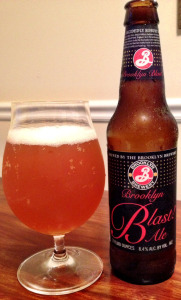 I first tried “Brooklyn Blast” ale at the Brooklyn Brewery tasting room in Williamsburg some years ago. I immediately fell in love. At the time, the beer was only available on draft and was not something often found outside of Brooklyn. It stuck in my mind as one of those powerful beers that just feels good to drink. It also happened to be the night of the “Pig and Pickle” event, where pulled pork slathered with hot sauce was served alongside the sourest pickles I’ve ever had. The ale, touted as a “rambunctious IPA” by the producer, seemed to cut through these particularly strong flavors and became the star of Brooklyn’s lineup in my eyes.

Now, it’s available in bottle and is distributed more widely.

The strong ale is an electric copper-orange color when poured, with thin white foam and lacing covering the beer. Obvious as a poisonous snake, the intense color of the beer serves as fair warning that you’ll be in for some serious flavor.

The nose is layered with a dusty note over aromas of white balsamic, lemon peel, and cooked barley. The alcohol is present but not overly so. There’s so much going on in the beer that the 8.4% just boosts the aroma profile. I would pin it for a barleywine, yet it’s much more complex and a bit mellower. The 11 different varieties of hops used may have had something to do with this wild-smelling beer.

The taste of the ale is also complex and cohesive. Neither types of malt fight for attention and are great vehicles for the resinous hops. Brooklyn Brewery’s beer have always had a British flair to them which started making sense to me after reading their brewmaster’s book and finding out he spent some of his transformative years living in the UK. Those warm toasty, biscuit flavors preside much like in English ale. Where the ale really gets fun is when the brewer also tosses some new world hops into the equation and boost the fruit character of the beer. The citrus peel quality on the palate adds a tartness/freshness to the beer. The finish seems to go on forever but doesn’t leave any serious bitterness on the tongue.

It can be difficult translating flavors into words, especially as taste is so subjective. When I first started tasting wine, I would ask “What the hell does round or green taste like”? Then after tasting and tasting and tasting, you start to get it. When I taste a great wine with great length, the word linear often comes to mind. It’s like blending harmonious flavors with good structure and body with none overpowering the other. It drinks very easily but not without enjoyment or contemplation. It is soft but carries on in your mouth for several minutes. That is what I get in this beer, a linear experience.