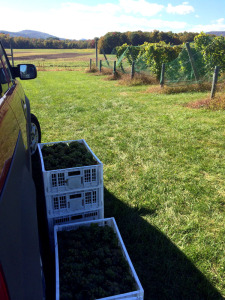 2014 was what most vacationers would describe as a pretty ideal summer and subsequent transition into autumn. Crop load in the north country has been good on those plants that had healthy wood after the bone-chilling winter. The season was marked by beautiful clear days and sporadic rains when we needed them.  It was good sleeping weather at night and it never really got too hot which was great for camping but a bit of a challenge for the grapes.  Sugar levels were behind and  worked their way up, but slow grape maturity had been holding pH readings low and Titratable Acidity (TA) high, giving pause to more than one harvest party.

Warm weather plays an important role in both the accumulation of sugar and the degradation of acids in fruit over the course of the vineyard season.  The value of that warmth is quantified in the concept of Growing Degree Days, which is an accumulation of the average daily temperate minus a target temperature for each day between a start and end point.  Grape degree days are mapped using the Winkler Scale with a start date of April 1, an end date of October 31, and a target temperature of 50 F — the temperature below which grape vine growth activity ceases.  So on a day with a high temp of  76F and a low temp of 54F the average would be 65F.  Subtract 50F from 65F and you get 15 growing degrees for that particular day. Given that cold climate grapes need around 2250+ GDD in order to ripen, you can see how it would take a while for those rays of sun to add up. It turns out that we actually gain more degrees than Reims in Champagne and Dijon in Burgundy, so we could grow Pinot Noir and Chardonnay in the North Country!
Not. The heating degree model does not take -30F days into consideration.

There is a common notion that a significant diurnal shift between the high temperature of the day and the coolest nighttime reading helps to promote grape maturation in a favorable way. In places where heat is abundant, those cool nights might actually help by slowing things down to a pace that allows full phenolic ripening. In these parts, we have a short season within which to accumulate those heating units and we need every one we can get. When we spent nights snuggled in sleeping bags this past summer, the vines hunkered down as well, and that slowed their development. So, winemakers had to make the decision to either pick at numbers that were a bit less than optimal, or to let them stay on the vine, and roll with the risks of yellow jacket invasions or from late season rains.

Based on the responses we got from the upper Hudson Valley, Champlain Valley and Thousand Islands, the story was much the same. Acidity was still pronounced and they were going to let things hang as long as possible and only pick earlier if fruit was in danger of going-by. That gamble definitely paid off the patient in the form of extra heat accumulation through the autumn. At this point, everything but the ice wines should be in the barn. Once senescence occurs, and leaves fall away, photosynthetic action is done for the year, and fruit ripening has completed its process.

The summer may have been cool, but support for cold-climate wine growing just recently saw a warming trend.  It was announced that the Northern Grapes Project had its recent grant application approved.  After a gap year in program funding,  finance and planning relief has arrived in the form of a $2.6 million influx from the Specialty Crop Research Initiative which itself is funded through the USDA via the Farm Bill. Given that the entire Specialty Crop grant pool was just shy of $77 million, cold climate grapes got a healthy 3.5% chunk of those monies in order to support research and education efforts over the next two years.

The funding will help with programs like the popular webinar series that the Northern Grape Project offers to viticulturists and wine makers over the winter months. It will be back on schedule starting November 20th delivering “Trellis Design and Construction and Pruning Fundamentals Prior to Your First Cut” with Steve Lerch, Cornell University and Mike White, Iowa State University. Each webinar runs once at noon and again at 7PM EST, and I’ll definitely be registering to participate.

Several of us are hoping that there will also be continued assistance for the Cornell Baker Farm Trial which ran on a shoestring this past year.  The future of the vineyard is uncertain and a process is under way to determine what role, if any, it should have in efforts to support prospective and existing growers in the Champlain Valley of New York and beyond.  This Thursday there will be a vineyard tour in Willsboro and then a dinner and North Country Grape Industry Advisory Board meeting at the Whallonsburg Grange.  Interested parties are invited to attend and discuss what the region needs from the cooperative extension, and how the trial vineyard might fit into a framework of continuing education.

I’m planning to attend and hope to see some of you there.  I’ve just racked some La Crescent, Marechal Foch, and Louise Swenson from the Baker Farm 2014 harvest and will bring some wine from previous years to the event.  If you can’t attend but have thoughts, suggestions or memories about the Willsboro trial, please share them and we would be glad to bring them along.