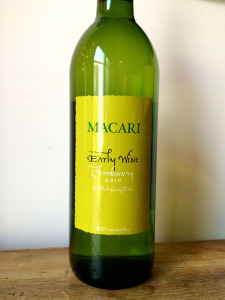 The release of very few Long Island wines can match the buzz generated when Macari Vineyards releases their “Early Wine” Chardonnay each fall, right after harvest winds down. It’s always the first wine from the new vintage to hit store shelves, serving as a harbiger for Thanksgiving as well as the winter holidays.

You can think of it as Long Island’s Beaujolais Nouveau — except it’s delicious.

Originally inspired by the jungwein (young wine) of Macari’s consulting winemaker Helmut Gangl’s homeland, Austria — where they are often served in heuriger shortly after harvest — the grapes for this wine wine were picked on September 8. The wine was bottled on Halloween. And it was released on November 8.

Kelly Urbanik Koch has taken Gangl’s inspiration and made it her own since becoming Macari’s winemaker. “He showed me the ropes for Early my first year here but I guess you could say it’s my own interpretation now,” she told me recently.

Macari Vineyards 2014 “Early Wine” Chardonnay ($18) is as fresh and refreshing as any Early Wine I’ve tasted, but the acidity seems better incorporated; more a part of the wine as a whole.

Green apple, juicy pear, jasmine tea, lime and grapefruit aromas lead into a light bodied, juicy palate that bursts with pear and apple flavors. There is a subtle sweetness here but the crisp, juicy acidity provides impeccable balance. There is a slight oily texture on the mid-palate that really adds to the overall mouthfeel.

This is exactly what wines of this style should be — fruity, straightforward and absolutely delicious. Don’t look for layers upon layers of nuanced flavors. Drink it — maybe with Thanksgiving dinner next week — and enjoy it with friends and food. Buy at least a half case. You’re going to need it.