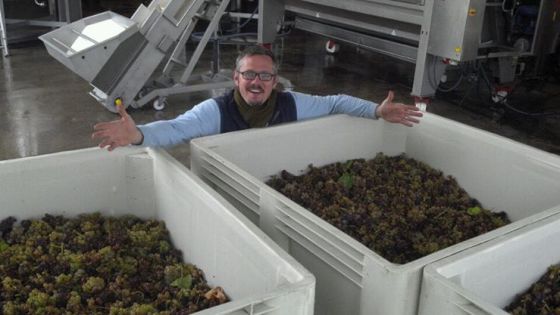 In June, the head job was his. By the end of August, he might have been wondering why nature had served him such a cruel dish for his first solo vintage.

But at Anthony Road Wine Company on Seneca Lake, Peter Becraft knew very well to stay patient. He could wait to see what September would bring. He had been waiting years for the chance at a head winemaking job, and he is not the type to stew.

That’s probably framing the situation unfairly. Anthony Road has become one of the most significant names in the New York wine industry, thanks in large part to the prolific efforts of longtime winemaker Johannes Reinhardt. Becraft worked alongside Reinhardt for six vintages as associate winemaker, and spent two years doing various jobs prior to that. The two men are very close, and while it was no secret that Becraft was the logical successor if Reinhardt ever opened his own operation, Becraft was not hoping his friend would leave.

“Humility is one of the biggest things I have learned from Johannes,” Becraft says. And he stresses that humility is just one of the lessons he has learned from the German who recently opened Kemmeter Wines, just across the road from ARWC.

Logically, that means we shouldn’t expect a big departure in style at Anthony Road. But there are clues that Becraft will be open to his own interpretation, with time. He’s an artist, and unlike some of his colleagues, he doesn’t recoil at equating wine with art.

“I like the term artist,” he says. “It’s in my background. I approach the cellar more like a studio than a laboratory. An artist is really a keen listener to his or her intuition.”

That doesn’t mean Becraft is solely a freelancer. “Developing (that approach) comes from hours and hours of practical experience,” he explains. “Attention to detail is so important. When your books fail you, all you have to rely on is your palate and intuition.”

Without overstating the point, Becraft’s approach seems perfectly suited for a region that is gaining more interest around the world with each vintage. He is dialed in to the technical side of winemaking. He learned from a German who is staggeringly skilled and thorough. But even Reinhardt has sought to try new things in recent years, working on a more regular basis with ambient yeast, for example.

And so Becraft is the winemaker with the technical background but also the artist’s thirst for creativity and individuality. Reinhardt spoke in recent years of the potential limitations of a Finger Lakes riesling’s “uniform.” He meant that there is a growing regional typicity, which is positive, but it can also be narrow. Becraft is a winemaker who brings a natural touch to his work. It’s hard to imagine his wines being too narrowly similar, all the time.

“He’s an intellectual, and he’s the right choice for that winery.”

Those are the first three comments I received when I asked some of his colleagues about Becraft’s talents and personality. And now that he’s running Anthony Road as the head winemaker, he’s happy to continue working with his predecessor.

“I see Johannes daily,” Becraft says. “He makes his wines in our cellar. He was there to support during the harvest when needed, and he’s always available when I have questions.”

But I wondered: Is there pressure to impress colleagues or Anthony Road customers by doing something radically different?

“I am not going to hijack the ship just to let everyone know I’m the one making executive decisions now,” he says. “I have learned everything I know about winemaking from Johannes. As a team we were very much of the same mindset, and there was not one wine that was bottled that did not get our unanimous approval beforehand. We both want to showcase the quality fruit grown on our site. I am not interested in making the wine something that it should not be.” 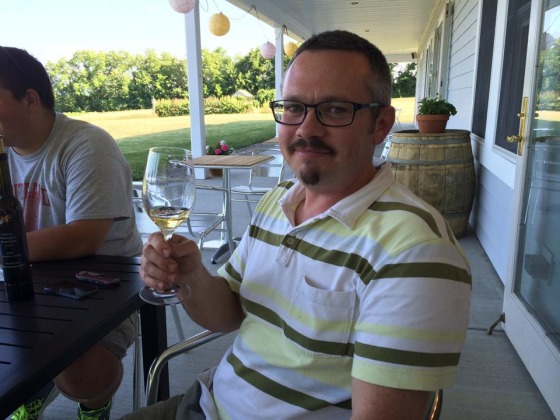 He adds, “There are some wines that have developed a following and I see no need to alter those wines in any major way. There is a style that is decisively Anthony Road, and I helped in that development.”

But no two winemakers are exactly alike. Becraft says, “In the end, there will be some differences, whether they are immediately perceptible or not. The wines are going through my filter now, and I have my own experiences to help dictate the direction they go.”

An early look at his first vintage as head winemaker
Remember that whole thing about patience? In June, Peter Becraft finally had a lead winemaking job. In September, he finally got the weather his fruit needed.

“September was a savior month,” he says. “What it did was allow the acids to drop to a very refreshing level without being too sharp and stinging. The sugars were still in the low range, but there was a greater balance.”

That’s just about the regional consensus. 2014 should offer wines that are true to cool-climate character, and if that used to be a pejorative, it’s not anymore.

But here, you might say we’ve buried the lead. Because even if 2014 had fallen apart, Peter Becraft’s world would remain rock solid, invigorating, and a world apart from his initial education. He touched on his art background, but that only offers a small part of the story. He was not going to be a winemaker, or anything of the sort. His education covered the arts, and his work took him the odd route of casting for fashion shoots in Manhattan. Happily, his colleagues at Anthony Road now share his story with customers: Peter Becraft was simply tasting wines at Anthony Road in 2006, and it was his wife, Cary, who elbowed her way into a barrel tasting with Johannes Reinhardt. The extroverted Cary all but volunteered Peter to pick grapes or work the bottling line, and Reinhardt was happy to have the extra help. Two years later, Becraft was a full-time assistant winemaker.

One day, one tasting, one major change in life. Peter and Cary might feel fortunate that the events unfolded this way. Anthony Road’s owners, John and Ann Martini, feel the same.