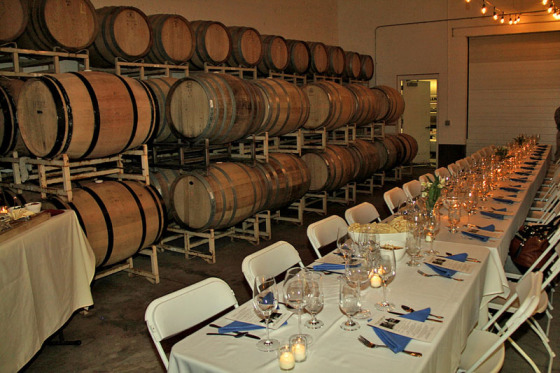 The winter weather outside was frightful, but inside the production building at Anthony Road Winery the scene was warm and inviting for the recent “Cellar Sampler: Dine Among the Wines” event. Wine cellar dinners have been gaining in popularity, and a crowd of nearly three dozen food and wine lovers attended the sold-out event that was hosted by Anthony Road Head Winemaker, Peter Becraft.

The evening featured four of Anthony Road’s unreleased wines that were artfully paired with dishes that had been prepared by chefs Rune Hilt and Guilietta Racciatti of Red Dove Tavern in Geneva, NY.  Unlike most formal wine tasting or wine dinners that feature released wines, a unique aspect of the “Dine Among the Wines” event was the opportunity to experience wines that had not been previously produced, as well as wines that were still developing.

Dinner showcased four wines from the 2014 vintage:  Anthony Road’s 2014 Grüner Veltliner, a 2014 barrel-fermented Pinot Gris, their 2014 Lemberger and the 2014 “Sweet Dream.”  Each of the wines had an interesting backstory that Becraft shared as he introduced each pairing.

The first course was a winter mezze of roasted carrots, beets and turnips that was paired with the Anthony Road 2014 Grüner Veltliner.  The fruit for the wine was grown in a 2.5 acre vineyard that the winery leases to the Cornell Cooperative Extension and Finger Lakes Community College as a hands-on teaching vineyard for students. Students from FLCC’s Viticulture and Wine Technology program maintain the vineyard with assistance from Peter Martini, Vineyard Manager for Anthony Road.

The 2014 is the first Grüner Veltliner that was ever produced by Anthony Road. Becraft described it as having “a focus on the mineral-driven side, rather than on the off-dry side.” The wine was light in color and body, with good acidity and developing balance. Although it is still young, the wine had notes of lemon and other citrus fruits along with herbal and floral flavors that are characteristic of the food-friendly variety.

The winery regularly produces a pinot gris wine, but in a more traditional steel-fermented and dry to off-dry style.  The barrel-fermented version was rich and fuller with smooth vanilla and butterscotch notes. Becraft commented on the well-integrated nature of the wine and suggested that it might be a wine that the winery would produce again in the future. 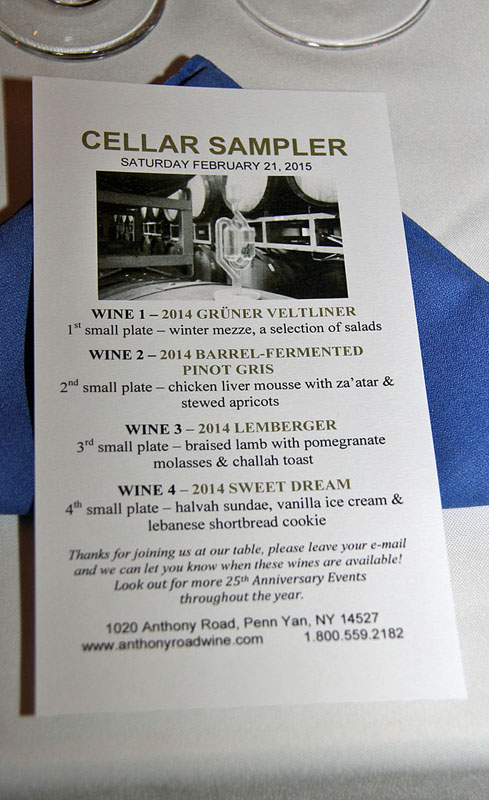 The Anthony Road 2014 Lemberger complimented the main course of braised lamb with pomegranate molasses. The 2014 vintage was unique in that it was the first wine for which Lemberger was used to produce a single, varietal wine, rather than a component of a Cabernet Franc-Lemberger blend. Also, the wine served for the “Dine Among the Vines” event had been aged exclusively in stainless steel and had not had any contact with oak.

The 2014 Lemberger was an energetic, fruit-forward wine that had a well-integrated core of dark fruit including blackberry and black cherry. It also had good acidity and balance which made it an ideal choice to accompany the braised lamb.

The evening concluded with a Halvah sundae of vanilla ice cream and Lebanese shortbread that was paired with the 2014 Anthony Road “Sweet Dream” wine. Fruit for the wine is grown on the vines that are more than forty years old, making them the oldest vines on the Anthony Road property.

As Becraft noted, the production of a dessert wine requires a significant amount of effort both in the vineyard and in the winery. Due to their concentrated nature, it takes a large amount of fruit to produce the wine, making the fruit “precious” in Mr. Becraft’s terms.

Sweet Dream is considered by Anthony Road to be one of their value-priced, entry-level dessert wines.  It is characterized by apricot and pineapple flavors. The wine is made from the Ravat 51 (Vignoles) hybrid.

Based on the reaction and comments of those who attended, the evening was a resounding success. With great food, unique wine and an experience to share with others who have similar interests, it’s easy to see why events like “Cellar Sampler: Dine Among the Wines” are so popular with food and wine enthusiasts. Here’s hoping that other Finger Lakes wineries will follow suit and we will see more cellar dinners throughout the region.